LG’s finally bringing a version of its G8 ThinQ flagship, the LG G8S ThinQ, and a budget device called the Q60, to South Africa. The G8 was launched back in February globally, and this version of it will only be available locally on 8 July.

Sort of the G8 As they say ‘good things take time’, we guess? In terms of specs, the G8S is largely similar to the G8 but is fitted with a lower resolution screen. It has the same Qualcomm Snapdragon 855 chip, 6GB of RAM, 128GB storage as the G8, and like the G8, it also has a 3.5mm headphone jack. The only difference being that the G8S’s 6.2in OLED display has a resolution of 2248 x 1080 (compared to the 3120 x 1440 res on the G8). South Africa will only be treated to the shiny black version and will skip out on the teal and white versions.

The front-facing camera offers “simulated studio lighting” for Insta-ready selfies with a bokeh effect and simulated studio lighting effects, and there’s a triple-lens camera setup on the rear — one of these is a wide-angle lens (obvs). It has the widest field of view of any phone camera to date at 137 degrees and has something called “continuous zoom”. We’ll tell you how well that works once we get our hands on a phone to test. 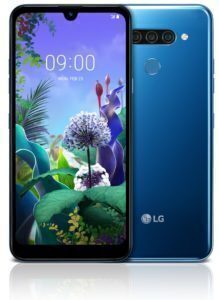 On to the Q60 — it’s fitted with a 6.26in HD+ FullVision display and has one camera sensor up front, and three around the back. The 13MP front sensor features LG’s AI CAM that does exactly what other ‘AI-clad’ smartphone cameras do, namely recognise subjects and tweak the capture settings accordingly. Again, we’ll let you know how well this works when we’ve had a chance to test it.

It also has a 3,500mAh battery under the hood, as well as a 2.0GHz Octa-Core chipset, DTS:X 3D surround sound, a fingerprint sensor and a dedicated Google Assistant button (which can hopefully be re-assigned to, well, something else).