German carmaker BMW has revealed what it thinks the future of electric travel will look like (again) with a couple of new electric-powered concepts. At its NextGen event in Munich, Germany, it showed off the Vision M Next concept car, as well as the super sleek-looking Vision DC Roadster motorbike.

First up, the BMW Vision M Next concept is an i8-inspired plug-in hybrid that features the performance you’d expect from the M-range. So… lots of it. It’s an autonomous sports car — something we feel shouldn’t actually exist, especially if you plan on using it in Sport Mode. Luckily the driver can take control whenever Sport Mode gets too… sporty. We feel we’d be more inclined to go hands-on with BMW’s speedier modes. It’ll take some trust-building exercises before we’re willing to hand that sort of control to a car — even one as attractively slick as the Vision M Next concept. 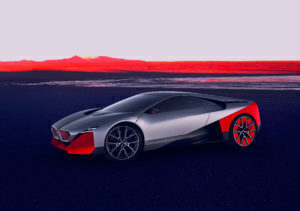 The BMW Vision DC Roadster concept has enough BMW design to feel authentic, while simultaneously sporting a futuristic ‘naked’ design. Paging Shōtarō Kaneda… The Vision DC Roadster features an iconic BMW two-cylinder boxer engine (the shape of one, at least) with a vertically fitted battery. The protruding elements along the sides of the engine are used as a dynamic cooling feature. These pieces actually flare in and out if the bike is moving (or stationary) to cool the batteries. In addition to the Roadster, BMW also unveiled protective riding gear with integrated lighting that’ll easily connect to the bike. The highlight? A asymmetrical rucksack vest that magnetically connects to the two-piece protective suit.

Unfortunately, we don’t have more info on actual specs at this point, because these are just very cool-looking concepts. For now. The pair may or may not make it to market in the future. If they do (and we really hope they will) we’ll definitely have more detailed specs on batteries, motors, torque, and range. Oh, and you know, price.