Samsung’s next high-end smartphone is going to be the Galaxy Note 10. That’s not the result of leaks, or anything official Samsung has said. That’s just the way the world works now. And, just like the sun rising every morning, it’s about time for us to get an early, unofficial look at the Galaxy Note 10.

The folks over at 91mobiles, in collaboration with the chap from @OnLeaks, managed to get their hands on the Note 10’s CAD files. Files that supposedly show what Samsung’s next flagship will look like. With the assistance of the leaked design docs, they’ve put together a series of renders of the Galaxy Note 10. (Which you shouldn’t confuse with the Galaxy Note 10.1 — yeah, Samsung, we remember that one.)

The shape of things to come 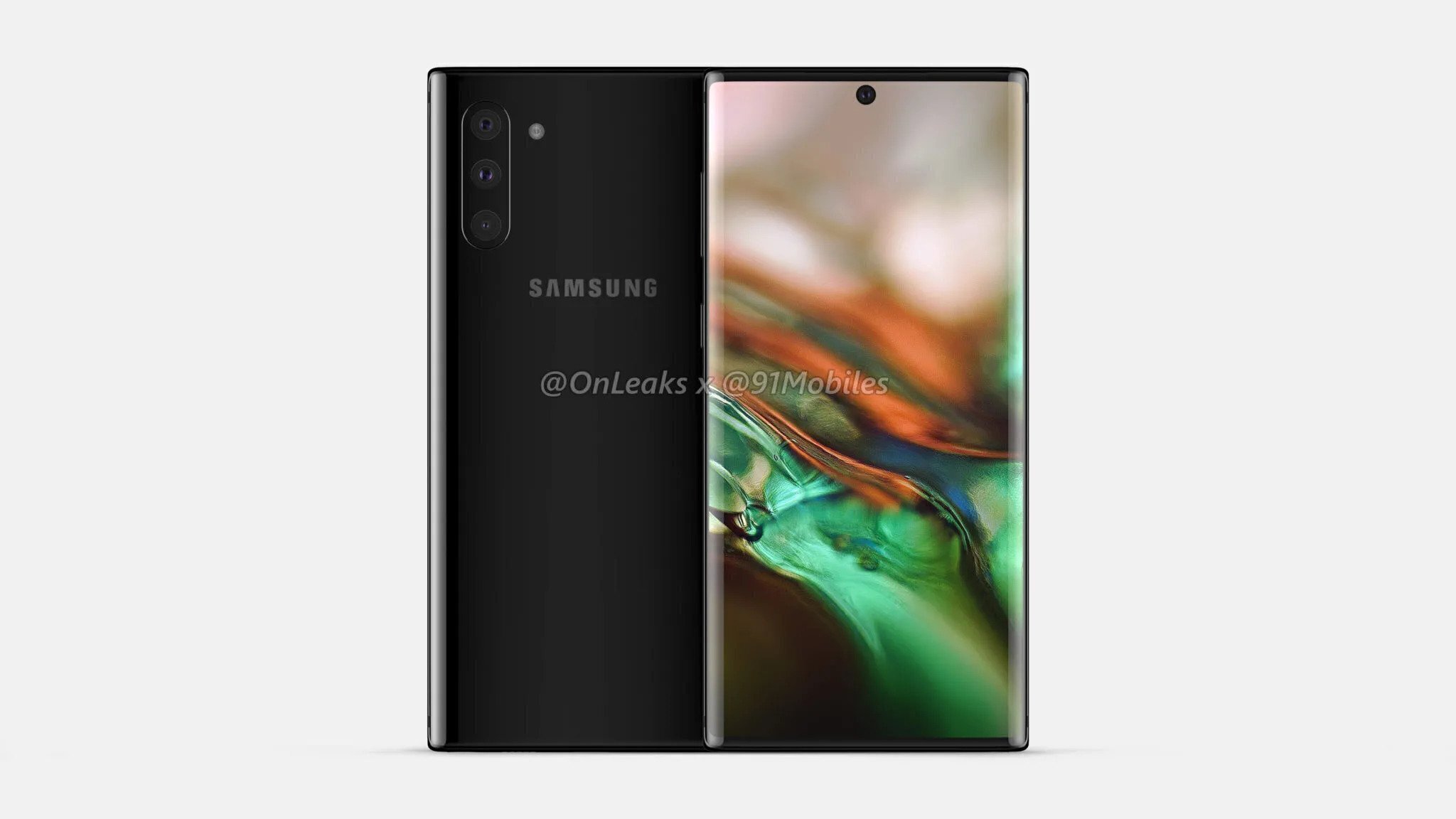 Samsung’s device will be rocking that hole-punch camera we’ve become familiar with from the S10 range. This time it looks to be centred in the middle of the display, rather than off to the side. If that is the case, it’s far from as unobtrusive as its siblings. Might as well just pop a whole notch in the screen.

The edges of the Note 10 are curved on both sides, but Samsung’s gone for a blockier shape that puts us in mind of Sony’s older, high-end Xperia devices. The vertical three-sensor rear lump is very obvious, and we’d be surprised if this one didn’t at least match the Galaxy S10 Plus’ camera arrangement. Even if the sensors are now vertical rather than horizontal.

There are a couple of missing pieces, and we can make a few guesses as to where they’ve gone. The Bixby button is no more — Samsung may have gotten annoyed with folks using it for anything but Bixby. There’s no obvious fingerprint sensor, which is suggestive of another below-display reader, like that found in the S10 and S10 Plus. And there’s also no 3.5mm headphone port, which signals that Samsung could be dropping wired headphone support after all. Boo. The Galaxy Note 10’s specs have been bandied about for a while. The screen is expected to be 6.3in, which is in line with the Note series’ size in the past. A Dynamic AMOLED panel (with a hefty 1,440 x 3,040 resolution) will have that front hole drilled through it. The company’s expected to field a Snapdragon 855 (in the States) or an Exynos 9820 (everywhere else) and at least 6GB of RAM. Reports are suggesting up to 12GB of RAM though, which would be something to see. There will be an S-Pen, because it’s not a Note without one.

There’s also a report of a second Note coming — the Galaxy Note 10 Pro. If it turns up it may be 6.75in in size, with a quad-camera arrangement (including a time-of-flight sensor), 45W fast-charge support. Samsung’s also reportedly planning capacitive keys for the rumoured Pro edition.

As always, we’re awaiting some official word. Also as always, we might have to wait until the expected August launch before Samsung will admit how many of its secrets have escaped.