World War Z, if you know where to look, has been around for a considerable length of time. There’s the Brad Pitt film, which turned up in 2013, but the so-so movie was based on a far better book by the same name. The 2006 book was itself the sequel to the equally-excellent Zombie Survival Guide. It’s taken quite a while to go from book to game.

Developers Saber Interactive have taken most of their inspiration from the World War Z motion picture, however. Most of the extensive lore from the books is left on the wayside in favour of pyramids of zombies and gameplay that is… rather bloody familiar. But more on that in a minute.

We might seem to be complaining about this but that’s not really the case. The slightly derivative gameplay, the chaotic zombie activity and the way that Saber have blended the two? It actually makes for a pretty fun game.

Due to international copyright law… It might look like a duck and and quack like a duck but this zombie game isn’t the other zombie game. World War Z has taken a whole lot of inspiration from Valve’s Left 4 Dead games — the main premise is certainly spot-on. Players can take on the undead environment in teams of four, roaming several locations while attempting to survive against the ravening horde.

Mostly you’re trying to get from start to finish but it’s no stroll in the park. As with its predecessor, you’re not just running and gunning from A to B. You’re going to have to hit up quite a range of objectives on the way through and it’s not going to be especially simple. Teamwork is the name of the game. Very Left 4 Dead, yeah?

The similarities continue with the weapon options — but that’s a little difficult to avoid in a zombie shooter. SMGs, pistols, assault rifles, and shotguns are all over the place. Unlike Valve’s shooter, weapons are ranked and some are obviously better than others when it comes to putting down Zeke.

Same taste, half the calories And then there are the special infected. Which isn’t the term from the game but we’re sticking to it. There are special enemies roaming the hordes, ready to make life a pain in the brain. There are tank, toxic, and lurker classes, who will rip through opposition, poison their surrounds or leap at you from unexpected places. There’s also a class — the Screamer — seemingly borrowed from Microsoft’s State of Decay, which endlessly summons more zombies. Those little buggers hide in inconvenient spots, meaning you’ve got to leave relative safety to take ’em out.

However, these critters lack the punch of the special infected in Left 4 Dead and State of Decay. The Bull will go down to concentrated fire from just half your party. If everyone opens up, he won’t manage to knock anyone down at all. The Lurker falls easily to regular gunfire (if you can catch him in time), while the exploding Gasbag doesn’t pose much of a threat at all. A Boomer, he is not. The Screamer also isn’t a challenge, provided you can get to it safely.

Keeping an eye out Visually, World War Z isn’t exactly pretty. The only folks who’ll see the beauty in this one are the same folks who go nuts over Cannibal Corpse album covers. Blood, guts, the leftovers of many a gristly encounter — it’s really not aesthetically pleasing. Effective, though.

You might find some beauty in the movement, however. Zombies scramble over each other, creating the same effect seen in the WWZ motion picture but on a bunch of smaller scales. Watching them in motion can be entrancing enough that you’ll suddenly find them veering into view far too close.

Player models are also very well rendered and animated. Saber might have given the game a third-person perspective to set it apart from Left 4 Dead but we like to think that they’re also showing off the character work the team put in. Like the motion picture, World War Z sends players to several locations around the world. In order, there’s New York, Jerusalem, Moscow, and Tokyo to play in, with each location split into smaller locales and missions.

If you want to tear through the game, you can clear the campaign in a few hours. You’re not supposed to just play the game once, however. Multiple playthroughs are the order of the day but unlike Left 4 Dead, there’s a lot less randomisation when you attempt a level more than once.

To make up for this, there’s a levelling system built around increasing difficulty levels. Like Diablo III‘s Torment system, kinda. Players can play each character as their chosen class, a really nice touch, but as long as you’re playing a set class, you’re levelling up that classes’ abilities. It’s a neat way to keep progression going over the various locations, as each area has its own playable characters.

And you’re really going to want to have your classes levelled as high as possible, since higher difficulties make life considerably harder. It’s tough enough defeating the horde, but then you have to try and do with without medkits and with other handicaps as well. It’s the sort of thing you want to play with friends. Matchmaking with randos is fine, but it helps to know who has your back at any give time. And if you’re not social at all, it’s possible to play with AI companions but they don’t really care about what happens to you. Just like the simulations… 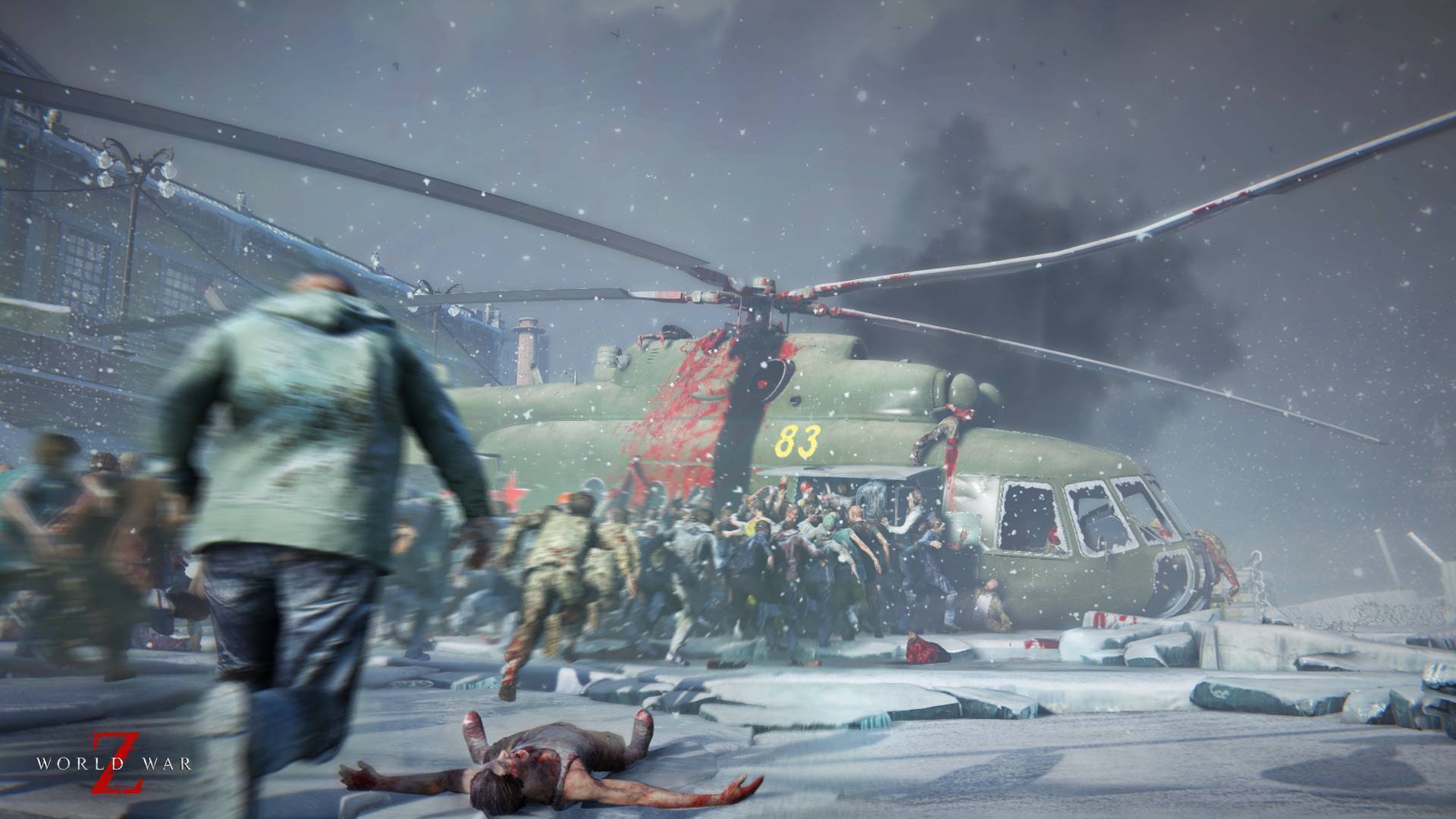 Besides the co-op PvE, there’s also a PvP mode — there’s a deathmatch option for folks who need that sort of thing. It’s quite an unusual sight, because Saber has played it straight — it’s an actual deathmatch, of the sort you’d see in just about any shooter.

The difference here is that players will periodically have to fend off the zombie horde in addition to worrying about being shot in the back. Or the front, we guess. Back is safer for attackers, though.

It’s an interesting enough addition but it’s not much of a drawcard. It’s great to have the option but you don’t want to base your enjoyment of the game on it. Does it extend the game’s longevity? Sure. Will you spend more time here than in the PvE? Probably not.

World War Z does a lot of things right. Those things have also been done right in the past, though, by Left 4 Dead. And Valve’s shooter arguably did them better. But since we’re still waiting for a Left 4 Dead 3 and World War Z is here, it’s not hard to recommend this one. It’s fast, frantic, and has hordes of zombies for you to pump bullets into. It’s best played with friends, as is the other four-player co-op zombie shooter, and it’ll provide you with at least a few hours of scrambling zombie action.

World War Z, if you know where to look, has been around for a considerable length of time. There's the Brad Pitt film, which turned up in 2013, but the so-so movie was based on a far better book by the same name. The 2006 book was itself the sequel to the equally-excellent Zombie Survival Guide. It's taken quite a while to go from book to game.