At long last, a flagship smartphone that won’t make your wallet look like a scolded puppy. Samsung’s Galaxy S10+, as well as Huawei and Apple’s prime offerings, all ask around R20k for their weight in your pocket. It’s refreshing to see the Galaxy S10e, a handset with most of the power possessed by its peers, come in at… well, cheaper. Now those with less well-endowed bank accounts can experience top-shelf smartphone bliss.

The reduction in price comes at a bit of a … er… price, really. Samsung’s stripped back a few features. But before you go thinking that this is less of a flagship phone, you could do with some correction. The Galaxy S10e is still more phone than most. And, in at least one way, it’s also the best S10 variant on the market. Two ways, if you count the price.

The sound of one-hand clapping Folks with smaller hands are very aware of just how large smartphones are getting. At 5.8in, though, Samsung’s S10e is a lot easier to manage than its 6.1in-upwards siblings. That makes it easier to have and to hold, to fiddle with one-handed. Best of all, you’re not constantly worrying that you’re going to swipe the thing onto the floor because of its bulk. The flat front screen also makes it a little easier to grip than its curved, pricier brethren.

But you’re going to want to be right-handed. Samsung’s gone for a new fingerprint sensor placement — along the edge, right where a thumb can be conveniently placed. Unless you’re a lefty, in which case you’re in for some index-finger yoga in order to easily unlock. We actually like the placement here more than on the S10 and S10+. It helps that the sensor’s faster than the in-display version, too. The sensor is also the S10e’s power button, and you can swipe it to pull down the notification tray — handy if you have really, really small hands.

In true Samsung style (of late) the S10e is still metal and glass. Just because it’s the younger sibling doesn’t mean that it’s had to make do with cast-offs. Plastic is so Galaxy S5. Samsung’s still showing love for the headphone socket, which stands proudly next to the USB-C charge port. The build is all-premium. It’s just a little smaller than we’re used to.

The concessions? There’s one fewer camera on the rear, and Samsung’s gone and ditched the heart rate sensor that just about nobody uses. Translation: The camera lenses aren’t quite as prominent as we’re used to. That bump was kinda handy in keeping Samsung’s smooth smartphones from sliding, though, so you’re going to want to wrap this one in a case, soonest. The S10e’s screen might have experienced somewhat of a downgrade — it doesn’t curve, and it’s got reduced resolution compared to the S10, but that doesn’t mean it’s any kind of slouch. Samsung’s AMOLED panel is a better-than-HD 2,280 x 1,080 affair with a single hole-punch camera peeking through the glass. Not that you’ll see it after a few days of use, it’ll just become sort of normal for you.

The panel itself is excellent, offering enough detail compared to QHD+ panels (seen in Samsung’s other phones) that you’ll need a magnifying glass to spot the difference. The display is as bright as you could want from an OLED screen, so outdoor use is a breeze. So are the viewing angles, letting you read tweets at just about any orientation (besides ‘flipped’, that is).

The S10e uses Samsung’s ‘natural’ colour mode as standard, which isn’t quite as vivid as Samsung’s previous efforts. If you liked the almost-garish look of older Samsung phones, though, you can always swap back to something with a little more… personality. Contrast is excellent, in keeping with OLED’s capabilities. There’s support for HDR10+ and Samsung’s stereo speakers make for a mighty media machine. No need for headphones while watching Netflix unless you’re out in public, you ill-mannered person, you. It’s been a long time since Samsung’s Touchwiz-flavoured Android operating system made facial muscles tic in the Stuff offices. Android Pie and Samsung’s One UI show just how far the company has come since those what-were-they-thinking days.

The Galaxy S10e has clean icons, a fair-sized font, and a simpler interface design — the sort of thing that Android newcomers (if there are any of them about) will feel comfortable with. The UI is still close enough to previous efforts that long-time users will find things familiar.

As far as apps go, if its on the S10 you’ll also see it here. All of the apps, up to and including those lovely Edge Screen shortcuts. In spite of the S10e not featuring an actual edge… er… screen. Bixby is in place, on the device and with its own dedicated key. The virtual assistant has been tidied up some, making it easier to use and — dare we say it — even useful. Unless you’re used to Google’s own Assistant. Bixby’s got some competition to beat, still.

Gesture controls are present for those who reckon that keys are ancient history. Samsung’s gone for three simple ‘zones’, which can be swiped for back, menu, and recents. You don’t have to use gesture controls, but they’re simple and handy here.

Enough to be getting on with The Galaxy S10e might lose out on 2x optical zoom but that doesn’t make its snapper any less great. Okay it does, a bit, but the camera hardware that is included is mighty great on its own. The 12MP, dual f/1.5-2.4 aperture main sensor and backup 16MP f/2.2 ultrawide handle images from the rear. There’s a 10MP, f/1.9 camera up front. OIS is present to shore up shaky aim, and dual-pixel autofocus ensures that image acquisition and capture is quick.

Having a wide-angle sensor gives you options when it comes to composition and there’s not much of a quality drop compared to the main sensor. You’re well within your rights to chop and change, hunting for a better shot. Swapping between the two sensors is as speedy as you’d like.

The camera app is where much of the magic happens. Samsung’s included more modes and settings than you’ll know what to do with. Live focus depth blur, AR emojis, Bixby Vision, and the company’s intelligent scene recognition mode allow you to get your tweak on without doing too much thinking. You’ll find the results a little hit-and-miss but when it does miss, it’s not by much at all. 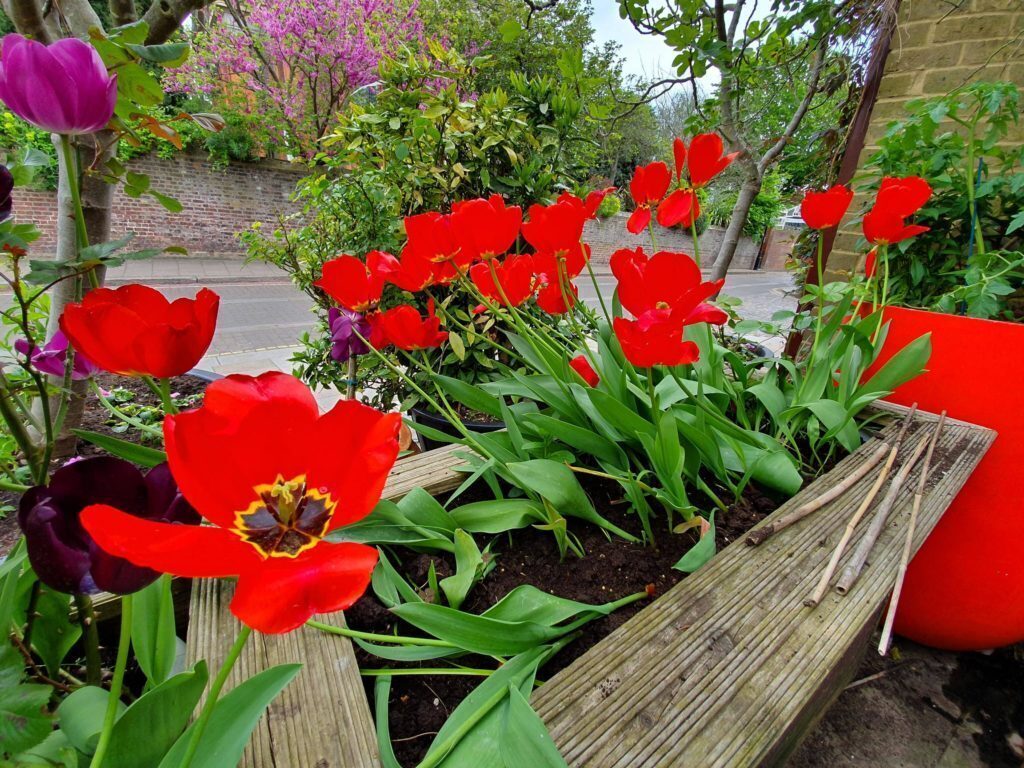 Does the S10e nudge aside other cameras in its race to the front? Not really. There’s a lot of competition on the ground, and not just from its older siblings. The Huawei P30 Pro’s low-light chops outshine it by some measure.

Daytime images are highly detailed, though. Colour and HDR balance are well done, too, though processing can be over-sharp at times. Samsung’s systems can rob shadow-heavy images of some of their depth but natural settings tend to be very visually pleasing. And South Africa’s packed with lovely natural settings, after all.

There’s a Bright Night mode that’ll help if you’re in some nastier low-light situations, though Google’s own Night Sight (for the Pixel) and Huawei’s low-light performance have this one beat by some measure. Then again, those other handsets cost a fair bit more, and the have their own problems, mainly that Huawei’s future access to Google software is uncertain, and Google’s handsets aren’t readily available here. With the S10e you get a lot of camera for not a whole lot of money. Relaftively speaking.

There’s no concession to the larger S10 phones when it comes to power — Samsung’s Galaxy S10e uses the same Exynos 9820 octa that powers the rest of Samsung’s headliners.

It’s one of the fastest mobile processors ever, standing alongside Qualcomm’s Snapdragon 855 (which lives in the US versions of Samsung’s flagships) and Huawei’s Kirin 980 headliner. The only way for you to really tell any difference between them it by running benchmarks and even then, Samsung’s Exynos hardware tends to stand on top of the pile.

Samsung’s gone for 6GB of RAM here, rather than 8GB (as found in the big boys), but you’ll only really notice the step down if you’re testing the phones side-by-side and you just keep on opening apps until there’s a slight hint of slowdown. In real-world use, you can expect it to be fast and furious. Okay, mostly fast. There are very few reasons to be furious about lag-free performance. Apps and games are perhaps a little spoiled with 8GB of RAM at their disposal.

And there’s no performance benchmark like gaming. The S10e runs the most popular (and resource-heavy) titles, like PUBG Mobile and Fortnite, at their best settings without any issues.

128GB of storage is more than enough for most, unless you’re constantly adding more media and images. If this is you, you can pop in a microSD card for some extra space. The only place you might have concerns would be the battery. 3,100mAh is a little small for a flagship, and the S10e does seem to flag behind its buddies here. It’ll still get you though a full day with moderate use, and only heavy users will feel the need to hit the wall socket or charging pad before bedtime, but we wonder how that’ll change over time. Still, some corners had to get cut, right? That’s quite the saving from the Galaxy S10’s current price of R17,000 or so (also down from a launch price closer to R20,000). The couple of thousands of rands saved makes quite a difference to your pocket. If you’re on contract, though, you’re looking at not all that much more per month for your smartphone if you decide to go for the full-fat S10.

But if you’re after a smaller-sized Galaxy S10, then the S10e is your only port of call. It’s getting harder and harder to find a smaller phone with flagship specs. That’s part of what makes the S10e such a great buy.

That said, Samsung’s smaller, cheaper device isn’t actually all that small or all that cheap. Price drops and the odd online discount, though, will turn thing one into a major bargain in the coming months. All the power of the bigger handsets and just a little camera downgrade? That sounds like a deal to us.

It's refreshing to see the Galaxy S10e, a handset with most of the power possessed by its peers, come in at... well, cheaper. Now those with less well-endowed bank accounts can experience top-shelf smartphone bliss.