Fujifilm South Africa has confirmed the latest addition to its acclaimed, medium-format mirrorless GFX range will be coming to our shores (and stores) later this year. Dubbed the GFX100, the new camera has a mind-bogglingly large 102MP sensor, giving it twice the resolution of its siblings, the GFX 50S and 50R. We don’t have an exact date or confirmed pricing, but as the global release is scheduled for the end of June 2019 and US pricing is $9,999, we’re expecting to see the GFX100 land here in July or August, with a price tag of at least R150,000.

The GFX100 gets to boast a number of firsts, according to Fujifilm. First up, it’s got a back-illuminated sensor with phase detection pixels (something you usually only find in full-frame or smaller sensor cameras). Second, there’s in-body image stabilisation for the sensor (likewise, something normally limited to smaller sensors), and third, the GFX100 can shoot 4K/30P video.

Phase detection makes for better autofocus (AF) capabilities than early GFX models (twice as fast, in fact), while the five-axis images stabilisation (that offsets pitch, yaw, shift and roll movement) should make it even easier to shoot handheld without introducing blur into images. The new cam also employs the same phased detection AF algorithm found on the recent X-T3 and X-T30).

Videographers, meanwhile, can look forward to not just 4K/30P recording, but also support for the H.265/HEVC compression codec (as favoured by Apple on recent iPhones that makes for smaller files without reducing quality) and HDR (high dynamic range) recording. Fuji’s also adding its Eterna film simulation to the existing options that mimics the colours and tones of the companies cinema film of yore.

Look, being a medium-format (MF) camera the GFX100 is naturally going to be heavier than full-frame equivalents… but not by much. Tipping the scales at 1.4kg and with a built-in vertical grip (like Canon, Nikon and Olympus’s pro-grade snappers), the newest GFX is nonetheless likely to be the most portable and hand-holdable MF camera out there.

Fujfilm’s usual magnesium alloy inner combined with the sort of weather sealing found on its X-H1, X-T3 and X-T2 camera bodies means the GFX100 should also be able to handle whatever wet, dusty or sub-zero conditions you can throw at it. We once rinsed a champagne-covered X-T2 under a tap at a wedding, so can attest to both the usefulness and veracity of the company’s sealing skills.

What is power without control? Villainy, that’s what. But fear not, good photographers of the world, Fuji gives you plenty of control over the power of the GFX100. There’s a new 2,05in monitor beneath the rear 3.2in touch-capable LCD that lets you view exposure compensation or other settings at a glance. 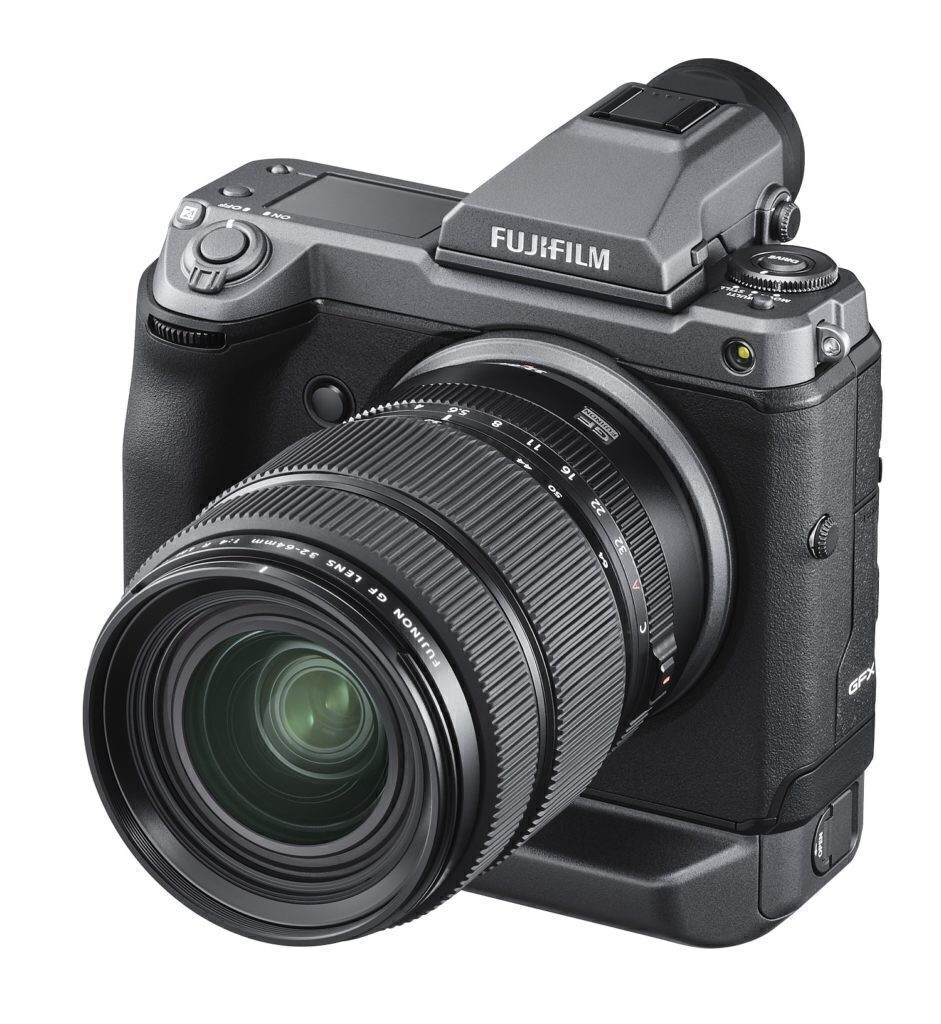 There’s also a new 1.8in LCD up top that includes a ‘virtual dial mode’, giving you even more ways to harness the cameras slew of controls. It is, after all, a professional tool. If you’re looking for automatic modes and other hand-holds, you’re looking at the wrong camera.

As you’d expect, there’s also an improved electronic viewfinder (EVF) — now with a new OLED screen — and support for the detachable EVF system introduced with with GFX 50S. We could go on, but if you’ve gotten this far and you still want to know more… you should probably just head over to Fujifilm’s official GFX100 page, and expect to lose the rest of your day.

We’ll bring you more info when we have it. For now we’re wondering if we’ve forgotten about a car or something else big we own and can sell in anticipation of the GFX100’s launch.