DJI, the company best known for its drones and camera gimbals has announced a new piece of kit that’s likely to have a lot of GoPro execs feeling nervous. Called the DJI Osmo Action, it’s a 4K action cam in the style of GoPro’s iconic Hero range of devices… aside from offering impressive specs on paper it’s got one particularly compelling challenge to GoPro’s dominance: at R7,000, the Osmo Action is R1,000 cheaper than GoPro’s latest flagship.

Twice the fun for your face

One of the first things you notice about the Osmo Action is that it’s got a pair of colour displays, one up front and one around back. That means its ideal for selfie-inclined adventurers looking to capture their own mugs while barrelling down a ski slope… or the face of a barrel of water. It could also make it popular with the vlogging crowd looking for a rugged, versatile and compact camera. 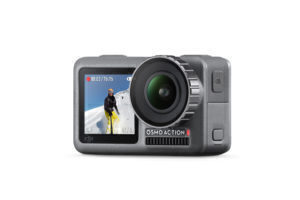 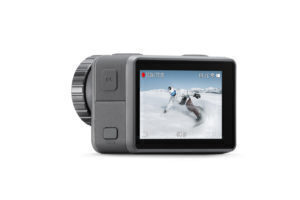 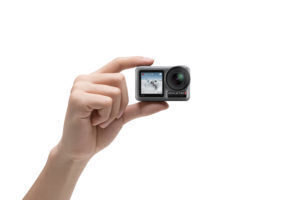 The Osmo Action also includes electronic image stabilisation, backed by DJI’s extensive experience in the gimbal space. That’s a feature GoPro already offers, but it’ll be interesting to see how DJI’s take on it compares.

Like its rival’s top-end kit, the Osmo Action is waterproof out of the box. Also, it looks to us like DJI’s opted to use the same mount GoPro does… which should make it easier to win over die-hard GoPro fans who’ve already invested in a range of accessories. And a particularly pleasing feature of the Osmo Action is the inclusion of ND and other filters, and the removable front lens system that supports them. DJI says its new action cam should survive drops from up to 1.5m, endure underwater action at up to 11m without an additional housing, and keep shooting even in temperatures as low as -10C. The rear 2.25in touchscreen has a water and fingerprint repelling coating. The front display is a 1.4in offering, and like the rear display goes up to 750 nits of brightness.

Image and video capture comes courtesy of a 1/2.3in sensor capable of snapping 12 MP stills and 4K video at up to 60fps (and 100Mbps). DJI’s electronic image stabilisation tech, called RockSteady (no Ninja Turtle jokes, please) works even at maximum res, though HDR recording is limited to 4K/30fps. Slo-mo options are 1080p/240fps (8x) or 1080p/120fps (4x).

According to DJI, the Osmo Action’s removable battery is good for around 90 minutes when shooting 4K/30fps with stabilisation on, or up to 135 minutes, if you can face 1080p/30fps with RockSteady turned off. In other words, if you’re going to max out the res and use the stabilisation smarts, you’re probably looking at 45 minutes of shooting time tops. That’s perfectly reasonable if you ask us, given the cam’s diminutive dimensions. Plus, you can spring for the optional charging hub that’ll juice-up a trio of batteries in just over two hours.

Beyond the stabilisation, other smart software features include support for voice controls, the ability to shoot time-lapse videos, long exposures up to 120 seconds, and support for DJI’s recently launched Mimo app that allows for content transfer to mobile devices via Bluetooth or Wi-Fi, live feed support and editing on the run. The Osmo Action is due to arrive in South African retailers at the end of May. We’ll have a review up as soon as we’ve gotten some quality time with one. Now then, where did we put that longboard?