You are at:Home»Uncategorised»You can only buy Range Rover’s Virgin Galactic Astronaut Edition if you’re going to space

How far would you go in order to secure a limited edition… anything? Would you be willing to pay extra? Do something silly on camera? Travel large distances? Yeah, about that last one… Land Rover has an upcoming Range Rover dubbed the Astronaut Edition, a partnership with Virgin Galactic. The catch? You’re going to have to sign up to travel to space if you want one of your very own. To infinity and beyond?

Land Rover’s making the vehicle a mighty attractive proposition, for those who are of a space-faring bent already. And just those who are fond of luxury SUVs. The Range Rover Astronaut Edition is based on the Range Rover Autobiography, at least mechanically. The vehicle will ship either with Land Rover’s plug-in hybrid P400e engine, which offers 297kW of power, an EV range of 48km and CO2 emissions of 72g/km. That’s the eco-conscious option, but that’s also subject to availability. Land Rover’s also going to have a 416kW 5.0-litre V8 supercharged petrol engine on offer, for those who prefer more traditional rides.

So far, so good. So what? What makes the Range Rover Astronaut Edition stand out? Why is it limited to folks who have bought a Virgin Galactic ticket to space? Do you have to have completed the trip in order to take delivery of the car? On that last one, the answer’s ‘no’. You just need to have bought a ticket, though there’s an interior upgrade waiting for when you return to terra firma. But more on that in a second. That’s obviously not all. The really unique feature is an interior section made from part of Virgin Spaceship Unity’s front landing skid. The section, which has already travelled to space, forms two discs near the Astronaut Edition’s cup-holders. Pre-launch, it’ll feature a quote by Virgin Galactic’s Richard Branson — “See you up there” — as well as details about Unity’s flight. Post-launch, it’ll be swapped out with a section of the landing skid used for the driver’s trip into space. Details of the driver’s flight will be placed on the replacement section. That’s… pretty far to go for a very limited edition vehicle, we think. 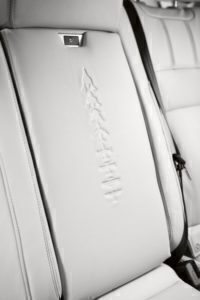 There are other additions as well. There are dual ‘DNA of Flight’ graphics (pictured above) in the interior. The door handles will feature Virgin Galactic’s Future Astronaut community constellation pattern, and this design is featured elsewhere as well. And drivers can opt for various personalisation options, including having their initials stitched into the rear of the headrests. If you’re buying a luxury SUV to commemorate your trip to space, you might as well go all the way, yeah?

As for the cost? Besides the ticket to space (which you better already have, dammit), you’ll be paying at least R2.7 million — which is the price the (standard) Range Rover Autobiography starts out at.