It’s been a long time and a lot of hours between the private beta of The Division 2 and our (eventual) review of the final game. There were massive downloads to contend with — never fun for South African players — and a little launch day shakiness. But we managed to get through it all and liberate Washington DC. In a manner of speaking, because at that point the game’s only just begun.

This is what we think of The Division 2 so far. The journey isn’t over yet, we expect to be playing this one for at least the rest of the year. Ubisoft has updates planned for a long, long time.

Do we really need a reason? You might be wondering why we’re out here doing all this. And by ‘all this’ we mean taking on roving bands of enemies, capturing outposts and undertaking upgrade missions for various groups of nice folks in the ruins of Washington DC. For that context, you’re best served by heading back and playing the first Division. That whole deal with New York being decimated by the Green Poison biological attack? That holds true here, but the details are never really fleshed out. Nor is the story, really.

Players take the role of a Division agent, routed to Washington DC in the hopes that they’ll be able to assist in getting some semblance of (modern) normality back to the decimated city. There’s another little bit of poisoning around but it’s died down. Mostly. That’s… about it, that’s all you really need to know. There are some story notes, as players clash with the various factions (Hyenas, Outcasts, and the True Sons) throughout the game, but nothing especially… worth remembering. Why are we shooting at these guys? Because they have a tendency towards taking hostages and, hey, they started shooting at us first.

That’s what the story boils down to. You = good. Enemies = bad. The people you’re helping? They’re refreshingly human when they’ve got screen time but they’re also ultimately forgettable.

Leave no man behind 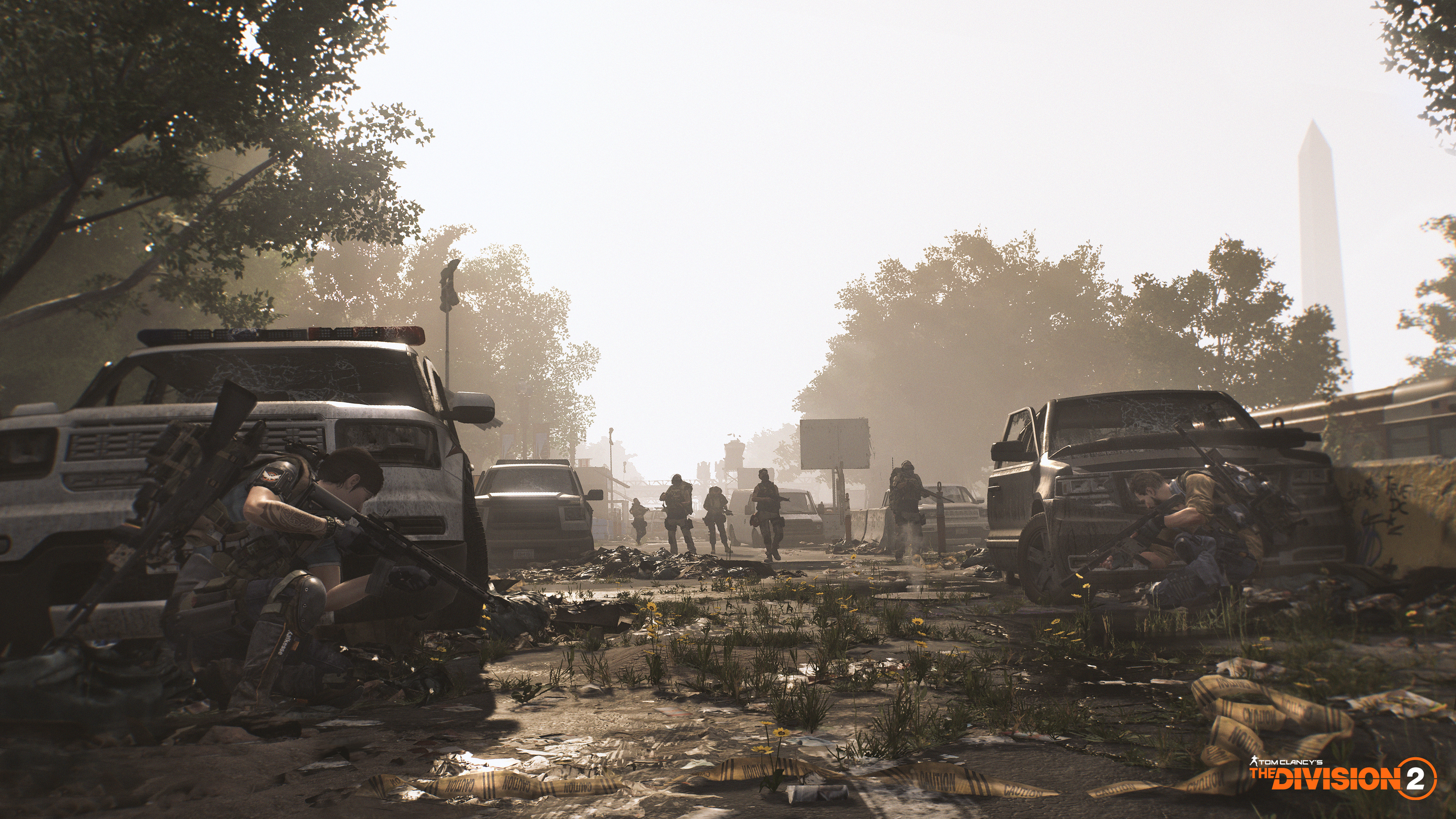 Which might normally be cause for concern but The Division 2 has the gameplay to make up for any story deficiencies. Player movement and combat have been well thought-out, to the point that you’ll always feel like you’re taking part in the world. Roaming Washington solo is just what you’d expect from guerrilla warfare — periods of calm followed by frantic bouts of shooting, panic, diving for cover and, occasionally, being sent back to the last spawn point. Because, well… you’re alone. And while you shouldn’t be, you can take on an ever-changing world by yourself if you want to. It’s still fun, with random NPCs and sometimes actual humans coming to your rescue when you least expect it.

But the way to play The Division 2 is with friends or at least a complete squad of four (hopefully competent) humans. During the review, we traipsed around with the trio of Zoodiac77, Drcrumhorn, and COLD_WAR_AK47 (DrakonisLocal was the review account), getting into all kinds of scrapes and getting out of the same.

The Division 2 ramps up difficulty dynamically every time you add a new team member, but never to the point of being overwhelming. In fact, taking on greater numbers with more elite enemies on-screen is still easier than playing solo. This is thanks to the squad-based mechanic Ubisoft has been refining since the early Rainbow Six days. Four players means all four directions can be covered at once. There’s also always someone to revive teammates, though that doesn’t stop you from experiencing a squad-wipe every so often. Don’t cover your angles and a heavy with a minigun or an operator with a remote-controlled explosive car will make life very unpleasant, very quickly.

This is my rifle, this is my gun… Having two to four players means having a greater spread of weapons. Everyone carries a sidearm, nobody ever uses them. But set up a team with a sniper/rifle combo, an LMG/SMG unit, a shotgun for close quarters, and perhaps a dedicated assault unit (assault rifle/rifle) and you’re looking at a very good spread of tactical options. LMGs lay down suppressing fire while the sniper takes care of the long guns. The assault and shotgun members can use that gap to flank and take out your opponents. Tactics make all the difference. But the game AI also knows how tactics work, so you’re going to have to be better. Preferably with backup in your corner.

Tactical play takes on even more importance when you finally finish the main story mode — because that’s really where the game starts. Everything up till that point has just been a learning experience, to get to Level 30 and max out the initial set of skills. After that is the endgame, which sees the whole map taking on new characteristics and a new faction enter the arena. It’s also where players unlock specialisations, one of three classes that have their own set of upgrades and an additional weapon slot with powerful but limited ammunition. Want to pop fools in the head or lob grenades into masses of foes? You’re going to have to liberate DC at least once.

Because that’s when the Black Tusk turn up. These guys are faster, smarter, and generally better equipped, and they’ve got the tactical abilities to make solo play an irritation. But with a decent team-mate or two to watch your back, and the benefit of some 20 hours of combat experience, they’re not too much to handle. And, they’re only just the start. See, once you finish the ‘main’ story, you’re let loose on Washington again. Only this time you’re not playing The Division 2, you’re playing Diablo. With guns. No, not Borderlands. Kinda close, though. The system of loot crates on level-up, large quantities of weapons and armour in boxes, and half-hearted crafting is replaced by an all-new system. Crafting items becomes more important, provided you’ve levelled your workbench. Breaking down items needs to be balanced with selling them and your gear matters in a way it didn’t at the outset.

Which is why you’re expected to work on armour sets. There are high-end set bonuses, items that match player specialisation, and the ability to socket upgrades into almost everything. The point is to get your gear score — a numeric value — high enough to let you tackle higher-end missions. Items that are nearly perfect can also be modded at the White House. That’s a process analogous to visiting Diablo‘s enchanter. There’s also smithing (weapon and armour crafting), a gem-smith (you, and a bunch of upgrade mods), and stores to interact with. That’s in addition to completing rotating Projects, for cash, XP, and sometimes recipes and items. Once you’re done with the main story, the statistics come out. And you’re going to want to pay attention because the challenge is real. And, happily, you can’t buy your way out of that.

Yes, there are microtransactions Yeah, you can totally spend real money in The Division 2. We know, right? But Ubisoft seems to have a handle on this. The items you can buy are all cosmetic and therefore optional. Though, there are mechanisms in place to tempt you into spending that real-world cash. Mechanisms like finding part of a complete outfit in a crate in-game (that happens too) or as part of a limited-time event.  There’s some gentle nudging you towards ‘completing the set’. No pressure. Really.

But it’s mostly vanity items, or lootbox unlocks, that you’re paying for. If you decide to pay for them. Not participating just means that you won’t look as fancy as some of the folks you encounter as a drop-in, part of The Division 2‘s asynchronous multiplayer, or in the multiplayer-specific Dark Zone. No biggie. Players will earn in-game currency that will allow for the creation of loot box keys or will nab a couple of free boxes just by playing. And, as mentioned, you can also unlock items by finding them in-game. They’re nice to have, but not essential. That’s the only way that loot boxes and paid items are ever acceptable. Good enough, Ubi, good enough.

The Division 2 could have a stronger story but there are some very decent bits to be found out in the world. They just don’t stick in the mind the way Ubi’s tales usually do. The gunplay and multiplayer awesomeness make up for it, though. You’re here on a mission and that mission requires other Division Agents. Ubi’s made that part a whole lot of fun. Doesn’t matter if you’re a team of two-to-four taking on PvE or a group of four heading into the PvP Dark Zone. We’ve tried that solo and you really, really want some friends nearby. And with at least a year of new content heading to Division 2, players have a lot to look forward to. You’re learning new things until the first time you finish the game — that’s an achievement on its own. If you need a shooter with legs, this one’ll have you covered. For a while, still.

It's been a long time and a lot of hours between the private beta of The Division 2 and our (eventual) review of the final game. There were massive downloads to contend with -- never fun for South African players -- and a little launch day shakiness. But we managed to get through it all and liberate Washington DC. In a manner of speaking, because the game's only just begun.