You are at:Home»News»Phone News»Samsung announces seven (yes, seven) devices for its new Galaxy A range

At an Unpacked event in Hong Kong today, Samsung announced seven new devices that will join the Galaxy A range — the A2 Core, A10, A20, A30, A50, A70 and the A80. The Galaxy A series is known to feature great specs at a more affordable price than the company’s successful flagship range, the Galaxy S-series.

We know what you’re thinking…

Samsung has decided to bring a stop to its Galaxy J range, and merge it with the current A range. The company says this has allowed it to create a range that includes something for everyone. With the base model, the A2 Core starting out at R1,300 — the company is likely planning to flood the market with As.

The most interesting of the newly announced devices is the A80, which features a sliding front-facing camera that vanishes when closed. All seven new devices will come to South Africa and will be available from June 2019. Below, we’ll have a look at a few key devices in the range. The A80 has a 6.7in bezel-less display that isn’t burdened with a notch. Because it makes use of a ‘Rotating camera’, that turns the back camera sensor to the front when prompted. So, the A80 only has one set of camera sensors that are used both on the rear and the front.

It features an In-display fingerprint reader like its big brother, the Galaxy S10. It is powered by the newly unveiled Snapdragon 730G SoC, an octa-core processor with two cores clocked at 2.2GHz and six cores clocked at 1.7GHz. This is coupled with 8GB of RAM.

Coming to the highlight of the A80, its rotating camera features a triple camera setup. It’s made up of a 48MP (f/2.0) primary sensor, a secondary 8MP camera with an ultrawide-angle lens, and a 3D Depth-sensor for portrait shots.

When the user selects selfie mode, the three cameras automatically pop-up and rotate to the front. Other features on the Samsung Galaxy A80 include Super Steady video mode, Scene Optimiser with detection for 30 scenes, and Flaw Detection. The Galaxy A30 features a 6.4in FHD Infinity-U Display with a teardrop-shaped notch — a feature we knew we’d see more of this year. Around the back, it features a fingerprint sensor set in either a white, black, red or blue exterior.

Camera-wise, it features a dual camera with a 16MP (f/1.7) sensor and a 123-degree ultra-wide camera. On the front, it has a 16MP selfie-camera with a feature called ‘Selfie focus’, which is used for a bokeh portrait effect.

One of our fave features is definitely the 4,000mAh battery that also supports Samsung’s 15W Fast Charging for speedy topping up. The A30 comes with 64GB internal memory and 4GB RAM. 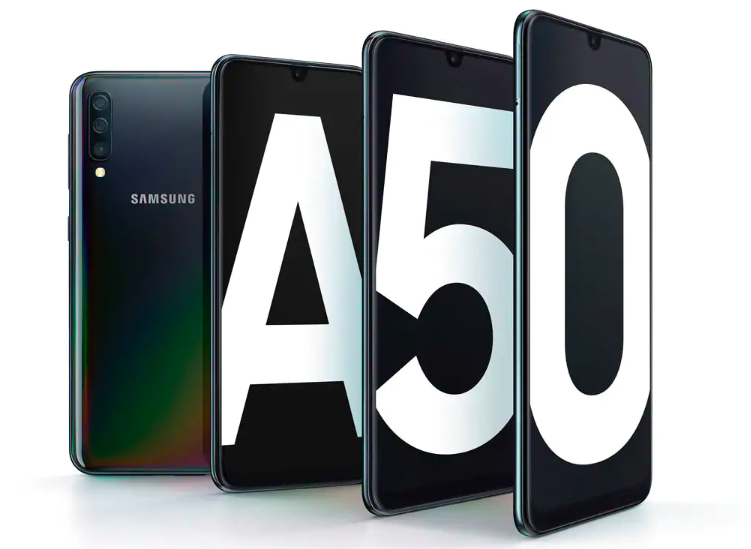 The Galaxy A50 features slightly better specs than the A30, with 128GB of internal memory and 6GB RAM. It features a 6.4in FHD+ Infinity-U display with an in-display fingerprint reader.

Around the back, you’ll find the camera-setup, which includes three cameras — a 25MP (f/1.7) main snapper, an ultra-wide one, and a 5MP depth camera for portrait shots. Inside the teardrop-shaped notch is a massive 25MP selfie-camera that also features ‘Selfie Focus’. This one also features a 4,000mAh battery and 15W fast charging. The A2 Core, A10, A20, A30 and A50 are all on-shelf this week in South Africa while the A70 will be available at the end of April. The A80 will only arrive in June 2019. Below is a list of all the A-devices and their corresponding recommended retail prices: