In what seems to be a daily hardware update before next week’s major services announcement, Apple has announced an upgrade to its AirPods that will bring with it wireless charging support and better battery life.

Powered by the H1 chip which Apple designed and developed itself for its wireless ear-pods, the second-generation truly wireless buds promise longer talk time (Apple claims 50% more), better quality calls, and even quicker connections. You can now also use Siri directly from them by simply saying “Hey Siri”. 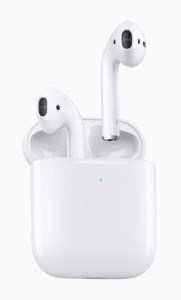 The standout feature might be the forthcoming cord-free charging, though. To get it, you’ll need to spring for the pricer and awkwardly-but-appropriately named ‘AirPods with Wireless Charging Case’ option, which is priced at $199 in the US, as opposed to the standard $159 AirPods that have to be charged via a Lightning port. South African prices haven’t been announced yet, nor has availability, but expect them to arrive soon.

When they first appeared, the original AirPods were mocked for their protruding ‘legs’. One South African technology journalist wearing them in the early days was once complimented on her ‘earrings’.

But the AirPods, like all Apple accessories, work exceptionally well. If you take them out of your ears, they pause the music or podcast you are listening to, and unlike most other earbuds, the AirPods have microphones in both left and right buds, instead of just the usual right one. If you use a Mac, they will pair just as easily with it as they do with other iOS devices. Our editor has also been using them with Android phones for the last six months without a hitch (aside from losing the ability to skip track by double-tapping the left AirPods, which only works with Apple devices and has to be set up in the menus).

The AirPod’s sound quality is also excellent, and calls are particularly good. The charging pod — so often cruelly compared to a dental floss case — has also always been a handy way to recharge them and remains one of the better-looking cases when compared to rivals’ offerings.

We can’t wait to pop a pair of the 2nd edition AirPods in our lugs.