It’s the near-future. Much of the world (the bits populated by Americans, for the purposes of this description) has been wiped out by biological agents. What humanity is left has cobbled together something like a society. All is not well, however. There are forces out there that wish to destroy, rather than rebuild. Happily Agents still roam the cities, members of The Division — a force dedicated to keeping order by the simple expedient of putting a bullet through most problems.

This description, covered in snow, could apply equally well to the first game in the series (The Division) but it’s The Division 2 we’re talking about here. Stuff had a chance to muck around in the squad-based shooter’s Private Beta over the weekend and this is the information we managed to salvage. Not a fan of long-form reading? The basic notes point to one thing: The Division 2 should be on your radar. While The Division was set in a snowy New York, The Division 2 opts for a slightly more open setting. It’s still a city, specifically Washington DC, along with all that entails. Shored-up barricades, broken glass and junked cars, makeshift fortifications and stuff lying everywhere. You know, a bit like home. But you’re not hemmed in on a single island, so there’s an illusion of more freedom, and the streets are somewhat wider and even longer compared to our frigid New York battleground.

There’s also a touch more variety than you’ll find in the concrete jungle. DC has a large number of alleyways and interior areas, many of which are used for missions, in addition to more varied terrain. Want a firefight in some close quarters? Sure, why not. Got a taste for something a little more open? You’re mad. Those are hell to defend but sure, let’s do that. And then there are the locations that need to be captured, depended, and supplied. There are small colonies around the world, checkpoints that can be taken from enemy factions, and a larger base (at the White House) for your upgrade needs.

And all of these locations are linked, in a way. Need a specialist for player upgrades? You’re going to have to help an outpost. And those outposts have Projects, which are used to improve the lot (and defences) of the folks trying to survive against enemy bastards. Even the smaller checkpoints have an upgrade mechanic of a sort. Keep them in supplies and they won’t have to forage as much, meaning that they’ll have greater numbers on hand to repel enemy attacks.

Men on a mission But that’s just the upgrade path. The mission structure of The Division 2 seems to be a varied one, with main story missions serving to advance the plot. If you played the first game, you’ll be familiar with these — take on a series of enemies or challenges, usually at a landmark or iconic location. Followed by a tough-as-nails boss encounter. But there are also secondary missions to target, which might be as simple as tracking down some SHD (Strategic Homeland Division or ‘Shade’) Tech, or as challenging as rescuing hostages, or liberating an outpost.

In fact, gameplay in general is challenging this time around. You’re no bullet sponge, out to save the world on your lonesome (though that is an option). Even with your technological advantage, you’re surprisingly squishy for someone wearing as much Kevlar as they can carry.

Sustained attack will see you shedding armour. Players have armour repair kits instead of health boosts, and a collection of upgradeable skills and perks. Skills available for the beta include a turret (which can operate in assault or sniper modes), a repair drone, or a seeker mine. All of this high-tech stuff gives you an edge in battle but not enough of one to just run and gun. Flanking, placement, and calling in backup are all essential parts of clearing missions in The Division 2. That backup? It could be AI-controlled patrols (an essential part of capturing outposts) but you can also call in human assistance. 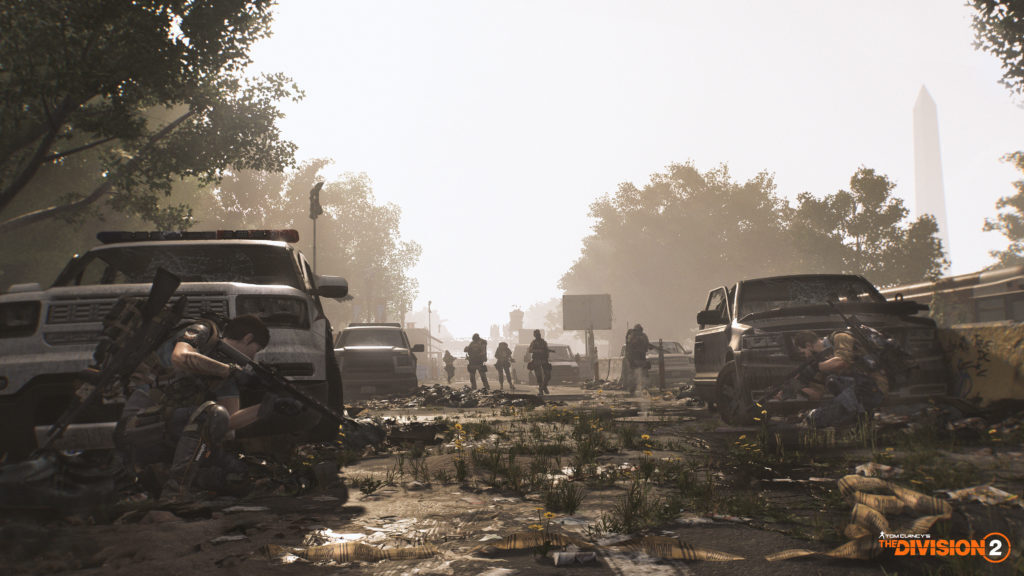 The big question for players is: Should you tackle the game alone? Yes and no. If you’re the type to solo, you’re looking at a heavy challenge that will see you transported to safe areas on death to try again. Not ideal, but the move makes sense. Respawning you out in the world removes a lot of the challenge. There are more intelligent checkpoints in main missions, meaning you won’t reset to start there, but out in the world? Git gud or go home.

Those wanting to squad up, can. Up to four players, taking on the challenges the world throws at you, is a recipe for tense combat or goofy fun. But there’s also a middle-ground, where usually solo players can hook up with or rescue randos in need. It is possible to call for assistance while facing an overwhelming force. Whether you’re answered is uncertain but you could find yourself with a human-controlled character coming to your rescue when pinned down by Hyenas (the first of several enemy factions) in the middle of a crossroads. It feels like Ubisoft would prefer you work with others to complete this one but their implementation — learned from Watch_Dogs — is a hybrid of single- and multi-player. The result? Solo fanatics may be more likely to call in (human) backup — just because doing so is a) optional and b) really, really well done.

The Division 2: A work in progress

We ran into a few of the server bugs that plagued some users of the Private Beta over the weekend, which cut short play time. That didn’t detract from what was a tight, well-planned experience running around Washington DC playing the hero. The Division 2, during its initial hours at least, has proved a detailed, varied shooter that doesn’t only rely on bullets and bangs to keep player attention. The world itself is a pleasure to explore, if one can use the word to describe one of humanity’s worst-case scenarios.

As far as excitement goes, we’re more keen on The Division 2 than we are on the similar-in-many-ways Far Cry: New Dawn. The crafting and base levelling mechanics, the overall attention to detail and the intricate story here help immensely. The surprisingly solid multi/single-player functions were also a highlight of our trip to DC. We’re looking forward yet again, to the mid-March launch date. We’ll see you in the Dark Zone.