We’ve got to spare a thought for LG. It’s had a tough few years in the smartphone market, with every flagship it’s released being overshadowed by either Samsung’s or (more recently) Huawei’s releases. And even when it’s done something novel, like introducing a wide-angle snapper with the G5, the execution has lacked sufficient polish to make it unmissable and rivals have simply matched it in short order.

When your opponents are as slick as LG’s are, you’ve really got to pull out the stops and offer something unique if you’re going to make consumers take notice. LG’s tried hard with the awkwardly named V40 ThinQ, but the results are a mixed bag. LG’s billing the V40 as the ‘ultimate content creation tool’ with a flagship-thrashing price of R12,500. We’re the first to admit the pricing is aggressive, but suggesting the V40 can match up to the likes of Huawei’s class-leading Mate 20 Pro, Apple’s latest iPhones, or Samsung’s soon-to-be-released S10 range isn’t just hyperbolic, it’s inaccurate.

Nonetheless, ignore the hype and the V40 offers a solid feature set for its mid-range price. It’s attempts to stand out mostly fall flat (more on that later), but if you’re looking for a flexible camera, a banging display and generous storage — and you don’t mind charging it often — the V40 is definitely worth a look.

There’s no denying the Stuff office is dominated by phones that err on the phablet side of the phone/phablet divide. With its 6.4in display, the V40 falls firmly into the latter category, and we like that about it. There’s the familiar rounded design we’ve come to expect from the V-series, but this time there’s a notch in the undeniably brilliant, bright and richly coloured OLED display. The bezels all-round are minimal, making the display look pretty close to edge-to-edge. The notch doesn’t intrude as much as, say, the iPhone XS’s, but then it’s not packed with as many sensors. Instead, the V40’s notch houses two camera sensors and a speaker.

Like we saw with the G6 ThinQ (the first LG smartphone to don a notch) the V40 includes options to dress up or disguise the notch if you don’t like it. Personally, we’re happy to live with the notch because adding a black or coloured strip to it takes away from the big, beautiful display. We love a good unibody design, and the V40 hits the mark hard. The ‘Moroccan Blue’ finish is glorious (the pics here don’t really do the colour justice), which is a good thing, as it’s the only colour option LG’s offering in South Africa. We’d prefer if the finish felt less like plastic and more like aluminium, though, and you’re going to want a case for this one immediately — it’s hellishly slippery.

Brace yourselves, ever more camera sensors are coming and it’s weird to think that the V40’s camera count will soon look pedestrian. LG will tell you the V40 ThinQ was the first phone to market with five cameras (two up front, three around the back). Unfortunately, while that may’ve been true when it launched abroad in the final quarter of last year, arriving in South Africa in February 2019 means that ship has long since sailed. So much for bragging rights, then.

The rear camera setup includes a standard lens with optical image stabilisation, a wide-angle lens, and a 2x telephoto lens for getting closer to the action or shooting those portrait shots (sharp subject, soft background) everyone seems to love. LG’s also loaded the camera with a bunch of lighting tools for portrait photos, which are very similar to the ones on the latest iPhones… and just as hit and miss. 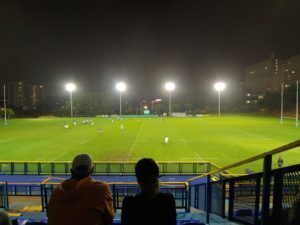 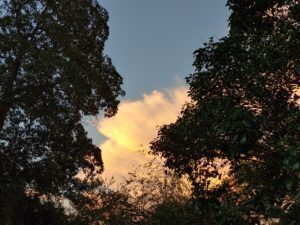 Nonetheless, overall the image quality from the V40 is excellent. Pictures are sharp and colours are vibrant and realistic, and the range of sensors on offer provides great flexibility. As is always the case, you can expect some softness and distortion in wide-angle shots, but the results are still better than those from recent G-series devices. The night mode (which does image stacking of the sort we’ve seen from Huawei devices to make night time images brighter and more detailed) works pretty well, too, and is something we expect to see on every big-name phone in 2019.

Now to the gimmicks. LG’s included something it calls ‘triple shot’ that takes three consecutive pictures (one with each lens) and then stitches them into a short video. We found this mode essentially useless when shooting a moving subject, and not much better when shooting a still one. First, we struggled to find a use case for it. Second, it never zoomed where we wanted it to. Third, the results were consistently lame — like the dramatic zoom on Instagram stories if it was slow and jumpy. 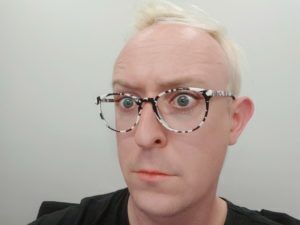 Then there’s the bizarre make-up overlays for selfies (which we’re calling ‘fake-up’) with names like ‘bling bling’, ‘seductive’, ‘grooming’ and office favourite, ‘sexy red’ that applies virtual eye-liner and crimson lipstick. We can imagine there’s a market for this sort of augmented reality narcissism, but we also know it’s already extremely well catered to by the likes of Instagram and Snapchat.

On the video front the V40 can shoot at up to an impressive 60fps at 4K resolution. However, as is often the case, we got better results sticking to 1080p. As you’d expect, there are also a range of novel video modes to play with, with names like ‘Cine Video’, ‘Flash Jump-Cut’, and ‘Cine Shot’. Cine Video gives you the ability to adjust video exposure whilst shooting, or highlight a part of the video to then zoom in on via an on-screen slider. The results are pretty tidy and we can imaging mobile videographers really appreciating it.

Flash Jump-Cut, meanwhile, should really be called ‘GIF maker’ as it takes a picture every three seconds and spits out — that’s right — a GIF. We’d like to be able to adjust the time between each shot is captured (three seconds feels slow and creatively limiting), but hey, allegedly we can’t have it all.

Cine Shot gives you the ability to shoot moving objects and place it within a static image. The rest of the world calls the result a cinegraph. The process isn’t flawless (the cutout-tool is very clunky), but it’s a load of fun to play with.

Let’s just start off this section by saying that the V40 has a headphone jack. Combine that with a USB-C port and we’re in connectivity heaven. Maybe we’re just old school, and maybe we just have heaps of plug-in headphones we still want to use. When it comes to annoying others with sound, the LG V40 includes the same ‘resonance chamber’ Boombox speaker we saw on the LG G7. Plonk the handset on a hard surface, and you’ll be able to blast tunes even louder. It’s a nifty feature and one that we really, really enjoy. Good work LG.

Another welcome feature is the addition of face unlock. It works seamlessly if it’s set up correctly. We set up the face unlock wearing prescription glasses and had to dive into the settings to find ‘improve face recognition’ for it to work without our glasses on. Even though we couldn’t find a front-facing sensor in the notch — which meant we assumed the cameras alone are used for face recognition — we couldn’t unlock the phone with a picture… so that’s reassuring. Perhaps LG’s using both front facing cameras for depth perception so it doesn’t fall for 2D representations. We’re not sure, but whatever it’s using it works. Then there’s the customary fingerprint sensor/lock button on the rear cover, suitably placed far enough from the cameras you won’t leave smudgy prints on them every time you reach for it.

The V40 currently runs Android 8.1.0 dressed up with the usual custom LG interface. An update to 9.0 should be coming soon, but it’s a pity not to have the latest version out of the box, especially when there’s no telling when LG will get around to it. Why do we want the latest version of Android? Primarily because it gives us access to some of Android’s ‘screen time monitoring’ capabilities to keep track of our mindless social media scrolling sessions.

Also, LG’s overlay remains annoying. If you want an app drawer you have to dig around in the settings, and even then it’s paginated rather than one long scrollable list. Overall, the visual style feels a little less coherent than that of other Android devices. With some work you can fix most of these problems, but we resent having to do said work. Performance-wise, the V40 does very well. A Snapdragon 845 and 6GB of RAM mean there’s plenty of lifting power for whatever you throw at it. Large video-files and demanding mobile games are handled with ease… but they do increase battery drain. And we love that there’s 128GB of storage as standard (LG does make a 64GB version, but as with the other colour variants we won’t be seeing it here).

LG’s opted for a 3300mAh battery, which is acceptable given the size of the V40’s display, but is much smaller than most rivals. The Galaxy Note 9 (which is roughly the same size) has a 4000mAh battery, and the mighty Huawei Mate 20 Pro packs in a 4200mAh one in a similarly slim device. Despite their hefty batteries both the Note 9 and Mate 20 Pro’s stamina fell off within a few months, so we dread to think what the V40’s going to be like in six month’s time. Real-world stamina of the V40 while it’s still brand new is… okay. If you refrain from doing anything too demanding you’ll get a full day from it, but spend too long shooting stills or video, watching video, listening to music while running maps, or playing games, and you’re going to need a charger fast. At least there’s support for fast charging and wireless charging (using the Qi standard), but it feels like a serious misstep that a phone billed as a tool for serious creatives penalises you with charging concerns if you use it as a serious tool. Given its sub-R13k price, the V40 is a worthy contender for those who want most flagship features without flagship pricing. The screen is brilliant, getting 128GB as standard is superb, and the creative flexibility from the camera setup is very welcome indeed.

If there were no other Android smartphones in the world the LG V40 ThinQ would be easy to recommend, but with so many strong contenders in the upper mid-range segment and new top-end devices due from Samsung and Huawei in coming weeks (both of which are expected to include ‘budget’ models) we suspect the V40’s not going to sell as well as its maker would like.

LG prices tend to drop quickly, though. So when the cost dips, the V40 might well become a far more compelling buy than it is today. We’re also very curious to see how LG prices the G8 given its attempts to undercut the competition here. If the G8 includes the best of the V40 in a smaller body with an even more diminutive price tag it could be extremely attractive indeed.

When your opponents are as slick as LG's are, you've really got to pull out the stops and offer something unique if you're going to make consumers take notice. LG's tried hard with the awkwardly named V40 ThinQ, but the results are a mixed bag.