We recently got a chance to go hands-on with Far Cry: New Dawn, the newest ‘in-between’ release dividing the numbered Far Cry games. After Far Cry 3 we got the neon Far Cry 3: Blood Dragon, after Far Cry 4 we got Far Cry Primal and after Far Cry 5 we have Far Cry: New Dawn. What’s strange about this one is that it’s a more-or-less direct sequel to Far Cry 5, rather than being an only tenuously-connected asset rebuild.

Taking place seventeen years after the so-called ‘good’ ending of Far Cry 5 [SPOILERS: The nuclear bombs actually go off and players wind up stuck inside a bunker with Joseph Seed] players find themselves back in Hope County. As someone else, naturally. Things are a little different, a little more broken than the last time we were here. There are fewer religious nutcases but there is far more of a Mad Max vibe, if Max had a thing for rave culture and motocross rather than V8 engines and gasoline. Things have changed in Hope County, though some parts seem to have stayed the same. The aftermath of Far Cry 5‘s conclusion has left the scenery uprooted and the population decimated but, as noted futurist Jeff Goldblum has stated, life, uh… finds a way. Society, of a sort, has sprung up again. It’s a far cry from democracy, though — more of an autonomous collective. But life in this junkyard paradise is upended by the arrival of the Highwaymen, a roving scavenger band lead by two typical series villains: The Twins, Mickey and Lou.

We didn’t get to see much of them in the couple of hours we had to demo the game but the occasions they turn up are marked with an almost casual violence. There’s also a whiff of madness about them, and there’s something about their personalities that screams ‘late-game twist’. Just what that might entail isn’t obvious yet but we’re looking forward to getting to grips with the main story. Especially since all of the side-mission stuff seems to be even more bonkers than usual. Some sections of the game will be familiar. In the topographical sense, at least, but there will be more than a handful of spots from Far Cry 5 that will mist up the all-seeing nostalgia eye in your head. But mostly it’s Hope County seemingly destroyed or overgrown, with branches, roots and vines taking over. As is the wildlife. Wildlife that will wind up chasing you through terrain that is returning to nature while you’re clashing with the Highwaymen or one of the other factions in the game.

But you won’t be alone. There are still Guns and Fangs for Hire, AI companions who will trip along with your solo outing in New Dawn. Or you can haul in a few friends for some co-op play, something Ubi’s eager to punt this time around. Sadly, we didn’t get to play any co-op specific stuff but this slightly mad open world seems made for online shenanigans.

Did we say slightly mad? That’s because the side-mission content strikes us as being closer to FC3: Blood Dragon levels of weird rather than FC Primal levels of serious. Many of your old friends from Far Cry 5 are still present (Hi Hurk!), often as Guns for Hire, but there are some strange missions to be had. A handwave to the fact that you can get intel from folks in yellow (there’s a reason for that, it involves a Business Plan™), why there’s a blind lady making weapons, or just a mission to make sure the kids get a good night’s rest… nothing is really normal here. 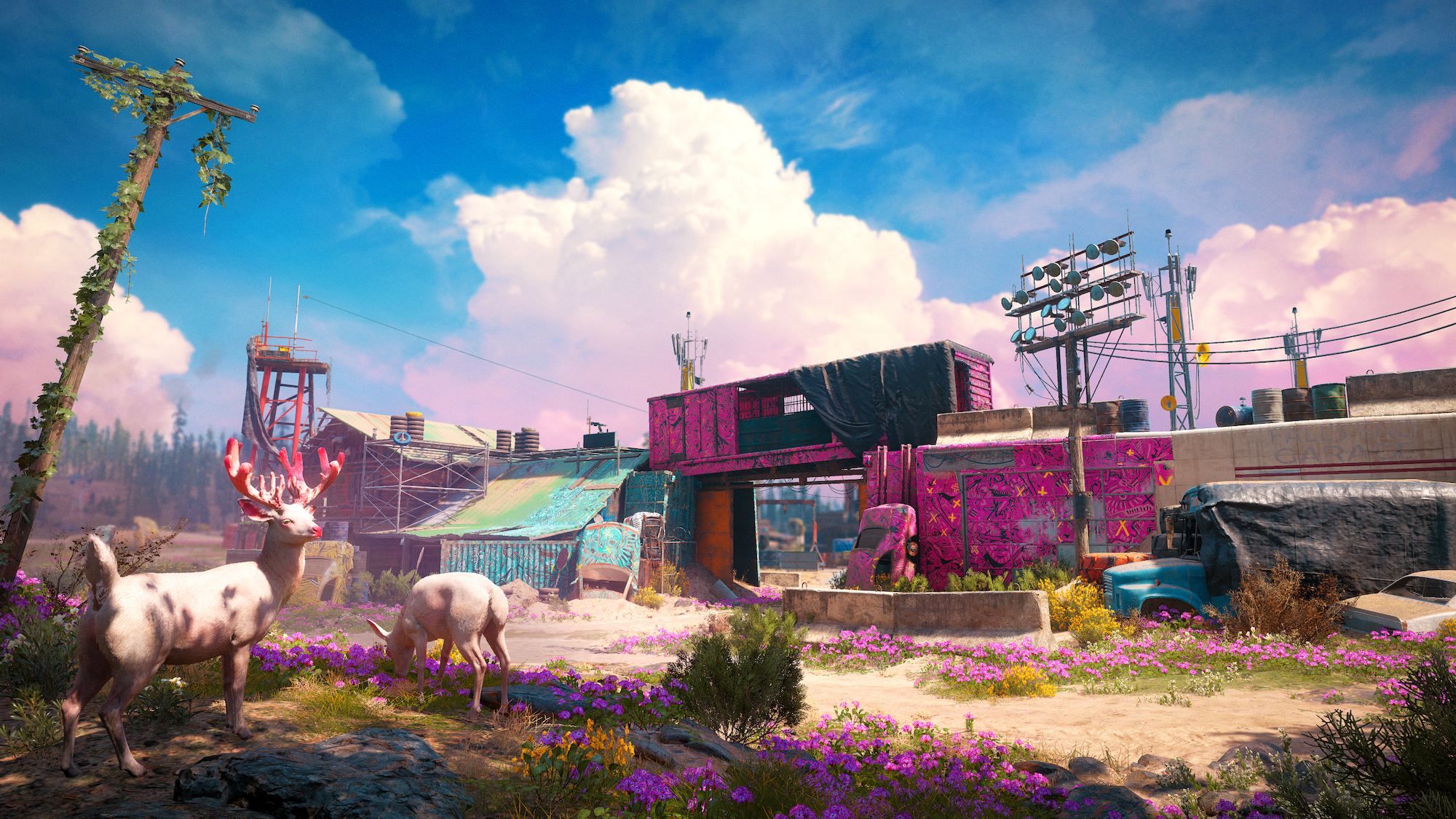 You know what else isn’t normal? The fact that you now have a base of operations. This is your little slice of heaven and it’s the area under threat by the Twins and their technicolour motocross minions. And it’s also where you’re going to have to do a spot of building. Ubisoft have moved some player upgrades into sections of the home base, meaning that you’re doing the post-apocalyptic scavenger thing.

There are bits out in the world you need, in old prepper stashes and gained by hunting animals, but the main thing you need is ethanol. Because vehicles and generators, you see. And you get that by capturing Outposts. Outposts can still be captured to form a fast-travel station, but they also form part of the new tiered enemy system.

Capture an Outpost and you get some resources. Squeeze it and you get a little more, but the Highwaymen take it back. Only they make improvements and send in stronger enemies, which you can defeat again for another resource boost. Squeeze again and the enemies and obstacles get even tougher, leaving you to capture the area again for even greater rewards. Which you’ll want because base upgrades are not cheap. Since base improvements translate into character upgrades, letting you secure health upgrades or craft better weapons, you’ll want to get those upgrades done.

Not all upgrades rely on the base of operations. Far Cry 5‘s Perk system returns, though it’s been streamlined for ease of us. You can still find Perk-adding magazines around the world and completing in-game challenges will give you the rest. Speaking of weapons, many of the old weapons from Far Cry 5 have made the jump over. After all, folks weren’t just going to let them rot for seventeen years. But those weapons haven’t been maintained at all, so they’re slow, clunky and rusty. And upgrades won’t really come cheap, so you’ll be wandering around with some sub-par weapons for a while. They’ll do for low-level scavengers but enemies and animal opponents do get tougher. This is represented in their appearance, as stronger enemies come stacked with heavier armour. And those early weapons won’t necessarily make a dent.

We’re not sure on the existence of many other new weapons but players have a saw-blade launcher at their disposal early on. This single-shot crossbow-like thing might seem like a silly choice in the apocalypse but fire it in a crowded room and see if it still seems limited. The blades ricochet, wiping out armoured and shielded enemies from behind or even above. Just the thing for economically cutting down enemy numbers.

How does more conventional weaponry perform at higher levels? Yeah, we didn’t have time for that but the intro shotgun is sufficiently weighty, the assault rifle is the one you want for open combat, and the handgun is great in a pinch. We were definitely keen on something with a bit more punch, though. Honestly, it’s too early and we haven’t spent enough time with the game to really say what New Dawn will be like. During reviews, that’s usually decided around Hour Twenty (unless something goes horribly wrong before that). If it continues as it starts, we should be in for a wild ride through some even wilder country. The game’s been built to make the most of four-player co-op as well, a feature we weren’t able to test in the preview code. There’s some serious story potential with the Twins, we can’t wait to get a little deeper into those RPG-lite, base-building elements to see how they all play out and we’d be lying if we said that the thought of hunting for Easter Eggs in Hope County (and beyond) wasn’t an attractive one. Mid-February can’t come fast enough for us.

Far Cry: New Dawn launches on 15 February. Look out for a full review on Stuff‘s website around that time.