Soon you’ll be able to #MuteRKelly without waiting for anyone else to intervene on your behalf. Okay, and mute any other artists you don’t want contaminating your musical sanctuary called Spotify.

Music streaming service Spotify is working on a feature that will enable users to block any artist. This will render that artist invisible on the streaming service, whether in the user’s personal library, playlists, automatically curated playlists, charts, radios, whatever.

According to a report by Thurrot, who has access to Spotify’s beta program on iOS, you won’t even be able to play the artist’s songs from their profile. The app will, however, still play songs that they are featured on. 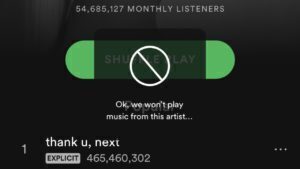 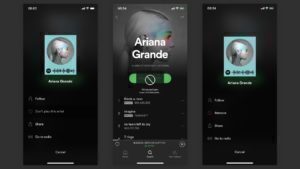 Apparently Spotify planned to start offering the blocking feature in 2017, but upon consideration decided that they’d rather not implement it at that stage. Seems like they’ve had a change of heart in light of recent controversies in the music sector.

Last year Spotify famously (and controversially) removed R Kelly from curated playlists, and it may be Kelly who’s at least in part to thank for the forthcoming feature. A new documentary that outlines the accusations against the artist over the last two and half decades, called Surviving R Kelly, has increased the calls for consumers to be given the ability to boycott individual’s work on platforms like Spotify.

The feature isn’t out in the wild yet, but hopefully it’ll arrive soon, even if only so we can make sure The Vengaboys never worm their way into our Discover Weekly or Release Radar playlists.