There are a few things that you cannot do without when gaming online — a decent internet connection, somewhere comfy to sit and a headset that you can use for hours on end without discomfort. The first one of these is non-negotiable, unless you’re okay with the sort of ping that sees opponents teleporting like Dragon Ball Z combatants after three weeks of powering up. Most homes have a comfy spot somewhere. If not, you’re doing it wrong. That just leaves the headset.

Which is a tough choice, especially if you have an unlimited budget. Want to drop between R3k and R10k on a gaming headset? Someone will sell you one. You’ll be spoiled for choice. It’s a lot harder to get a great headset when you’re on a strict budget but, we’ve got a very good sub-R1,000 option for you in the PDP Afterglow Lvl 3. Stuff has spent more than a few weeks with one (more on that later) and if you’re looking to get your chat on on the cheap, this is the way to go.

There’s only really one way to describe the PDP Lvl 3 headphones for PlayStation 4 (there’s an Xbox One version too, which just swaps out logos and the PlayStation blue for Xbox green) and that’s ‘plastic’. You’re not going to find much metal in these gaming headphones at all, but the construction manages to be both solid and lightweight. We’d hate to stomp on these, but we’d hate to do that to a smartphone or a kitten, too. As with most problems like this, try not to stomp on them. It’ll ruin the nice carbon fibre-lite thing they have going.

The deep, wide ear-cups consist of fabric-covered sponge with enough rigidity to let your ears live inside their own little space without getting all crowded and sweaty. Extended use hasn’t seen the foam collapse either. There is enough angular play on the ear-cups and flexibility in the headband that you can play with one ear exposed (you know who you are) or switch up the cans’ orientation on the side of your head. The headband is padded with segments of thinner (but still soft) sponge covered in a leather-ish material. This doesn’t matter to comfort much, unless you’re prone to sweating through the top of your head. And if this happens to you, the chicken dinner probably isn’t worth that sort of stress. Just a thought. In terms of features, you’re not going to find very much. The headphone’s functions are as bare-bones as the design. The 3.5mm headphone jack (for insertion into a PlayStation 4 controller or mobile device of your choice) sits at the bottom of a decent plastic-sheathed ribbon cable, while there’s a single in-line control closer to the headphones themselves. It’s only got two functions: control the volume and mute the mic. If you want anything more than that, you’re going to have to resign yourself to paying more than the R650 the Afterglow Lvl 3 will cost you. Want even more than that? You’ll need to have the budget to head on to the likes of Steelseries and Astro for your gaming-audio fix.

The boom mic is… adequate. It’s sensitive enough to pick up hadedas outside (for confusing international opponents and American musicians), it flips away and won’t just flop right back down again. Flipping it up won’t mute the mic, though — just bear that in mind. The in-line switch is the only option there. If we could have changed one thing about these headphones it would be the mic — a stiffer boom, one that would stay in place better when bent into position, would have been a nice-to-have. Sensitivity and sound reproduction — for the folks listening to you calling out enemy positions — are good enough that this isn’t a deal-breaker. 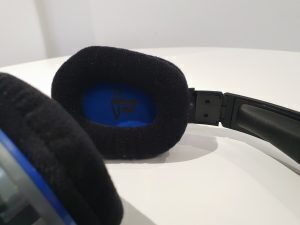 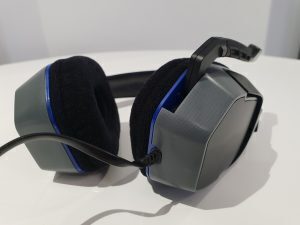 Which brings us to the most important aspect of a set of gaming headphones: The sound. You’d think that a R650 set of cans with basic voice functions would have average sound. You’d be incorrect. Pop these on, fire up a game with a lot of great ambient audio like Red Dead Redemption 2, Assassin’s Creed: Black Flag, or Grand Theft Auto 5 and you might just forget about using them for online communication. Sound is crisp and clear, letting you hear the sound of hooves on hardened mud, the birds in the air and Dutch van der Linde telling you that he has a plan. Again. There’s very little exterior intrusion, without jacking the audio so high that your eardrums fear for their inner-eared lives. They’re appreciably loud if you do take that route, taking a lot of volume before falling over into distortion.

Honestly, the audio quality is truly surprising at this price point. We’d get these just to listen to games, never mind talking to other people. Oh, wait, we did that. Totally bought a pair when the review set went back. That’s a course of action very few items that enter Stuff‘s offices inspire.

The only hiccup in terms of audio quality is balancing between game and chat. If you’re playing an online shooter, odds are that you’re not contending with much more than the odd sound effect and footsteps versus the complaints your team throw around. Play something like Diablo III online, though, and you’ve got to sort out SFX, in-game music, in-game voice, and then the frantic screaming as you port back to town and leave the newbie to take on a Torment 13 Elite mob on their own. Some trial and error is required to balance game settings with online chat, but it can be done. Once it is, you just kinda stop thinking about it and it becomes normal. Except you didn’t drop R4k on the setup. Any time that a review product goes back to its source and we head out and get a replacement immediately that product has done something right. We’ve used headphones costing several thousand rand (and still do) but this R650 (give or take R50, depending on sale pricing) gaming headset ticks almost every box.

As long as you’re not abusing them, the PDP Lvl 3 will last several years. Step on them and you risk snapping the headband but the same thing applies to that Astro A50 headset you spent PlayStation 4 console-level money on. The Lvl 3 is comfortable enough for extended use (though it can go hard on glasses-wearers after an hour or two) and the sound is fantastic.

There’s no active cancelling, but the cushions do a decent job of blocking out surrounding noise — to the point that you’re going to want to keep your phone in sight if you’re expecting a call. The only real complaint isn’t really a complaint at all — a bit more control over the mic boom’s position would have been appreciated. At this price, though? The PDP Afterglow Lvl 3 gaming headset is a must-have.