From drawing cash, to swipe, insert chip, and now tap-to-pay mechanisms — transacting in stores has evolved with the needs of humans. Now physical, plastic cards might become obsolete thanks to digital channels like Samsung Pay.

Samsung Pay is the company’s digital payment platform, and aims to replace the wallet completely. How? By loading bank cards, as well as loyalty cards, into the Samsung Pay app and using a Samsung smartphone to pay for items. When someone taps a bank card (or their Samsung device), it uses near-field communication (NFC) to ‘talk’ to the point-of-sale terminal, or contactless card machine. The problem is that NFC is available in less than 50% of retail spaces in South Africa. You can see the issue here.

Samsung Pay has found a loophole, and can make use of the magnetic secure transmission (MST) sensor on the terminal instead of NFC when it’s not available. The MST is the swipey part of the terminal that is used to ‘swipe’ bank cards.

South African retailers are still busy adopting contactless terminals across the country, and many banks are pushing for complete roll-out of this technology. But if you’re amped to drop the old-school wallet-toting system before roll-out is complete, you can move to Samsung Pay. You’ll still be able to make payments at just about any retailer. Even the spaza shop, thanks to Samsung’s ability to emulate MST on a device.

Loyalty cards can be loaded easily, either manually or by scanning a barcode. The scanning feature only works with certain loyalty cards, but any card can be created and added to the list. After a viral video was shared online, many have questioned the security of tap-to-pay transactions. In the video, a man brings an NFC-capable payment terminal just close enough to a customer’s pocket to enable the proximity payment.

This has stirred up many South Africans who distrust the tap-to-pay mechanism implemented by many local banks — although users can set the card to require a PIN, or set a limit on the amount spent via a simple tap.

Samsung says that their system is very secure — using their own Knox security system and tokenisation. When a card is loaded onto the Samsung Pay system, the card is given a digital ‘token’ that differs from the number on the card. With each transaction, the card number is tokenised to keep the real card info secure. With this method, cards cannot be cloned, and no information belonging to the owner is at risk.

Making a payment is also more secure than conventional tap-to-pay mechanisms because of security built into the app. To access Samsung Pay, users must authenticate using biometrics (like a fingerprint-scan, facial recognition or a retina scan), as well as a PIN number. Samsung has also added ‘Intelligent Scan’ as a new authentication method. This is essentially a more advanced facial recognition system.

NFC or MST transactions create a cryptographic representation of the card, and it changes every time it’s used. It might be possible to get more secure than that but you probably won’t need it to be. 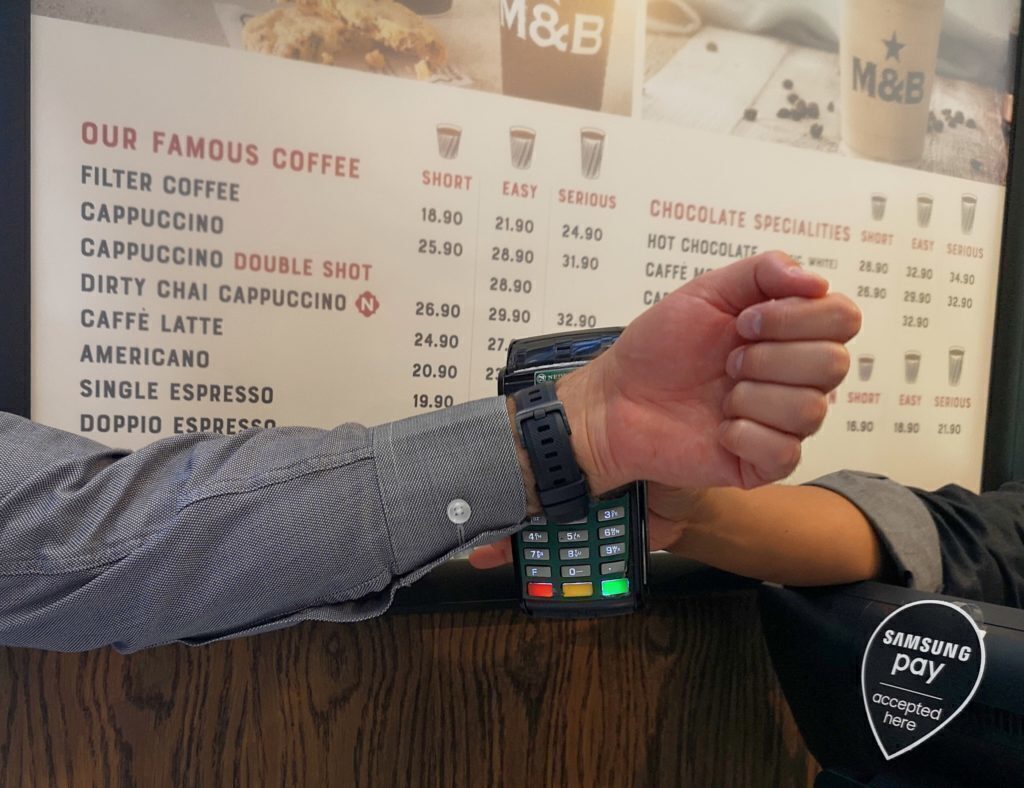 The Samsung Pay app for wearables will be available ‘very shortly’ according to Samsung South Africa — which likely means we’ll see an official launch in 2019.

Wearables compatible with Samsung Pay are: the Galaxy Watch, Gear S3, and the Gear Sport, but they’ll only support NFC payments. And as with Fitbit Pay, you’ll have to re-enter a PIN after the device has been removed if you want to use the Pay feature again.

We may also soon withdraw cash with Samsung Pay. The company has rolled out ATM transactions in five markets already, including Korea. With this functionality, users can execute a few prompts in-app before they arrive at an ATM, after which they just tap the phone to the machine and money is withdrawn. Easy as that. In other news, Samsung has rolled out a new user interface for the Samsung Pay app, and it is called UX4. It’s the first app update since it launched in South Africa, and includes some basic changes that makes certain features more accessible.

Samsung Pay is available on the Galaxy S8 and S8+, the Note 8, as well as the newer A-series phones (A8, A7 and A5). It’s limited to certain devices because the service needs certain hardware to process MST transactions. It’s also only available with certain local banks at this stage, but Samsung will partner with five more banks in 2019. You can download Samsung Pay from the Google Play store.