We’ve seen a few solutions to making motion more real in virtual reality. Prime among these is the Virtuix Omni, a Kickstarted project that costs large amounts of money (if you’re from South Africa — and from other countries too). Google’s now got a patent for a slightly smaller solution to the ‘what to do with your legs’ problem in VR — a pair of virtual reality sneakers.

By which we mean actual sneakers that perform a function in virtual reality, rather than a pair of kicks that only exist in VR. That would just be silly (and that day is definitely coming for your in-VR avatar at some point). 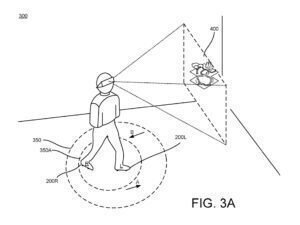 Google’s newest patent describes “…motorized footwear in physical space [that]may be tracked, and movement of the footwear may be translated into corresponding movement in a virtual environment.” Translation: The shoes have little wheels, motors and internal bits that allow you to walk naturally while remaining in one place — or at least you’ll be moved back to a central area when you wander off. The movement you make is converted into in-game or in-VR movement, while ensuring you don’t slam into your lounge wall.

That’s the theory, anyway. As with every other patent filing, it’s only valid once we see a working version of it out there. It is interesting to see how Google is considering tacking the issue of natural locomotion in virtual space, though. Google’s actually included some possible mechanical solutions here too, rather than the pure abstract ideas we see in some tech patents. If Google could solve this one — the biggest issue would be users safely retaining balance while these sneakers reset their position — proper in-home VR experiences would be one step closer.