German car maker Mercedes-Benz is the latest to throw its hat in the South African all-electric vehicle ring. Well, it hasn’t actually flung, but it’s shown us the hat, and confirmed its intentions to fling. In addition to bolstering its hybrid offerings, the company plans to begin selling its luxury compact all-electric SUV, the EQC, locally in mid-2019. It also plans to offer 10 all-electric vehicles globally by 2022 in all major categories, from compact hatchbacks to luxury sedans.

The forthcoming EQC is powered by an 80kWh lithium-ion battery and is built on the GLC platform. Buyers can expect around 450km to a charge, and all of the comfort and safety features they’d expect from any other Merc. While Mercedes says it believes 600km to a charge is the sweet spot to get drivers of combustion engines to consider switching to electric, it says the EQC will support rapid charging that’ll take it from 10% to 80% charge in around 40 minutes. Before South Africans are able to buy Mercedes-Benz EVs they’re going to see hybrids in the local market, including the GLC 350e, S560e and the diesel hybrid C300de. The company has also invested R100 million in its hybrid manufacturing capabilities at its East London manufacturing plant, which will build all right-hand drive hybrid models for the global market.

Mercedes-Benz announced its electric plans at an event in the shadow of the Zeitz Mocca art gallery in Cape Town where it also showed off its concept EQA vehicle. While the car on display was a show car, the company says it envisions a production model offering a range of at least 250km to a charge, and adds that the A-class segment is its fastest growing, hence the appeal of making an EV for it. An EQS is also expected to be unveiled next year, but it’s unclear whether or not this will make its way to SA. 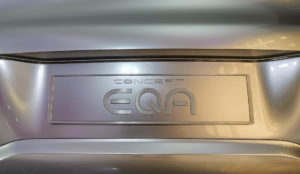 At the same event Mercedes-Benz unveiled an art installation by Es Devlin it sponsored called Zoetrope that’ll be open to the public until late next year.

The price of progress

Price aside, for many would-be EV owners the greatest concern is the lack of local charging infrastructure. Mercedes-Benz says its working with government, local agencies and even other manufacturers to ensure there’s an efficient rollout of infrastructure to support the cars it produces. With a year to do so before its first EVs arrive in the local market, and competitors like Jaguar undertaking rapid rollouts of charging stations, we’re expecting to hear more about manufacturers collaborating in the months to come. Of course, the other worry with EVs is price. Both the Nissan Leaf and BMW i3 hover around the R500 000 mark, putting them out of the reach of most consumers. Meanwhile, in a fine moment of hold-my-beerery, Jaguar has announced its five-seater I-Pace that goes on sale in SA early next year will start at a jaw-dropping R1.7 million.

Asked about pricing for the EQC, Mercedes says only that as it will be “The Merc of electric vehicles,” the “pricing strategy will follow this”. In other words… if you have to ask about price an electric Mercedes isn’t for you.