Are you a Discovery Vitality member? Do you have medical aid or insurance through Discovery, or one of its credit cards? Do you like gamification? Have you had enough of these questions? If you answered yes to any of these questions (except, perhaps, the last one), Discovery is hoping it’ll be able to sign you up to Discovery Bank when it launches to the public in March 2019.

Billed as a ‘behavioural bank’ by the medical aid giant, its forthcoming bank uses many of the same incentive mechanisms as its Vitality scheme… except now the product isn’t medical or car insurance, it’s banking. Behave well and your interest rates on savings go up, while the cost to borrow money goes down.

Discovery says this behavioural model for personal finance represents a “third way” in the banking sector, with the staid, legacy structures of traditional banks forming the one, and the Wild West-style approach of fintech companies forming the other.

So, what does the model actually look like? Discovery says its research shows that there are five behaviours that lead to the majority of peoples’ financial woes. these are spending more than they earn, not having insurance, not saving for emergencies, not saving for retirement, and poorly managing secured debt.

These five behaviours in turn lead to three outcomes: unsustainable debt, an inability to manage unplanned expenses, and not being financial sound when retirement time rolls around. Discovery Bank aims to encourage people to avoid the five troublesome behaviours by creating a Vitality Money Score based on how they handle their money. And of course there are incentives to be had, most of them from existing Discovery rewards partners like BA, Kulula, Woolworths, Pick n Pay and the like.

Signing up to Discovery Bank will be done via the app, as will most administrative tasks like altering withdrawal limits, managing family accounts and so on. Once you’re signed up, Discovery will work out your Vitality Money Status (blue being the lowest, diamond being the highest). Your interest rates for savings and loans will be based on this status, and you’ll be encouraged to make changes to your financial behaviour to help you move up the levels. Discovery’s also packing in some personal financial management tools, like a spend manager, a savings goal tracker, and a retirement planner. 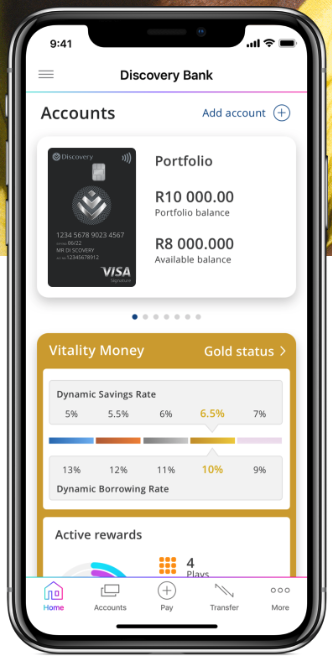 Interestingly, Discovery says its research shows a strong correlation between health behaviour and default risk, which is part of the reason its opted for the Vitality model for its bank. Many of the same rewards offered to Vitality members will be offered to bank customers, albeit with more drastic potential savings. For example, while top-tier Vitality members enjoy up to 35% off on flights from select partners, Vitality Money users will be able to get up discounts up to 75% (though as with most tiered incentive programmes, we expect achieving diamond status will be at least as difficult as consistently realising level five on FNB’s eBucks).

In addition to letting users actually cash out rewards earned rather than having to spend them with partners, Discovery Bank is building airport lounges for its customers. It’s also partnering with iStore to offer iPhones to bank clients using a similar mechanism to Vitality’s subsidised Apple Watches. Meet your targets and you pay nothing for the iPhone. Miss them and you pay a portion of the monthly fee (divided over 24 months) on a sliding scale that varies depending how many targets you hit.

Discovery won’t say how much its banking packages will cost, but says there’ll be two key products. The first, called Discovery 1, will be a pay-as-you transact account that’ll support Samsung, Fitbit and Garmin Pay, and includes a Vitality Savings account. This savings account is where your dynamic interest rate on savings is applied, and where the rewards you opt to turn into cash land up.

The second — and fancier — product is called Discovery 1 Plus (no points for the naming convention). It offers bundled fees, a separate credit and transactional account linked to one card, and the maximum rewards.

Discovery Bank will offer four hues of card: gold, platinum, black and purple. The last of these will be “by invitation only”, and we hope will only appeal to the sorts of people who’ll want to explain to others that a purple card can only be had by invitation.

In a novel but similarly cosmetic move, each card design is vertical rather than horizontal, mirroring the fact that most of us now insert chip and PIN cards vertically into point-of-sale machines, rather than swiping the magnetic stripe as in days of yore (or, you know, the modern day United States).

Incentives aside, we think the most innovative feature of having a Discovery Bank account is the option to do real-time (or near enough) electronic funds transfers (EFTs). While most banks charge R35 to R40 for payments to other banks to clear immediately, Discovery 1 customers will pay R5 for the privilege, while 1 Plus customers will get the option for free (having already paid for it with the as-yet-undisclosed bundle fee they’ll pay each month).

Discovery is also promising person-to-person payments that will be as easy as looking up their contact details on your smartphone and sending them money. It looks to be a mobile wallet solution of the sorts most of the incumbent banks offer. And if you’re a Discovery Medical Aid customer with an annual spending allowance and not just a hospital plan, you may be spared the alleged indignity of having to carry your cage of prescription meds to the till as a reconciliation and payment will happen at the dispensary counter.

Discovery Bank is now in beta testing and will have a commercial launch in March 2019. All existing Discovery Card clients — there are around 300,000 of them — will be encouraged to upgrade to Discovery Bank. And if you’re a black customer, your savings will also make you a shareholder because 10% of the bank’s total shares have been earmarked for black customers.

Signing up from the app will require you to take a selfie, which is then cross referenced with the Department of Home Affairs’ database (and which includes instructions to move to ensure you’re not using a 2D image of someone else), but if you have an existing Discovery product you can use the same login details for the bank.

Discovery says it’s working to make it as easy as possible for consumers to move over to it from other banks, and that it’ll be offering “strong incentives” to consumers to move their salaries and other deposits to it. As the bank has no ATMs of its own, its customers will be able to use any ATM to withdraw cash. And while it’s trying to avoid branches at all costs, it will have a physical outlet in its 1 Discovery Place office in Sandton.

We’re reserving judgment until we actually get a chance to try Discovery Bank/Vitality Money for ourselves, but we’re thrilled that the banking space is heating up. Between Discovery, Tyme Bank and the soon-to-launch Bank Zero, the next year in the banking sector is going to be nothing if not (forgive us)… interesting. If you’re keen to try Discovery Bank when it launches to plebs like us you can sign up over here.