Assassin’s Creed has been around for eleven years now and Ubisoft are, technically, still telling the same story. They’re just finding different ways of doing it. From Assassin’s Creed in 2007 to Assassin’s Creed III in 2012 the company used Subject 17, Desmond Miles, to link their historical assassination epics together, moving over to unnamed present-day protagonists (including the actual player, in the case of Assassin’s Creed: Liberation and even Unity, to a certain extent) before deciding on Layla Hassan for last year’s Assassin’s Creed Origins. Layla returns in Assassin’s Creed Odyssey, which continues the story of an ancient war between the Assassin brotherhood and the Templars. But that’s just what happens in the present day. In terms of the majority of gameplay, players are taking on the role of either Alexios or Kassandra of Sparta — descendants of King Leonidas, famed for defending free Greece (as it existed then, as a collection of distinct nations) from Persian conquest at the Battle of Thermopylae. Incidentally, Odyssey‘s tutorial takes place during this battle, letting players control the grizzled king and he puts boot to chest and spear through face for his country before being… well, killed.

What year is it?

Long-time fans might be a little confused by the timeline Ubisoft has chosen. Origins, with Bayek, Aya, and Senu, already told the story of the founding of the Assassin order so how does going back in time to the Peloponnesian War (around 400BCE) make any sense? That’s a question we asked at the start of the review as well but it does make sense — after around 30 hours of gameplay and a whole lot of exploring gorgeously rendered ancient Greece, rubbing shoulders with philosophers, warriors, pirates, oracles, and a selection of very angry animals.

How it makes sense is a question we’re not going to answer but there’s a hint we’re willing to give — you’re going to learn more about the Precursors or First Civilisation in Odyssey than you might have encountered in the previous games. Remember those symbols revealed at the close of the first Assassin’s Creed, scribed on an Abstergo cell wall and seen in just about every game since? You’ll get a little more information about what it all means. If you’re up for it. 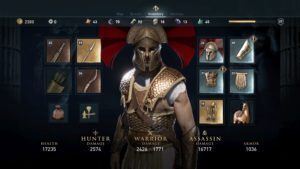 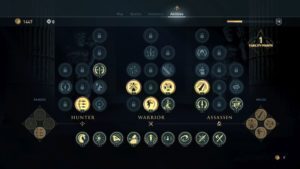 But you can disregard the meta-story that has spanned more than ten games and the minutia of the Precursors with Assassin’s Creed Odyssey. The First Civilisation sections come across as pretty optional, though they do make for interesting late-game meandering. Those present-day linking interludes are fairly limited, letting you just get on with being either protagonist Alexios or Kassandra and taking on Ubisoft’s first proper RPG as a wandering misthios (mercenary) in ancient Greece.

A lot has changed, gameplay-wise, though you might have seen the changes coming if you’ve been paying attention over the past few years. The inventory system returns from Origins, though it has been beefed up so you can equip gear to more slots and there’s the option to augment play styles using weapon and armour states. The skill tree is also back but it’s been streamlined — a lot of baseline abilities are automatically unlocked as you level up, with mostly active combat skills and passive enhancements available for players to spend skill points on. These can be respecced at any time, provided you have the drachmae for it. It’s great if you want to switch from a head-on Warrior type to a sneaky Assassin or a ranged Hunter. There are dialogue options, a first for the series, and romance options of a sort — they’re really not complicated at all. There are no Bioware-scale relationship mechanics too. Still, they’re there if you want Alexios or Kassandra to get it on while they’re getting on with it.

But narrative player choices do have weight, at times in unexpected and even upsetting ways. Sentiment might be the way to go but it could also lead to disaster, if you’re thinking with your heart too much instead of your head. The correct course is often only visible in hindsight. Those choices do seem to have a proper influence on the game, sometimes dropping available quests from your active list because you’ve just made a decision that negates them. Perhaps you just defeated an invading army (that you haven’t finished being a mercenary for yet). Maybe a mission you’ve completed wound up getting a quest-giving NPC killed. There’s impact as a result of your actions — sometimes immediate, sometimes delayed. Okay, often delayed, which leads to some interesting player-NPC interactions. Your weapon and armour choices can also dictate how you play. If you’re chasing after Legendary armour sets, those usually favour one type of play style over another. In addition to looking mighty fine, that is. The first one you’ll complete is designed for stealth, meaning you’ll deal more Assassin damage when sneaking or when using poison, but others will suit tanking as a Warrior or being a scared little Hunter.

Smart choices, and smarter upgrades by way of Engravings (which confer new abilities on gear) at Blacksmiths can make you a more effective misthios. And Odyssey is really about survival at the end of the day — you’re a mercenary, no matter what you happen to be doing, and that means you’re after money and not dying. Probably in that order. Combat has been simplified into a basic set of commands. There are unlockable special skills that use Adrenaline gained through combat — think the Sparta Kick or the ability to heal mid-fight. You can attack and heavy attack (the latter can be charged), use a ranged weapon in and out of close combat, dodge and parry. Those core abilities remain unchanged and differences in how you handle foes depend on what you’ve equipped.

Hold a spear and you’ll keep your distance, opt for a sword or dagger and you’re sacrificing range for speed. Wield a heavy weapon and you’ll get a bit of range and a lot of damage at the expense of some agility. The upgradable Spear of Leonidas (itself a First Civilisation artefact) is your stealth tool and comes into play during some combat finishers. You’ll want to upgrade this fairly quickly, since some skills are locked down till you’ve put in the work here.

The Power of Three

Odyssey locks some missions down until you’ve reached a specific level and often travelling to a new area means hitting a few side-quests before you can tackle your main objective. There’s… loads to do, but if you’re hoping to just crush through the main story in a hurry you’re going to be frustrated. If you’re terminally distracted, like we are, then the level requirements are not going to be an issue — we were behind on mission requirements for about the first seven hours before blowing by them and never looking back. Happily, you can’t over-level. Enemies in older missions will scale with your improvement, meaning they’re never too easy to overcome.

That said, Ubisoft has gone for a very predictable mission structure here. Travel to new area, find a new main point of contact, and receive three sub-missions before you can tackle whatever brought you there in the first place — rinse, repeat. That main-mission-triple-side-mission arrangement sticks around for the whole game and can get a touch annoying. Ubisoft have done what they can to mix things up, though. You’ll never really repeat a set of mission types and sometimes you won’t have to complete all of the missions in order to progress. If there’s a story element involved, you’ll want to finish them all anyway. The narrative aspect is among the best Assassin’s Creed has managed to date.

A Pirate’s Life For Me

A brief word about naval combat. The Mediterranean is your playground, where you can take on missions — usually involving sinking ships — or just be a Greek pirate in a ship crewed by recruitable characters. Combat plays a lot like Assassin’s Creed IV: Black Flag except you’re swapping cannon and shot for arrows and javelins. Oh, and you can drift your boat and hard-turn, because you’ve got rowers to do the work that sails won’t. Your ship, and others, are pretty flammable, making hit-and-run play a must but at the end of the day you still deal damage, board enemies, and then loot them for all they’re worth. There’s also a Mercenary ranking system in place, which draws its inspiration from a certain Middle Earth-themed game and is a fine source of new crew members. Odyssey will let you recruit anyone you don’t kill in combat (provided you don’t have to explicitly kill them for a mission) but your best bet for better Lieutenants are mercenaries. Killed people in town? Set fire to infrastructure? Someone will put out a contract on you and send a misthios after your pyromaniac behind. If you defeat them and don’t kill them, you can recruit them as sailors, improving your ship’s stats and adding special abilities in combat. Either way, killing mercenaries stronger than you moves you up the Mercenaries ladder — which unlocks perks like cheaper ship upgrades and better prices at Blacksmiths.

If you’ve been along for the Assassin’s Creed ride since the beginning, you probably don’t need much convincing to take a trip to ancient Greece. If you’re on the fence but were a fan of Assassin’s Creed: Origins then you should also pick this one up without thinking. In fact there are only really two drawbacks to this game — the time investment required to bring your Odyssey to a close and the repetitive mission structure. The mission setup might be rigid but Ubisoft has gone out of its way to make even those experiences seem as varied as possible. Of course, the great story in between missions on this massive misthios playground helps. Most of you will want to see how it all ends, but if you don’t have between 30 and 70 hours (depending on how distracted you get) handy, you’re not ever going to make it metaphorically home so you can slay your metaphorical wife’s metaphorical suitors in single combat. Metaphorically speaking. #KingOfIthaca