How can Huawei top the brilliant P20 Pro? By bringing in a new Mate, it seems.

It’s too early to know for sure, but the freshly revealed Huawei Mate 20 Pro looks to be leaps and bounds better than last year’s great — but now somewhat dated-looking — Mate 10 Pro. It’s also packing a dazzling new design along with loads of top-end tech and unique features.

Of course, the P20 Pro is merely an infant in the smartphone space and remains our #1 smartphone in the world as of writing, with its innovative triple-camera setup taking the smartphone game by storm. The Mate 20 Pro looks impressive, but can it topple Huawei’s own current leader?

Here’s what we expect, now that we’ve gone hands-on with the Mate 20 Pro. Both of these phones are fitted with a notch atop the screen, and both offer a dazzling Twilight gradient colour option on the back. But with the Mate 20 Pro, it does look like Huawei learned some lessons from the already-beautiful P20 Pro.

Most noticeably, the Mate 20 Pro doesn’t have that huge “chin” at the bottom, thanks to shedding the traditional fingerprint sensor – it’s actually integrated in the display now, which is a trend we’ll be seeing a lot more of soon. That will surely help make for a more immersive screen experience, plus the curved glass sides are an alluring touch. It still has a little more chin than an iPhone XS, for example, but it’s pretty slim.

On the back, the P20 Pro has the benefit of keeping its camera sensors along the side to provide more real estate for those great gradient colour options, but the Mate 20 Pro’s centralised square-pattern nub definitely has a unique new approach, too. Our early impression is that having the cameras centred is the better option, though we do keep trying to unlock the Mate 20 Pro by pressing our finger to the cameras… we’ll get used to that though.

The blue and green colour versions of the Mate 20 Pro have “hyper-optical” textured grip option… but sadly you won’t be getting your paws on those, as we’re only seeing the Twilight and Black versions in South Africa. Granted, the notch on the Mate 20 Pro is much wider – but that’s because of the new camera tricks and sensors held within. We don’t suspect it’ll be an issue; the notch looks comparable to that of Apple’s iPhone X/XS models, and we got used to those in a hurry.

Camera: The best gets better? 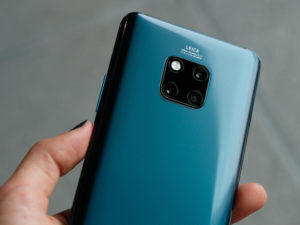 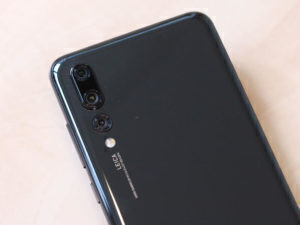 The P20 Pro’s camera setup is what sets it apart from the rest of the flagship class, elevating it to the top of the pile. And the Mate 20 Pro might top it.

The Mate 20 Pro keeps the 40-megapixel wide-angle and 8MP telephoto lenses from before, but trades out the P20 Pro’s monochrome lens for a 20MP ultra wide-angle camera. That should make super-wide shots even better, and yes, the software can still handle black-and-white shots without a dedicated snapper for it.

Of course, you’ll still get the same kind of brilliant perks as before, such as the 3x optical zoom and 5x hybrid zoom, along with loads of detail in shots. There are also the usual Night, Portrait and Light Painting modes. But the ultra wide-angle replacement should bring some nice bonuses that elevate the Mate 20 Pro over the P20 Pro.

On the front, the iPhone X-like camera setup has proper facial scanning via a dot projector and flood illuminator, which means the facial security feature will be a lot more precise and secure than that of the P20 Pro. It even has Animoji-like 3D Live Qmoji. And the 24MP should be enough for most selfie fans.

No doubt about it: the Mate 20 Pro packs more speed. It uses Huawei’s brand new Kirin 980 chip, which uses the new 7nm production process, has a pair of neural processing units (NPUs), and is big on AI capabilities.

The Kirin 970 in the P20 Pro is obviously plenty speedy, but it’s a year old at this point – and has been surpassed by all of the flagship competition. If the Kirin 980 lives up to Huawei’s boasts, it should be very close to Apple’s new A12 Bionic chip, or potentially even faster. The Mate 20 Pro packs in a massive 4,200mAh battery pack, which is a smidge larger than the 4,000mAh cell in the P20 Pro… although the larger, higher-resolution screen will most likely suck up all of that additional power.

Both should keep you up and running well into a second day or usage, or at least keep you going until evening on day one if you’re pushing hard with games and media usage. And the Mate 20 Pro also packs in wireless charging, which is missing on the P20 Pro.

It’ll even charge other wireless-charge capable phones that are stacked on the back, which is… a very niche addition. A friendly one, though.

And while the P20 Pro offers no option for expandable storage beyond the 128GB found within, the Mate 20 Pro introduces Huawei’s new Nano Memory cards to supplement the 128GB onboard. Granted, a proprietary format is likely to cost more than a standard microSD card, as you’ll find used in many other phones… but it is smaller than microSD. So there’s that.

The Mate 20 Pro also now lets you wirelessly project a PC-like experience onto a compatible external monitor, rather than just using a USB-to-HDMI cable. That’s nice, if you get the chance to use it. We thought the Huawei P20 Pro was packed with perks, but the Mate 20 Pro seems to take it to a whole ‘nother level.

Of course, those upgrades aren’t free. The Mate 20 Pro’s local pricing isn’t currently available, but they are priced around $100 more than the P20 Pro internationally.

Based on what we’ve seen and experienced so far, that seems like money well spent for what you’re getting, although given that you can find the P20 Pro for a fair bit less than full price these days, you might want to compare the feature sets between the two and see if it’s worth the extra dosh.