Huawei unveiled three new handsets and a watch at its global launch event in London today. The star of the show is the Mate 20 Pro. It’s flanked by the regular Mate 20 and the gaming-focused Mate 20X. Finally, there’s the new Huawei Watch GT, the details of which leaked a few days ago. Out of the handsets, we’re only getting the Mate 20 Pro in South Africa, so that’s what we’re going to focus on… but don’t worry, there’s plenty to say about it.

If you’ve been itching for an upgrade, know you’re a flag-bearing member of team Huawei, and want that triple-rear camera setup on an Android Pie-powered smartphone that packs a massive battery (that can serve as a wireless charger), you’ll be pleased to hear pre-orders for the Mate 20 Pro open in South Africa on 24 October, with the devices shipping a week later. Pre-order the Mate 20 Pro and you’ll also get the new Huawei Watch GT as part of the deal. How much, you ask? We’re not sure yet, but we’ll update this story as soon as we have the details. [UPDATE: Huawei South Africa has confirmed the Watch GT will retail for R5,500]. Good, now that’s out of the way, let’s get down to both the nitty and the gritty.

Three to get ready

The three rear cameras of the P20 Pro made it one of our favourite smartphones of the year, and our favourite for mobile photography. The triple setup is back, but this time the cameras (along with a flash) are clustered in a square in the centre of the Mate 20 Pro’s rear cover.

Also, Huawei’s made some changes to the cameras themselves. For the Mate 20 Pro they’ve gone with an ultra-wide angle lens-and-sensor setup, a regular wide angle one, and a telephoto. Like the P20 Pro, the Mate 20 Pro’s telephoto camera is good for 3x optical zoom and 5x ‘hybrid zoom’ (which uses software and image stacking to get closer to the action). That’d be enough to have us flinging cash Huawei’s way, but there’s also a new ‘Super Macro’ mode that enables the Mate 20 Pro to focus as close as 2.5cm from a subject (Huawei’s eager to point out the minimum focusing distance of the Apple XS Max and Samsung Galaxy Note 9 are around 8cm).

You don’t need to be eagle-eyed to notice from the images of the Mate 20 Pro that it’s got a hefty notch. An Apple-sized one, even. And that’s no coincidence. See, Huawei’s squeezed its answer to Apple’s Face ID into that notch. There’s a 3D depth sensing camera system, a dot projector, the 24MP front-facing camera, a speaker, flood illuminator, TOF proximity sensor and an infrared camera. Combine the arsenal of snappers around the back with the 24MP front-facing camera – which has had its aggressive skin smoothing default settings dialled back a bit, according to Huawei – and, on paper (or screen, in this case), the Mate 20 Pro looks set to be the most versatile smartphone for mobile photography you can buy in 2018. With its broad notch and curved edges, the Mate 20 Pro’s display looks unmistakably like the lovechild of an Apple X series and a Samsung Galaxy phone. But that’s not a bad thing. Huawei says the 6.39in 2k+ (3120×1440) panel is “the first curved, OLED, HDR, notch display” in a phone (though if Samsung had joined the notch party that wouldn’t be true), and its 19.5:9 aspect ratio should keep film fans happy, as that little bit of extra width allows for subtle pillar boxing to hide the notch when watching videos. Plus, there’s a second speaker hidden in the USB-C port, so you can enjoy stereo sound during your binge sessions. But that’s not all, Huawei’s also brought an updated version of the in-screen fingerprint sensor first seen on the Mate RS Porsche Edition to the Mate 20 Pro. It only works in one spot – helpfully illuminated with a fingerprint icon when you pick up the locked device – but considering the new facial recognition features, it’ll likely get the most use simply from users showing their friends, family and willing strangers just how cool it is.

Behind the Mate 20 Pro’s screen there’s a 4200mAh battery keeping things ticking over, and in the event you do run low on juice, the included 40W Huawei SuperCharge block and cable mean you can get up to 70% charge in around 30 minutes. Never ones to miss an opportunity to stick the knife in, Huawei says that’s 100% faster than an iPhone plugged into one of Apple’s own fast charge blocks (that have to be purchased separately). 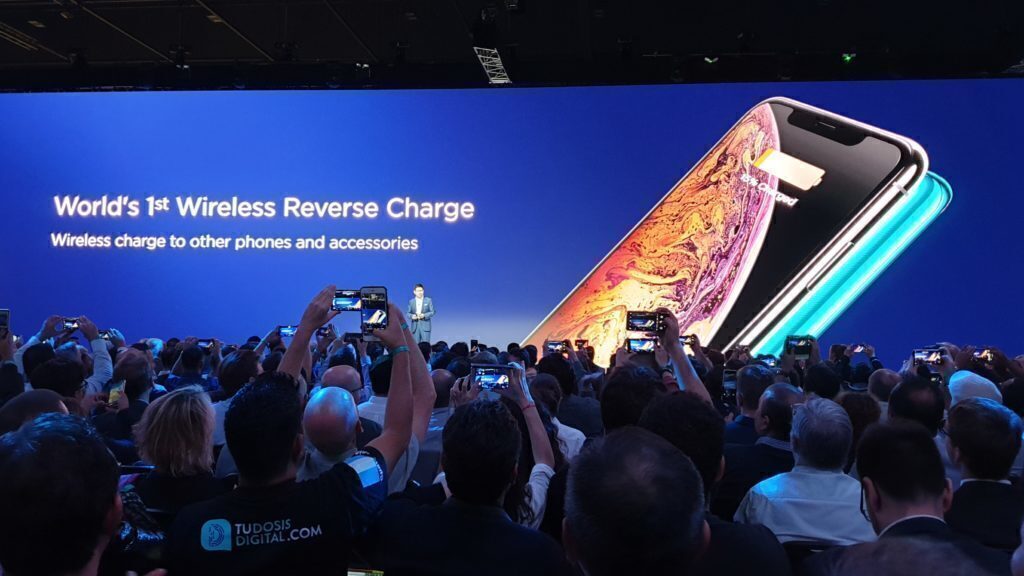 There’s also a new 15W wireless charging system (which addresses one of the main omissions from the P20 Pro), that means with a decent enough wireless charger, you’ll probably not need to plug in very often. What you might want to do instead, though, is share a bit of your energy largesse with people in need. Thanks to the Mate 20 Pro’s reverse wireless charging, it’s possible to turn the device into a QI wireless charger and do just that.

Huawei says the system can also be used to charge wearables… like the forthcoming Huawei Watch GT, presumably.

If you’re into mobile processors, you’ll have read all about the Kirin 980 processor with Dual NPU that’s the brain of the Mate 20 Pro. The successor to last year’s 970, and Huawei’s answer to Snapdragon’s 845, it’s a 7nm chip. Huawei will tell you it was the “first announced” 7nm chip, but Apple beat it to market with the A12 Bionic.

What does this mean for non-chip fans? It means the onboard AI can perform “4D predicative active tracing and real-time motion detection”. Huh? In other words, you can cut out subjects in videos to create cinemagraphs (where some elements move, but others remain static), replace backgrounds, or do artistically questionable things like selectively desaturate certain elements.

HiVision – Huawei’s answer to Google Lens – has had an update too. In addition to recognising QR codes, it’ll do on-device translation, look up landmarks, and recognise 10 million famous paintings (which is about 9.99 million more than we can). But that’s not all, take a picture of something you’re about to eat and, via a combination of AR modelling and volume calculation, you’ll get the estimated calories therein.

The Mate 20 Pro has a back-to-back double SIM tray, but one of the trays can be used to expand the 128GB of storage instead. However, in a move reminiscent of Sony’s attempts to make its M cards an alternative to SD and microSD, Huawei’s introduced a new compact card called the Nano Memory Card, that has the same dimensions as a nano-SIM. Those are available in sizes up to 256GB for now, and we’ll let you know where you can get one in South Africa when we find out. As you’d expect of a flagship, there’s also an IP68 ingress rating (which means 30min in 1.5 metres of water), and Huawei’s tacked on a new “underwater mode” to make for better snaps in the pool (or pond).

The Mate 20 Pro ships with Android 9 (Pie), which is ideal given its lack of a home button, making it perfect for the gesture-based interface Google’s introduced with its latest mobile operating system. And for the business minded, like Samsung’s Note 9, the Mate 20 Pro can switch to desktop mode with the plug of a cable.

With potent processing, an incredible camera lineup and the option to double as a wireless charger, at first blush the Mate 20 Pro is the most interesting phone of the year. Will it hold up to the hype in actual testing? We’ll be sure to let you know.