We know that, infuriatingly, Google doesn’t offer its hardware in South Africa, and if you want to get it you’ll either have to buy it from an importer, or bring it in yourself. But we also know that doesn’t mean you don’t want to know about it. Which is why we’re bringing you this round up of the announcements from Google’s Made By event for 2018.

While the rumour mill was most excited about the Pixel 3 handsets, it’s the Google Hub that we’re the most interested in getting our mitts on, so we’re going to start there.

In the same week that Facebook unveiled its creepy Portal home display-and-camera unit that tracks your movements with its zoom-enable camera, Google’s unveiled the Hub, a camera-less display that works like a Google Home speaker with a display on it (or, you know, Google’s equivalent of Amazon’s Echo Show).

Priced at $149 (R2,200 at today’s exchange rate), the Google Hub lets you set multiple timers, call up YouTube videos, or control your smart home kit. When you’re not using it, the Hub functions as a digital photo frame (like Facebook’s Portal) pulling images from your Google Photos account.

A new feature is the ability to create “Live Albums” of your favourite people, which will update automatically and use Google’s machine learning to avoid including blurry or duplicate images. We can imagine instances where this could prove relationship ruining, but we see the appeal… and considering how many images we have on Google Photos, we’re excited at the prospect of being able to see more of them in our daily lives.

Slate of the art

With the possible exception of Samsung’s most recent efforts, Android tablets have generally sucked. It’s not just that Apple’s iPads are beautifully built, it’s the depth of the app catalogue that makes them the best-selling tablet computers on earth. Google thinks it might have the answer to this with its ChromeOS-powered Pixel Slate.

The 12.3in LCD slate includes dual front-facing speakers, 8MP front and rear cameras, updates automatically, and its power button doubles as a fingerprint sensor for security.

As you’d expect from an aspirant iPad Pro killer, there’s a folio keyboard cover that doubles as a case and can be adjusted to any angle. And of course there’s a stylus, the Pixelbook Pen. The success of the Google Pixel Slate may depend on its ability to run apps like Photoshop, something the iPad still can’t do, and for many users, the last obstacle to them abandoning their laptops for a tablet-and-keyboard combination. 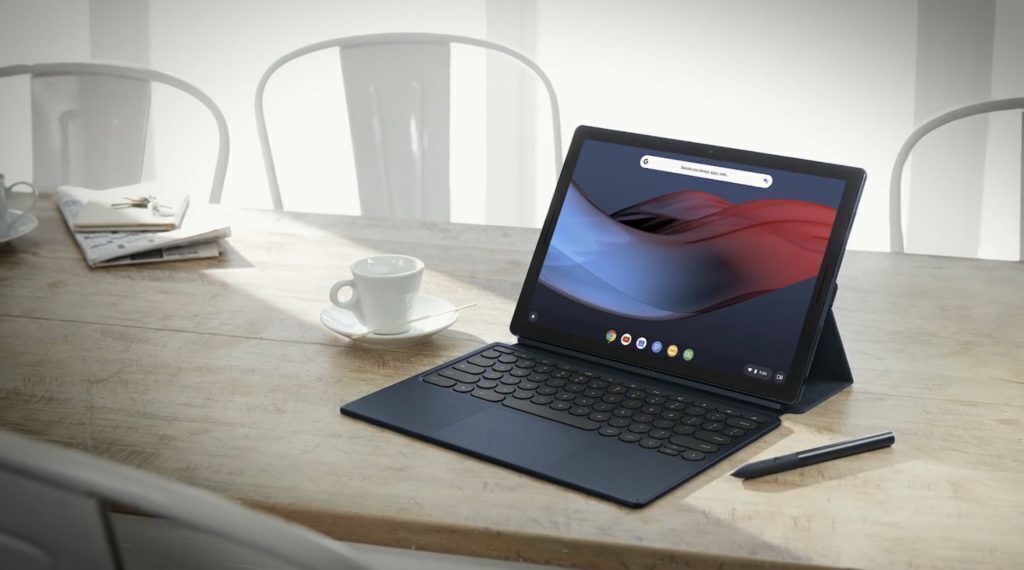 Unsurprisingly, the rumour mill was largely spot on with the Pixel 3. As with previous generations of Pixel handsets, there are two devices, a regular 5.2in version and a 6.2in XL model. The displays are edge to edge and, yes, there’s a notch up top for the speaker and front-facing camera.

The big draw of the Pixel range has long been its stellar camera, and Google’s gone to great lengths to cement that reputation with the third generation of Pixel cameras. First, it’s gotten legendary photographer Annie Leibowitz to endorse it and take it on a cross-country portrait-shooting tour, and the company convinced (we suspect there was cash involved) publisher Conde Nast to shoot seven magazine covers with the Pixel 3.

Other camera tech includes HDR+ (which stacks shots for better dynamic range), Top Shot (which chooses the best shot from a series) and Super Res Zoom, which combines AI smarts with the camera’s optical abilities to create better zoomed images. Another feature called Night Sight sucks detail out of lowlight images and, impressively, will be available for older Pixel handsets, too thanks to a software update.

There’s also a double front-facing camera for wider selfies, and a chunk of hardware updates that we would tell you about if they weren’t already available all over the internet, and if talking about them didn’t make us sad. There’s also the ability to screen calls with automated messages to callers, and a new wireless charger called the Pixel Stand. Now, Google South Africa, if only we could actually get this kit here without having to resort to the generosity of jet-setting pals. C’mon, we believe in you.