With what we were expecting from the V-Moda Crossfade LP2 headphones when we took them from their possibly over-engineered box, it was pleasant to be positively surprised. We started out with high hopes, since the suppliers had taken the trouble to send us Stuff-branded metal shields for the outer ear-cups, and were still impressed despite our high bar-setting. The Crossfade LP2s aren’t just a pretty face. 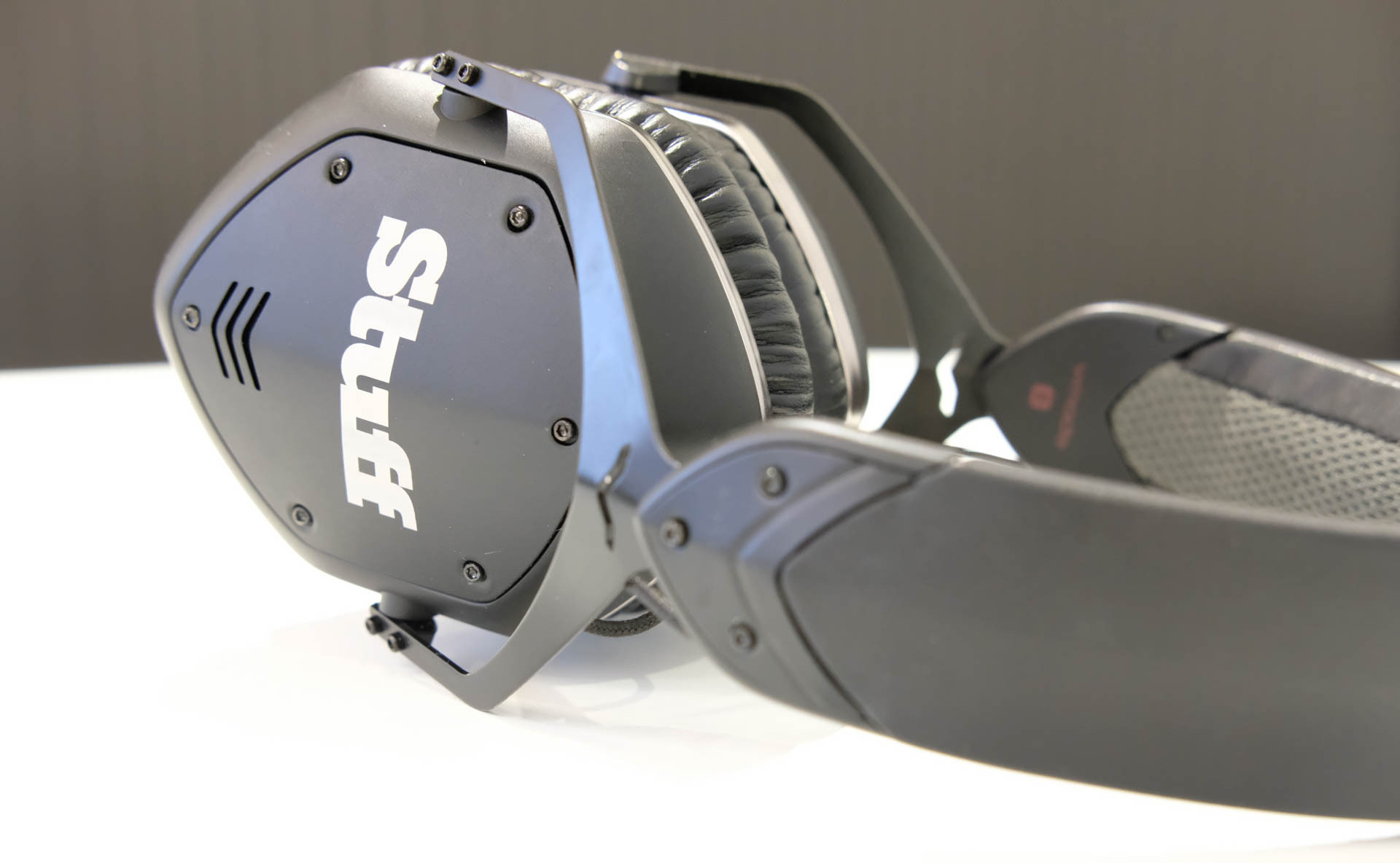 Which, obviously, means that they’re rather damned attractive to look at. They just happen to sound good at the same time. V-Moda’s cans are a bit of a throwback in that the LP2s are resolutely wired. There’s no wireless option here and you’re going to be tethered to whichever device you’re listening to but they more than make up for the inconvenience.

The Crossfade LP2s are very solidly constructed, with spring-steel construction through the headhand (which V-Moda calls Steelflex) and holding the ear-cups to the band. We’d stack this pair up against just about any other brand in terms of durability, with the benefit that the steel construction manages to be very lightweight.

The drivers are housed in plastic cups, which have light metal plates screwed into place on the outer sides. These plates can be customised, 3D-printed or engraved. We were provided with the Stuff logo for this particular review. The cushioning is among the most comfortable we’ve ever experienced in headphones: a good balance of padding and softness. We’ve had similar sensations from Steelseries’ Siberia headphones but the Siberia cans come off second-best here since they feel a bit like oversized marshmallows jammed against your melon. There is such a thing as too soft.

We’re also really impressed by the LP2s ability to keep what we’re listening to in, and the ambient noises around us out. There’s no active noise cancelling here, but we don’t find ourselves missing it that much when the isolation is so good. Plus, for our use in the office, being able to hear a colleague bellowing in our direction is rather useful. The Crossfade LP2s are not just a set of wired headphones, though. V-Moda has shipped them (in the aforementioned fancy box) along with a full set of extras — two cables, one with in-line controls specifically intended for listening (or making calls) with a mobile device, as well as an extra adapter for plugging into 1/4in ports — you know, in case you want to plug into a guitar amp or a proper hi-fi. The accessories are housed in a very sturdy hardshell case, which also contains the headphones themselves. If you’re transporting a set of R3,500 headphones anywhere, you really don’t want them to be crushed — no matter how capable they seem at shrugging off the abuse. Yeah, the case is definitely one of the things we love about this set. The Crossfade LP2’s looks and extras would be nothing if the sound was a limp experience. Pleasingly, the audio experience is as good as the more tangible features would suggest. The 50mm dual-diaphragm drivers are capable of reproducing almost everything the way it should be listened to. Bass is clear without being distorted (mostly — we’ll get to that), mids are defined and highs are clear and sharp. The result is a detailed experience, almost across the board.

Almost. There doesn’t seem to be any rhyme or reason to it but certain tracks played through V-Moda’s cans resulted in overbearing bass that rumbled the rest of the track into mush. The problem seemed to be confined to set tunes, too, so other songs from the same album(s) didn’t display the same issues. A perfect storm of frequencies, perhaps? The issue didn’t detract from the overall listening experience, which was 99% excellent. That’s a damned good ratio and even the odd bit of mush did little to take away from what are an excellent-sounding set of over-ears. Why would you want a wired set of headphones over a wireless pair, especially when fewer mobile devices are being released with space to plug them in? That’s sort of a trick question — some folks love the idea of not having to worry about batteries and couldn’t care less that Apple still isn’t going backwards in time. They just want a set of headphones that’ll work when you plug them in, sound good across the board and won’t break overnight — all boxes that the V-Moda Crossfade LP2s tick. The price might seem a bit more than you’d want to pay for headphones with wires but that’s just because you haven’t seen them in the flesh. Or steel, as it were. Great sound and solid construction that’ll last, with the option to get creative with the headphones themselves? Yeah, we like these a whole lot.