This year iPhone fans have quite a challenge ahead — which one of the extremely similar iPhones should buyers choose?

Apple unveiled three different iPhones a month ago, and all three are compelling in their own right. Granted, all three look about the same at a glance, but it’s the small (and bigger) differences that’ll really determine your choice between the iPhone XS, iPhone XS Max, and iPhone XR.

So what are the actual differences? And which one will suit your personal needs the most? That’s assuming you’ve got anywhere between R15,000 and R32,000 to spare. Here’s what we think, now that we’ve had a closer look at the iPhone XS and XS Max (the XR only ships later this month). The new iPhones are nearly identical on first glance, and all successors to the iPhone X, with the same kind of screen-centric, edge-to-edge design on the front, glossy glass on the back, and plenty of the premium polish you’d expect from an iPhone X… plus there’s the notch, first popularised by Apple, and now found on almost every Android device that’s not a Samsung.

But then, there are differences, and they’re a little more significant than you might expect. The iPhone XS and iPhone XS Max are effectively twinsies, except that the Max is larger (to accommodate the bigger display). The two come in the same colours in stainless steel.

The iPhone XR is the odd one out, but it’s definitely not the ugly duckling. Size-wise, it’s positioned between the two XS models, but it’s on the thicker side. Instead of stainless steel, the XR is constructed from aluminium, and it comes in a range of backing colours – including blue, yellow, and coral.

Both XS handsets have an IP68 ingress rating, which means they are pleasingly water- and dust-resistant. They also have the ability to survive a drop of up to two metres (though we wouldn’t want to test this) and can survive water (and any liquid for that matter – except corrosives and lava, presumably) for up to 30 minutes, while the iPhone XR sticks with IP67 (1m of water for 20 minutes). 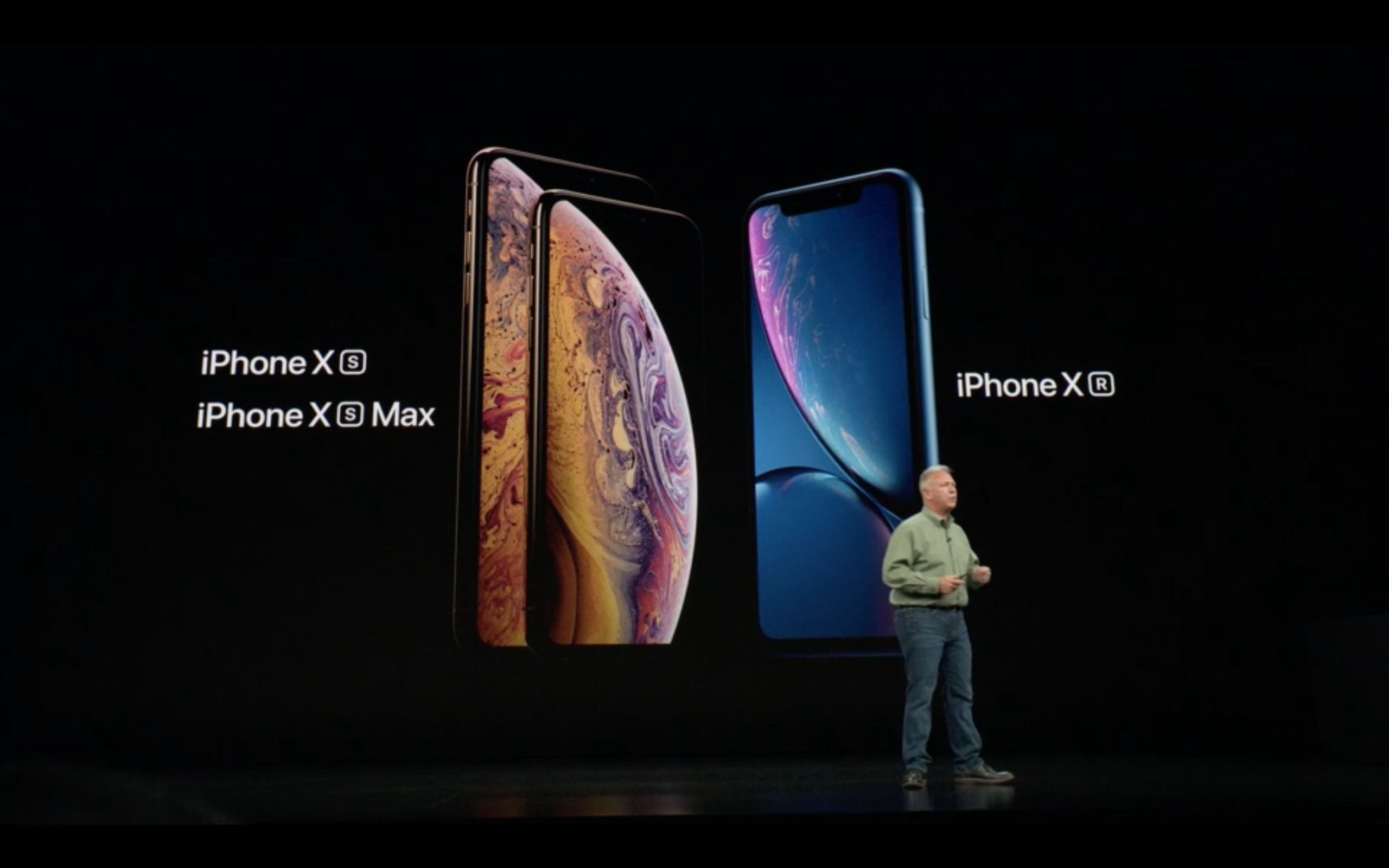 All three phones have large displays – but there are big differences in panel quality and resolution.

The iPhone XS and XS Max both use Super Retina HD OLED panels, much like the iPhone X, which provide brilliant contrast and true black. The XS-displays offer 60% more dynamic range than its predecessor, according to Apple’s marketing materials.

Both phones also feature 458 pixels per inch, with a 2,436 x 1,125 resolution for the XS and 2,688 x 1,242 on the XS Max. The larger Max can also handle apps in landscape view, even allowing dual panes in supported apps for the extreme multitaskers.

On the other hand, the iPhone XR sticks with an LCD panel. A Liquid Retina panel to be exact — and the 1,792 x 828 resolution is deeply underwhelming. It matches the 326ppi count of the iPhone 8, which while not exactly poor, looks a little fuzzy compared to today’s resolution standards.

Also, the iPhone XR has a fair bit more bezel around the display, seemingly due to the different panel tech in play, plus it lacks the 3D Touch pressure sensitivity still found in the iPhone XS and XS Max. More is better when it comes to smartphone cameras, right? Sure, usually, and it’s true that the dual-camera setups of the iPhone XS and XS Max have some perks. But the iPhone XR also seems pretty well-equipped with its single shooter.

All three have a 12MP (f/1.8) wide-angle camera with optical image stabilisation on the back. Likewise, all three of them features Smart HDR — it uses a faster sensor and improved processor to snap several concurrent photos before stitching them into one great result. We’ve seen it in action on the XS and XS Max, and it’s fantastic.

The iPhone XS and XS Max benefit from the second back camera, a 12MP telephoto (f/2.4) lens, which enables 2x optical zoom and extended digital zoom, as well as Portrait shots and bokeh effects. You can adjust the focal depth after taking a Portrait shot, which lets you tweak background blur from just a little bit blurry to oops-we-forgot-our-glasses-at-home very blurry.

Interestingly, the iPhone XR can also do Portrait photos via smart software rather than a second back camera, although it remains to be seen whether the results will be as strong.

They all pack the TrueDepth front-facing camera system from the iPhone X as well, with a 7MP camera flanked by sensors that can scan your face for Face ID security and Animoji. It also includes the depth slider functionality for selfies. All three of these X-devices are pretty much identical when it comes to performance – and collectively, they represent what is now the most powerful smartphone on the market.

The A12 is the first 7nm chip to reach a production smartphone (though Huawei’s about to throw its own hat in that ring), and it includes a massively enhanced Neural Engine that is up to nine times faster than before, capable of 5 trillion operations per second. It’ll learn from your usage, recognise patterns and power augmented-reality experiences, if you’re into that sort of thing.

The only difference comes down to RAM. Apple hasn’t said anything officially, but rumours suggest about 3GB in the iPhone XR, while the iPhone XS and XS Max both have 4GB RAM. The pricier phones are definitely better equipped to handle multitasking and processor-taxing needs, but it shouldn’t make a huge difference given how slickly Apple’s iOS 12 is integrated with the company’s hardware. All three of the new iPhones promise more battery life than their predecessors… and the iPhone XR, surprisingly enough, is the best of the bunch. It claims to handle up to 15 hours of internet usage and 16 hours of wireless video playback on a single charge.

Meanwhile, the iPhone XS should get around 12 hours with continuous browsing and 14 hours of video playback. The iPhone XS Max bumps up to 13 hours of internet and 15 hours of video. Luckily they all offer wireless charging to get you through those long days in the office, and they have fast-charge capabilities, too… though you’ll need a buy a fast charger separately as none of them get one in the box.

The XS models come in 64GB, 256GB, and 512GB storage sizes, while the iPhone XR aims a bit lower with 64GB, 128GB, and 256GB editions. No support for external storage, of course… these are Apple phones, after all.

Of course, we all know Apple’s dropped the 3.5mm headphone jack, but until now you at least got a Lightning-to-3.5mm adapter in the box… no longer. Apple’s not shopping adapters with its new phones, or new stock of its old ones. If you want one, you’ll need to buy one for $9 (so probably R200 or more here). Boo. Hiss. Three iPhones, three (some of which are ridonkulous) price points, and three target buyers. Which one to choose?

The iPhone XR is ostensibly the new ‘entry-level’ iPhone with those specs (and no pricing yet — but it should be sub-R20k). It’s not as premium or high-end as the XS models, but the colours are pretty alluring. If the XR turns out to be priced as high as we expect (following the shock of the XS pricing), it might be a better bargain opting for the iPhone X, where pricing starts at R16,000. Sure, you’ll only get the slower A11 chip and a smaller screen than the XR, but that screen will be OLED instead of LCD, and you’ll get dual rear cameras.

Meanwhile, the iPhone XS is a straight-up iPhone X replacement at R22,000. Same size, same look, new tech. If you loved the size and feel of last year’s phone and just want the feature enhancements, or if you coveted the iPhone X but weren’t ready to upgrade before now, then this might be the phone for you. Given the edge-to-edge design, this large-display phone can’t help but feel pretty comfortable in most hands.

And if you have larger hands or just love an enormous display, then you might consider spending the extra cash for the 6.5in iPhone XS Max. It seems huge, but really, it packs that massive screen onto the approximate body size of the iPhone 8 Plus. It’s surprisingly comfortable to use.

Granted, R24,000+ is an absolutely incredible amount of money to spend on a smartphone. But if you could justify the iPhone X’s price (or can justify the XS’s price), then what’s another R3k for a larger screen and bonus battery uptime?