The previous Huawei reveal had most phone manufacturers up in arms — three camera sensors? Are they mad? Turns out the Huawei P20 Pro is still one of our favourite handsets from 2018, which is why we are really amped for the upcoming Mate 20 Pro announcement set for 16 October in London, England.

The rumour mill suggests October’s launch event will present us with three new Huawei handsets — the Mate 20 Lite (which has already been announced), the Mate 20, and the higher-end Mate 20 Pro.

On the subject of the Mate 20 Pro specifically, a new leak has given us a first glimpse of what the device might actually look like – including a unique triple camera setup.

Like the P20 Pro, the Mate 20 Pro is expected to have three camera sensors, but in a square arrangement including the flash. Hopefully we don’t see the Mate 20 Pro launch with more than three sensors… because that would just be ridiculous (or would it? Heck, maybe five sensors aren’t far off).

The overall design veered off the path Huawei took with the P20, with a smaller chin and a wider, more iPhone-esque notch. The one real indicator that the devices featured in the leak are part of the same family is the gradient finish, though. We do love that finish… pity most buyers will wrap it in a cover. 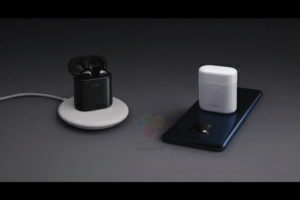 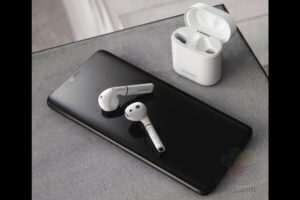 A rumour also indicates that Huawei will reveal their second iteration of a set of AirPod-like wireless headphones, which you’ll be able to charge wirelessly with the Mate 20 Pro device, according to renders.

They are called the Freebuds 2 Pro, and they will likely support Hi-Res audio, Google Assistant, and artificial intelligence-powered noise reduction. The microphones could use bone-conduction technology to more effectively capture voice too.

The buds are unlikely to come with the device, and will be sold separately. The wireless charging feature makes them an ideal companion to the Mate 20 Pro though. These should also be backwards-compatible, which could make them the perfect companion for P20 Pro-owners.

And finally, the specs Apparently Huawei put in an order for 6.9in OLED screens with Samsung earlier this year, and those are obviously intended for smartphones (or the weirdest Huawei portable Mi-Fi devices we’ve ever seen).

According to the invite to the October event, the Mate 20 Pro will be fitted with the new Kirin 980 processor — the second mobile processor on the market to use a 7nm chip (after Apple’s new A12 Bionic). This processor boasts a massive amount of power, and it will run the latest version of Android with Huawei’s own EMUI 9 user interface on top.

Huawei will announce the Mate 20 Pro alongside its siblings on October 16, and the amount of excitement we are feeling cannot be quantified. We’ll be at the event to bring you confirmation each rumour as it happens.