Apple’s new iPhone lineup now includes three devices for 2018 — one of the first times that an off-the-wall rumour turned out to be true on the first go. Maybe there’s something to that talk of an Apple-made car after all. As expected, Apple announced two new handsets in their iPhone XS line, as well an all-new device — the LCD-screened iPhone XR, along with the new Apple Watch Series 4. But let’s start at the beginning.

The iPhone XS is the most advanced iPhone Apple has ever created? Tim Cook made quite the bold claim onstage in Cupertino but since people actually use these devices, he also has to back it up. Based on what we saw from the first two handsets Apple had on show, they’ve gone and done it. Starting with the display.

Display: Super Retina across the board 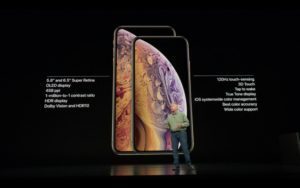 Apple’s gone and made a very attractive smartphone this year. Surgical grade stainless steel. A new gold finish. Minimal bezels, and the most durable glass used on a smartphone, ever? Apparently. Whether it’ll dethrone the Samsung S9+ as the best-looking phone we’ve seen this year will have to wait till we have an iPhone in hand.

There are a collection of other quick specs worth noting — the XS and XS Max will be available in Gold, Silver, and Space Grey finishes, with a new IP68 waterproof rating. Long story short, it’ll take longer to drown your phone, and you’ll probably have to use nuclear waste to do it. Apple tested the rating in swimming pools, the ocean, tea, wine, orange juice, and beer — which is basically a South African long weekend on the coast. But it’s the screen that’s really been designed to impress.

There’s this new thing Apple has decided to call Super Retina. In the case of the iPhone XS, that means a relatively bezel-free 5.8in, 2,436 x 1,125 458ppi OLED panel with Dolby Vision and HDR 10 support. We’re looking at the exact same features in the iPhone XS Max, except that the screen size has been upped to 6.5in and the res to 2,688 x 1,242 — which allows Apple to keep the 458-pixels-per-inch rating across both OLED-screened devices.

Apple’s True Tone colour reproduction from the iPhone X and iPad Pro tablets is in evidence, too, and both devices have a 120Hz refresh rate. Quite a nice little upgrade on previous screens. Apple seems to think they’ll make your HDR content look better — we’re inclined to agree and we haven’t even used the phones yet.

Apple’s Face ID system is sticking around and it’s getting faster (more on that in a moment — everything is getting faster). Apple’s included better speakers in the XS family of phones, offering so-called ‘wide stereo’. Which basically boils down to ‘You won’t want to use your headphones’ but also, other people might hate you if you insist on playing ‘Nkalakatha’ at full volume without them.

Processor: All the cores Here’s a heck of a thing. Apple’s new (and totally expected) processor upgrade was perhaps the most exciting bit of their announcement. Apple unveiled the A12 Bionic, the industry’s first 7nm chip, and it’s a monster. A 6-core CPU (dual performance cores, quad efficiency cores) alongside a quad-GPU (which Apple say is up to 50% faster than the one in the A11) is just the start.

There’s also an on-chip octa-core neural engine, which handles all of the iPhone XS handsets’ 5 trillion operations per second. By comparision, the A11 topped out at 600 billion operations per second. If you’re just counting cores, that’s 18 cores in this chipset — though only six are for standard processing. The A12 Bionic also supports up to 512GB of storage on an iPhone thanks to new storage controller. And, of course, Apple claims it’s the most powerful processor ever in a smartphone.

Machine learning features are getting a big boost by way of Apple’s heavily-upgraded neural engine — Apple’s claiming real-time machine-learning for the iPhone XS series, meaning that intelligent searches, Animoji tracking, and camera functions will all see a boost, as well as app launches which will be up to 30% faster.

Siri Shortcuts, which can automate a lot of on-device (and life) functions, have been introduced and these functions get their smarts from Apple’s neural tech. AR is getting more attention on the iPhone XS series, thanks to the neural upgrade, and developers will have the option to include more machine learning functions in their apps — because the new iPhones will support it.

Bethesda’s Todd Howard popped in on Apple’s event to show off a new Elder Scrolls game, called Blades, on-stage and impressed with the advanced graphics processing possible on the new iPhones, thanks to the collection of new processing hardware. The game looks like a very polished first-person adventure title — one that we’ve never seen before. Which is a relief, because we were convinced that we were looking at yet another re-release of Skyrim.

Camera: Of course they made it better 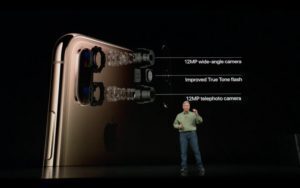 Apple’s new devices are getting a new camera arrangement but, as with just about everything this year, it’s less about better hardware and more about better support behind the scenes. The iPhone XS and XS Max are both getting dual-cam setups, consisting of a 12MP f/1.8 6-element wide-angle lens with optical image stabilisation and a 12MP f/2.4 6-element lens on the rear. The front-facer is a 7MP f/2.2 sensor, one that has been given a speed bump, along with the IR cam and dot projector from the Face ID system. But that’s only the beginning.

The new A12 Bionic chip now does a lot of Apple’s heavy photography lifting, with the image signal processor and octa-core neural engine working together to make users better photographers. It’s another illustration of Apple’s machine learning emphasis this year and they’re not going at it by half measures. Do you want your phone performing up to 1 trillion operations on each photo you take? Sounds great to us, but we doubt even a device as smart as this one will do much about a finger over the lens.

The upshot? Gorgeous photos, as demonstrated by what was seen on stage. Smart HDR and better bokeh are some great functions but Apple also demoed post-shot depth-of-field adjustment (something Huawei and Samsung have had for a while now, mind you). Still, Apple will probably agree it does after-the-fact blur fiddling better, and of course this feature is also powered by Apple’s new processor. That neural engine’s a lot more useful than we expected at first blush. Dual SIM is definitely a thing for the XS line, though Apple only mentioned it in passing. There’s a feature called DSDS — which stands for dual SIM, dual standby — where an eSIM will act as the secondary SIM card. That means there’s no second physical SIM, although there is a special edition being made for China that does allow for a second physical card. Maybe we can snag one of those somewhere, as we don’t have access to Apple’s eSIM tech here at home yet. Though, given South African mobile operators’ longstanding aversion to dual SIM handsets (and, you know, competition)… we’re not holding our breath.

And then there were three 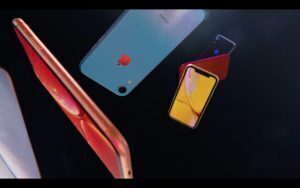 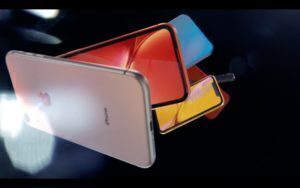 Apple also unveiled the expected third member of the party — the iPhone XR. There was dubstep, for some reason.

It might have something to do with the aluminium chassis coming to the XR, which will be available in White, Black, Blue, Coral, and Yellow colour options. Oh, and there’s also a Product Red version. The iPhone XR looks a lot like the iPhone X, if the iPhone X featured an LCD display. An LCD display that Apple reckons is the most advanced found in a phone. We can believe it, since it’s edge-to-edge. Apple calls this particular screen Liquid Retina — it’s a 6.1in, 1,792 x 828 panel.

The iPhone XR shares a lot of DNA with its most expensive brothers. The IP68 rating, the A12 Bionic processor and all that entails, and even one of the camera sensors from the iPhone XS and XS Max. The 12MP f/1.8 wide-angle sensor with optical image stabilisation to be exact. The XR is capable of bokeh using a combination of Apple’s hardware, that very smart neural engine, and a single lens. What sorcery is this? Oh, yes, and Apple’s also managed to convince this single-lens system to work with post-shot depth-of-field modification as well.

Face ID is present, thanks to the upfront TrueDepth camera, and there were some screen haptics functions shown off during the presentation too. It’s early days yet and it’s going to be a while before we see one of these in person but we’re already liking Apple’s second crack at a cheaper iPhone a lot more than the first.

Pricing and availability? We’ll get to that Apple’s iPhone XR will be launching in three different size configurations. Expect three storage versions of the LCD-screened addition to the Apple family, and a starting price of $749 (roughly R11,250) — which is kinda budget for an Apple device, we guess. That one’s going to be up for pre-order on 19 October, with a launch taking place on 26 October this year. Apple… didn’t say which countries it will be coming to at launch, but we don’t expect to see it here before November.

The pair will be ready for pre-order on 15 September and they’ll start shipping internationally on 21 September. South Africa has a slight wait ahead, though — the XS handsets launch here on 28 September (as confirmed by the iStore). No more mucking about for us, then. We’re just awaiting local pricing for the hardware — we’ll let you know as soon as we have it.