Sometimes it’s nice to look at the world in a different way. And we don’t just mean though colour-tinted glasses or by peering between your own legs. We mean peering at a whole new reality, or a reworked version of the one we’re used to, at least. That’s what you get from Acer’s Windows Mixed Reality headset, a (relatively) affordable bit of virtual reality (VR) gear that’s aimed at triggering widespread user adoption. Don’t let the “mixed” bit mislead you, this is VR through and through.

Virtual reality is still a bit of an emerging technology, one that we hear about far more that we get to experience, here in South Africa particularly. There are more than a few barriers to entry: High PC system requirements, expensive kit, occasionally having to import components — it can get a bit much. Sony’s PlayStation VR is about the most cost-effective solution, though you’re still going to need a PS Camera, those bulbous-ended PS Move controllers and, preferably, a PS4 Pro. Even then, you’re stuck with gaming-only applications and then just those which have been released for Sony’s system.

A PC-based VR headset offers the widest range of use for this fledgling technology, but the Oculus Rift is a mission to buy here and the HTC Vive is a weighty, expensive piece of hardware that requires you configure a large space to properly use it. Acer’s offering, based on Microsoft’s tech, attempts to be more accessible — you don’t need to spend quite as much on the hardware, the system requirements to use it are lower, and it’s not complicated to set up at all. But is it worth dropping R8,000 on one of these pieces of VR gear? One of the best thing about Acer’s VR hardware is that it is lightweight and really, really simple to connect to a PC. There’s a single cable with two ends — one that plugs into the HDMI port and another into a USB 3.0 port for power. There are no base stations, the two included controllers are wholly wireless (and battery powered) and there’s only one other port — a 3.5mm headphone jack where you can connect your favourite pair of (wired) headphones for some auditory immersion. Or you can opt to blast the sound out of whichever PC you happen to be running your VR content on, but that’s not quite as elegant a solution.

The Windows Mixed Reality setup is made from very lightweight plastic which sits comfortably on your head, while the band that wraps around your head can be loosened and tightened using a little wheel for a snug fit. Extended use? Not an issue, unless VR makes you nauseous. What you won’t get is a stiff neck brought on by balancing a lot of weight on top of your melon — this is the lightest VR gear we’ve used that wasn’t made of cardboard and cellphones. There were some issues with the foam padding over the nose, but those we laid at the door of this VR kit being a demo unit. It had held up pretty well, considering we were not the first people to use it.

Build overall is hardy — the controllers are light enough that you won’t break someone’s nose if you accidentally bonk them (an actual hazard during review) but not so flimsy that you feel you’re going to crush them. The headset itself is also capable of standing up to a bit of abuse — though why you’d want to abuse a VR headset is beyond us.

Setup: All about the software 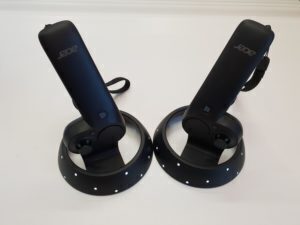 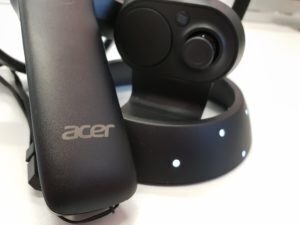 Setting the Acer Windows Mixed Reality headset up is mostly a matter of connecting the cables and installing a couple of software updates. The Acer notebook we used needed a substantial set of Windows Updates done before we could install all of the software required to run the headset on Steam. That was because we were the first to boot up a brand new PC and there were a raft of updates waiting. However just getting the headset to work in its native Windows environment took very little time at all — that compatibility was available right out of the box.

Odds are most Windows 10 users who have a machine that satisfies the minimum system requirements won’t have to go through all of the software updating we had, since Microsoft’s OS should have updated everything on its own by now. But you’re going to have to make sure that your PC is up to the task, hardware-wise.

The machine we used was way, way above basic spec but if you’re rocking an Intel Core i5 (6th gen for desktop machines, 7th gen with HyperThreading for notebooks), 8GB of RAM, a GTX 965 or a AMD RX 460 and have a USB 3.0 port and HDMI 1.4 or 2.0, you’re on your way to running some mixed reality. That’s not entry-level spec by any means, but it’s also not dual GTX 1080s and a spanking new Intel Core i7 HK-series CPU either. Even so, you’ll want to beat those lowball specs at least a little — especially if you’ve got your sights set on Steam VR.

Performance: Up to most tasks 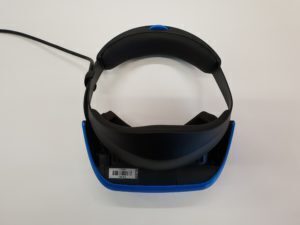 We tested the Acer Windows Mixed Reality headset using Acer’s own Predator Helios 500 gaming notebook (look out for its standalone review soon) — a beast of a PC more than up to the task of providing decent VR. (It’s also worth mentioning that we are giving away a Predator Helios 500 in the September issue of the print magazine.) We used a couple of applications to put the headset through its paces — the stock mixed reality hub was one port of call, since Microsoft lets you play in, move through, and modify your own virtual space as a matter of course but we also did what anyone with a VR headset would do — play some games.

We gave the short-but-awesome Trials on Tatooine a go, gave ourselves a few bouts of motion sickness in the Portal 2 mod Portal Stories: VR for Steam and then went out and punched trees in Minecraft VR — which was the undeniable highlight of the test.

The early time spent with both Trials and Portal Stories was marred by connection issues with the controllers. Both use Bluetooth and getting them properly detected was a frustrating hour or so. Once they were correctly synced, however, the experience smoothed out considerably.

What’s striking about the Windows Mixed Reality setup is just how responsive the controls are. Whether you’re waving around a Portal gun, swinging a pixel pickaxe, or just using the thumbsticks to move around your clifftop mansion so you can place another lizard on a bicycle in a strange position, what you’re seeing in VR corresponds well with your actual movements. We’d have loved to have gone a little deeper, with more intricate experiences like Arizona Sunshine or Skyrim VR but sadly our games-totally-bought-for-hardware-reviews budget is non-existent.

Still, what we played and experienced was enough. The image provided by the headset’s twin LCD panels is bright and clear, with Minecraft in particular being a beautiful experience — perhaps because it is relatively lightweight in terms of required resources. It was also a fairly mind-blowing experience watching Minecraft morph from a 2D screen to a full-on 3D landscape. Creepers are a lot creepier when they can actually sneak up on you.

We were able to make use of the headset for extended periods, say an hour or more inside virtual reality, without any serious ill-effects other than disappointment that we had to come back to real reality. Perhaps something a little faster-paced, like Beat Saber, would have changed that impression but we managed to get off without any nausea for this one. That’s always a plus.

Another plus is just how popular the Acer Windows Mixed Reality headset made the Stuff folks. It was telling that just about everyone who ‘happened to be passing by’ and subsequently spent some time in a VR environment found the controllers simple to use and in-world navigation easy to figure out. The real test of something like this isn’t whether the Stuff staff can use it — it’s whether anyone who doesn’t spend their days up to their eyeballs in tech can. As it turns out, Acer’s gear is very easy to use, even for so-called ‘normal’ people. Do you need a virtual reality headset? The answer to that is “No.” Nobody does. Not yet. But if you want one, before they spread out and conquer the world, then you could do a lot worse than Acer’s Microsoft collaboration. The Windows Mixed Reality headset comes with an R8,000 recommended price tag, (though we have seen it online for a shade cheaper), which is lower than most competing hardware, and it doesn’t have the lengthy setup and space requirements of the Vive or the Facebook pedigree of the Oculus Rift. Yes, we’re counting that last bit as a positive. Acer’s unit has slightly lower system requirements across the board to boot, though you’re going to want to have better hardware than the bare essentials for a good experience. If you want to be a VR early adopter but don’t have a massive budget or the space to dedicate a room to virtual reality, the Acer Windows Mixed Reality headset is a good choice.