To help distinguish between its crop-sensor mirrorless range and the new full-frame one, Canon’s dubbed the new one the EOS R. The camera is built around a 30.3MP full-frame sensor with an ISO range of 100 to 40,000. The sensor uses dual-pixel autofocus and is paired with Canon’s DIGIC 8 image processor. It should be easy to handle in the dark, at least. It looks like a smaller DSLR, and includes an OLED electronic viewfinder above a touch-sensitive display. For those leaning more towards video — the EOS R system is fully capable of shooting 4K resolution, and you’ll be able to output in 10-bit over HDMI with the Canon Log feature.

All the new lenses announced in the range have dedicated control rings for focus and zoom, though it looks like aperture will need to be set from the camera body.

Canon’s also included the option to customise physical settings on the camera body so that users can have their most used settings readily available.

The new EOS R lenses are the RF 24-105mm f/4L IS USM, the RF 50mm f/1.2L USM, the RF 28-70mm f/2L USM, and the 35mm f/1.8 MACRO US STM. The first of these is a general purpose zoom, the second is super speedy standard lens, the third is a faster zoom and the last is a macro prime lens. Compared to Canon’s exhaustive selection of EF and EF-S lenses, it’s a small selection, but you can bet it’ll grow in years to come. 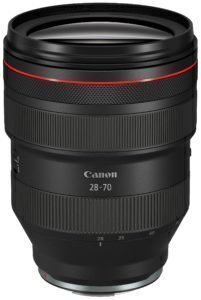 Why go for a new range of lenses at all? Like Nikon’s done with its new full-frame mirrorless, Canon’s opted for a new lens mount for the EOS R, one that’s 54mm in diameter. Thankfully, though, Canon’s also also launching three lens mount adapters (one stock, one a control ring mount, and the other supporting drop-in filters) for the new EOS R lenses, which means that anyone with previous Canon EOS DSLR cameras can play with the new lenses, while also using EF and EF-S-mount lenses (which they likely already own) with the new mirrorless platform.

We don’t have any local pricing for the new range yet, but pre-orders will open on 12 September 2018.