Lenovo’s taken the wrappers off a huge selection of kit at IFA 2018 in Berlin, but the one that’ll get power users most excited is the update to its ThinkPad X1 flagship, called the ThinkPad X1 Extreme. Intended for the most demanding of business users who also want to watch Netflix in 4K HDR after they knock off, or play the latest PC games without having to dial down the frame rates, the X1 Extreme takes no prisoners.

Fans of the ThinkPad range will know what to expect in terms of build quality — in short, it’s excellent, mixing aluminium and carbon fibre (the choice material of luxury gadget and car makers alike thanks to its durability and low weight). Lenovo’s also quick to point out it’s included a no-compromise keyboard, which means full-sized keys with good travel (1.8mm, to be precise). A dig at Apple’s somewhat maligned MacBook and MacBook Pro keys? You betcha. The package weighs in at 1.7kg, which may not be class-leading for a 15in device… but then, most other devices don’t pack as much oomph under the hood. Users can choose a CPU up to a Core i9, and yes, it’s Intel’s 8th generation processors on offer. While there’s an SSD for speedy start-up and load times, buyers can also opt for a dual HDD setup, or even Raid 0 or Raid 1. Meanwhile, on the memory front, it’s possible to cram up to 64GB of RAM into the X1 Extreme.

Though office sorts are the most likely buyers of the X1 Xtreme, you can bet if they won’t compromise on specs, they won’t compromise on A/V either. Lenovo’s packed support for both 4K Dolby Vision (as supported by Netflix) and Dolby Atmos (Dolby’s latest surround sound audio standard) into its new flagship. Of course, to enjoy the former you’re going to need to opt for the 4K display, though there will be a Full-HD option, too, if you prize battery life over resolution. 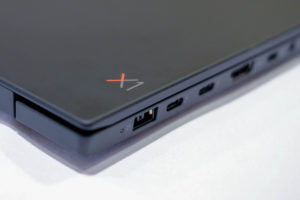 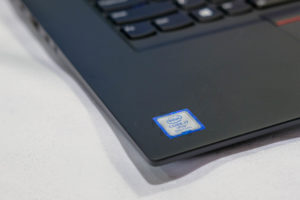 The HD version will last up to 15 hour on a charge, while Lenovo’s claiming up to 9.7 hours on the 4K panel. But, with support for rapid charging built-in, we’d be inclined to go with the 4K version ourselves. There’s also a G-Force GPU on board, for those times you need to kick off the formal footwear and frag some noobs at high frame rates. Into virtual reality? Yip, it’ll handle that too, whether via Lenovo’s own Mixed Reality Headset or an Oculus Rift.

And if you decide to ditch the spreadsheets to edit your latest GoPro footage of your weekend wake-boarding adventures, you can expect support for 10-bit video. Plus, editing it ought to be easy enough considering the display supports touch and is pen-enabled.

On the security side of things, there’s a fingerprint sensor, support for Windows Hello face recognition via the webcam (which also includes a physical ‘camera privacy shutter’), and even Kensington Lock support. 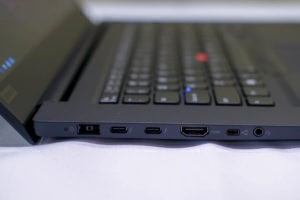 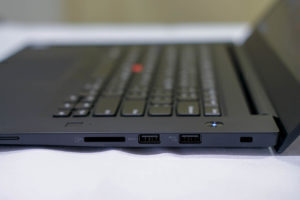 We got a little hands-on time with the X1 Extreme and can confirm everything about it feels unequivocally premium. At 18.4mm thick it’s a big laptop, make no mistake, but it’s also one that brooks no compromises.

It’s too early to confirm South African pricing or when you’ll be able to get your hands on it, but we do know pricing for the X1 Extreme will start at €1,695 in the EU. That’s around R30,000 using a straight conversion, so expect it to be nearer R35,000, and well over R40,000 by the time you’ve added a few options.