When the Galaxy Note 9 ships, Samsung will have two very large 2018 flagships on offer, since the Galaxy S9+ released earlier this year. And they’re very similar in many ways, especially design — but Samsung has pulled out a few tricks with their most recent Note edition.

Both sport great screens, sleek glass-and-aluminum bodies, plenty of power and perks, but they also vary in some ways, many of which are quite small  — aside from the S-Pen stylus. So if you don’t mind spending a bundle on a big, sleek Android phone, which one of these is really worth your money?

Here’s our initial take now that we’ve been hands-on with the Samsung Galaxy Note 9 for a few days.

Design: Two of a kind The Note 9 is just a smidge larger, and the screen doesn’t curve as sharply on the sides. Also, the Note 9 has the S-Pen stylus, along with the dock to slide it into on the bottom of the phone. You’ll feel a slight difference between them, and the Note 9’s boxier shape is apparent. In any case, they’re very similar, and both look and feel fantastic. 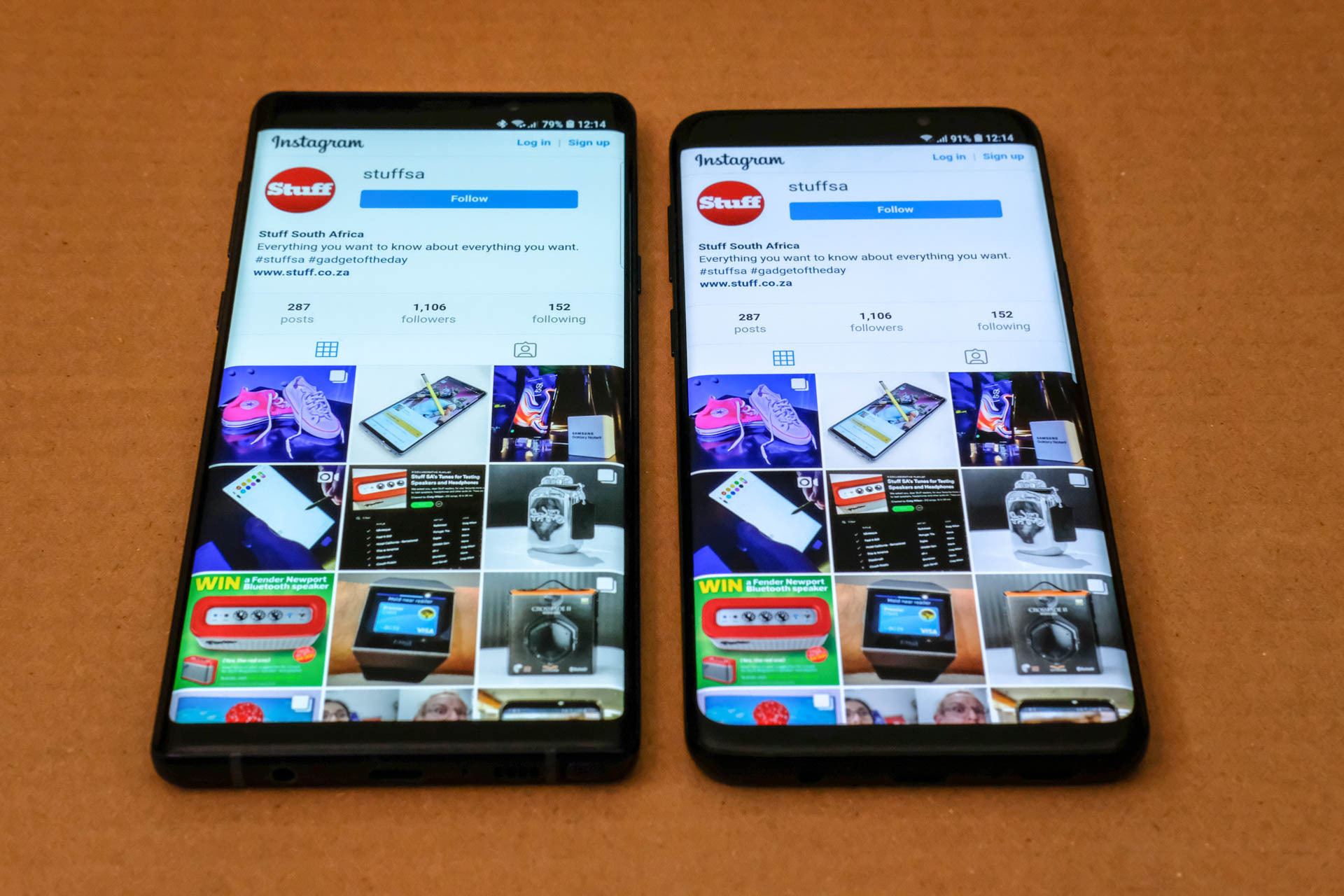 Both of these phones have phenomenal displays — they’re both Quad HD+ Super AMOLED displays, which means they have brilliant contrast and clarity, plus they’re ultra-bright.

The difference is that the Galaxy S9+ has a 6.2in display, while the Note 9 stretches out to 6.4in. That’s slightly more than last year’s variance (since the Note 8 was at 6.3in) but it’s still not much at all. It’s a smaller step than between the S9+ and the standard S9.

Again, the slope of the curves differs quite drastically, but when you’re talking about screen real estate, there’s very little difference between them. Physically, the back camera setups look different on the Galaxy S9+ and Galaxy Note 9 — both have two cameras, but they’re vertically stacked on the S9+ and aligned horizontally on the Note 9.

When it comes to the actual tech, however, they’re seemingly identical. Both have a pair of 12-megapixel cameras, one with adjustable aperture that swaps between f/1.5 and f/2.4 depending on your lighting, and the other with a fixed aperture and 2x zoom capabilities.

Both will deliver pretty excellent results, although the Huawei P20 Pro’s triple-camera setup is the current gold standard with its 3x optical and 5x hybrid zoom, not to mention its brilliant detail in low-light. We don’t think the Note 9 will surpass that, but even matching the Galaxy S9+ would make it a pretty formidable setup.

It could have one advantage over the S9+, though — A.I. smarts allow the Note 9 to optimise shots and change camera modes. It can even tell you when a photo should be retaken. Hopefully they’re all beneficial assets – the P20 Pro’s A.I. mode, for example, tends to overdo the photos. See, both of these phones rock the super-speedy Exynos 9810 chip in Europe and South Africa (and some other places), which delivers fantastic Android performance – and the Galaxy S9+ and the base Note 9 model have 6GB RAM in them. There’s a pricier Note 9 model, however, and that comes with 8GB of RAM.

Honestly, we’re not expecting an obvious difference. The S9+’s 6GB of RAM is plenty to keep things speedy and handle multitasking, and that should be the same on the Note 9. Maybe the extra RAM will help avoid the rarest of bottlenecks or hitches, but we’d be surprised to notice the change.

Battery and perks: Spot the S-Pen This catch-all category shows some key areas in which the phones differ. When it comes to battery capacity, the 4,000mAh cell of the Galaxy Note 9 is one of the best you’ll find in a flagship-level phone, and should keep the phone humming well into a second day.

The Galaxy S9+’s 3,500mAh pack is good for a bit more than a full day, which is plenty for most users, but it’s hard to argue with more uptime. Both phones offer wireless charging too.

As far as storage goes, the Galaxy S9+ comes in 64GB, 128GB, and 256GB varieties. The Note 9, on the other hand, starts at 128GB and then vaults up to 512GB of internal storage with its pricier edition. And both can expand out with microSD storage, with the Note 9 reaching a potential 1TB of total storage if you toss in a 512GB memory card. Both can do a PC-like desktop experience with an external monitor, but the Galaxy S9+ needs the expensive DeX Pad accessory while the Note 9 can just run a USB-C to HDMI cable. Both can fit into compatible Gear VR headsets for mobile virtual reality fun, though.

And then there’s the S-Pen, the true defining difference between the handsets. Do you want a stylus on your large Samsung phone? If so, buy the Note 9. The stylus lets you scribble and sketch as usual, plus new Bluetooth connectivity lets you use it as a media remote and a camera shutter button. If you’re big on on-the-go productivity and will use your phone constantly to whip out emails, scribble down notes, and all sorts of other work-related things, then you might see the Note 9 difference in action. If not, and the S-Pen doesn’t raise an eyebrow, then this becomes a tougher decision.

See, there’s around R3k difference between the base model list prices, at R16k for the Galaxy S9+ and R19k for the 128GB Galaxy Note 9. If you’re going to put out almost R20k for a smartphone, you’re going to get a great device. But for a slightly more boxy design and an S-Pen, we don’t see why it’s priced so much more.

In the end, these phones do much the same most of the time. It really comes down to the stylus and cost, for the most part. So if you’re stuck between options here, have a good think about both categories and see where you land.

We imagine most buyers will be plenty satisfied with the Galaxy S9+, especially if that price difference becomes more pronounced in the coming weeks. But if you’re looking for the shiniest, newest Samsung, the Note is a beast of a device and the stylus adds a bunch of cool features.