What happens if you put a bunch of FPS developers (Treyarch) in a room with a group of Overwatch developers? They create a truly team-based FPS online multiplayer experience. Yeah, the specialists from the most recent Black Ops titles are back, but with more refined, dedicated roles for each of them.

We got our hands on a code for the second beta weekend for COD Black Ops 4‘s multiplayer, and we were pleasantly surprised by the integration of real team-based gameplay into simulated warzones. On display as well were a lot of overeager quick-scopers, scorestreak spammers and useless teammates — as always. Black Ops 4‘s specialists (well… classes) all have abilities that allow them to fulfil specific roles within the team environment — there are support characters, tanks, damage dealers, and even tacticians.

Each specialist has a primary and secondary ability — the first, more basic, ability can be used multiple times in one game (depending on the length of the game) and is not as effective as the secondary ability. The secondary ability might only come out to play once in a game — depending on the amount of kills you get — but these abilities are normally more crippling to enemy players. Their devastating impact is offset by a long cooldown after it’s been used. Here are a few of our favourite specialists and their abilities, based on our time spent with the Black Ops 4 beta.

Firebreak, who returns from Call of Duty: Black Ops 3, drops a reactor core as his primary — the core is a radiation gadget that pushes enemies out of the immediate vicinity, as it emits radiation that harms enemy soldiers. This is especially useful if you are trying to control an objective or choke-point. His secondary ability deploys a flamethrower that can scorch anything within short range. It is super effective/charizard-ish. Crash is a team medic/healer support-type whose Tak-5 ability can heal four teammates at once, even through walls. For his secondary ability, an assault pack can be deployed that provides ammo for other players. Super useful in Heist mode if you’ve run out of ammo and you’re running around trying to outgun someone with your fists…

Nomad, also back from Blops 3, has a a K-9 unit as his secondary, which acts as a scout… and the pupperinos can kill you if you’re not paying attention. Nomad’s less intuitive primary ability is a explosive trip-wire that is fired by a sling-shot. It proves handy if you just want to annoy people. 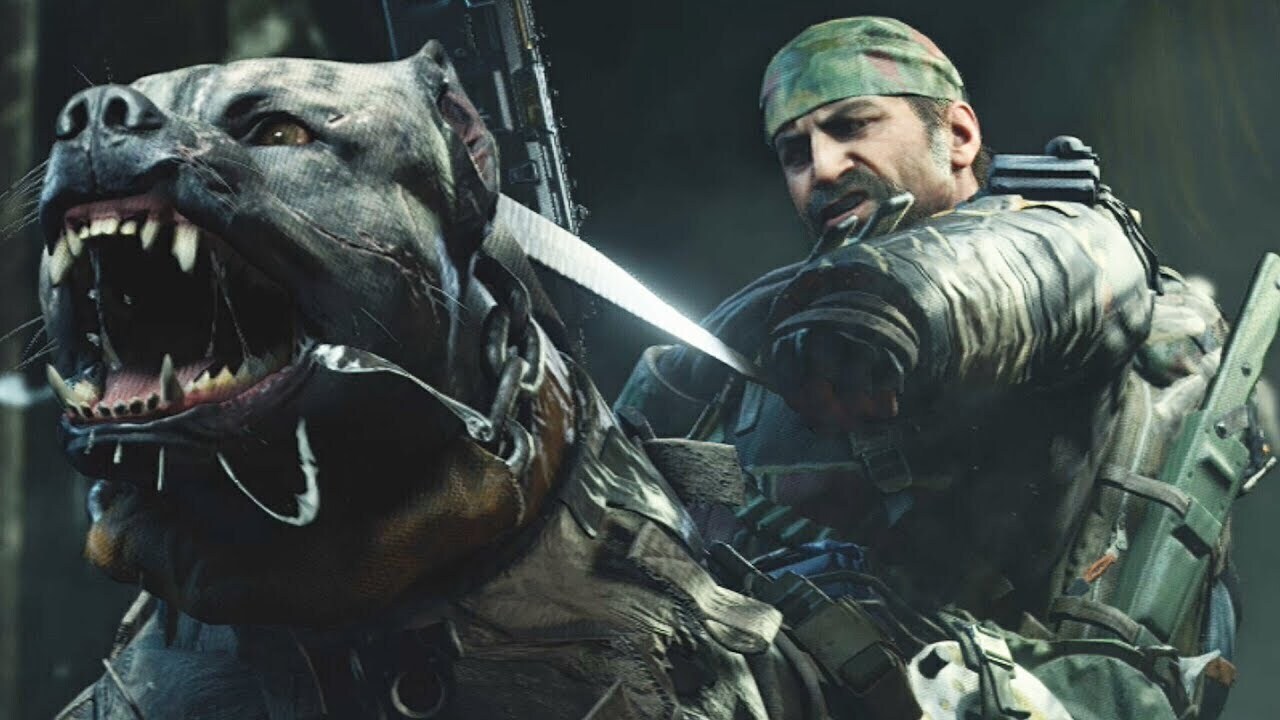 Our favourite support character, Recon, can shoot sensor darts that will give your whole team a mini UAV-like display on the mini-map (which has fog-of-war). Recon’s secondary ability is ‘vision pulse’, that we are familiar with from Black Ops 3 — which reveals enemies in the surrounding area and makes them visible to every member on the team. Yep, that last bit’s new.

Then there’s another familiar face, Seraph, who has a deadly one shot kill revolver dubbed the Annihilator, Ajax who is a tank with a a ballistic shield and a 9-Bang grenade (totally a real thing) that will stun you, Prophet, who fires electrical shock rounds, and Torque, who has razor wire and a barricade that can damage or slow down enemies.

Boots on the ground For anyone who was slightly unsure, this instalment of the Black Ops franchise is definitely boots-on-the-ground. According to lore, it plays off somewhere between Blops 2 and Blops 3, which means they don’t have the exoskeleton, boost jump, wall-running tech yet. A good thing for some…

Many die-hard fans opted not to support the alternating Call of Duty games like Advanced Warfare and the more recent Infinite Warfare due to the fast-paced wall running and boost jumping that characterised their mulitiplayer. Those players will find that their dreams have come true in Black Ops 4, which is firmly in the realm of run-and-gun. Players might find that their wall-run, double-jump reflexes cause a few pointless deaths early on, however.

There were four maps on offer for the beta: Payload, Contraband, Seaside, and Frequency, as well as new addition Hacienda. The maps all feel well-thought out and ideal for ground combat, no matter which of the available game modes we explored. We’re not going to get into the details of each one, but they all have sufficient space for close combat, sniping positions and flanking. Likewise, the game modes on offer (Team Deathmatch, Kill Confirmed, new modes Control and Heist, Domination and S&D) were mostly standard Call of Duty fare — tight and engaging but heavily dependent on how many people on your team are taking the round seriously.

Heist is something a little different, almost CS:GO-like in nature — with a dash of Payday. Opposing teams start with pistols and need to snag some cash from the same central point. The first team to get cash back to their objective gets to keep it — and buy improved weapons, perks and armour for the next round. It gets rough, as you’ve got a single life. If your team-mates don’t revive you in time and your whole team perishes; the floor is left open for the opposing team to grab the cash unopposed.

Our favourite map of the weekend was definitely the Seaside addition — it feels like a Counterstrike map while keeping the Black Ops charm like broken walls and random passages along the side of the map (which are perfect for flanking by the way). Like many local online multiplayer betas, we did struggle to find games for most of the weekend (especially during daytime). This could either be poor servers for South Africa or a case of too few actual players… Other than that, this is definitely a game we’re interested in buying.

We do enjoy playing online against a bunch of people who might take up the game way too seriously. And a few of those who are just there to enjoy the game and shoot some virtual army-men, of course.

We’re expecting another beta in September (this time for the much-anticipated Blackout mode), so don’t delete your beta files if you still have ‘em. Then we’ll see the rest of you on the field in October when Call of Duty: Black Ops 4 officially launches.