We all know that data is pretty expensive if you’re a South African, mobile data even more than most, but Cell C is working on bringing those costs down at least a little. And, to be fair, a rate of less than R5 per GB for an LTE-A contract is… pretty cheap.

Cell C has a new promotional offer running at the moment under their Data Democracy branding, offering users LTE-Advanced access to the internet in three contracts: 50GB/pm, 100GB/pm, and 200GB/pm. As with most of these things, the more you pay for it the cheaper it works out to be. 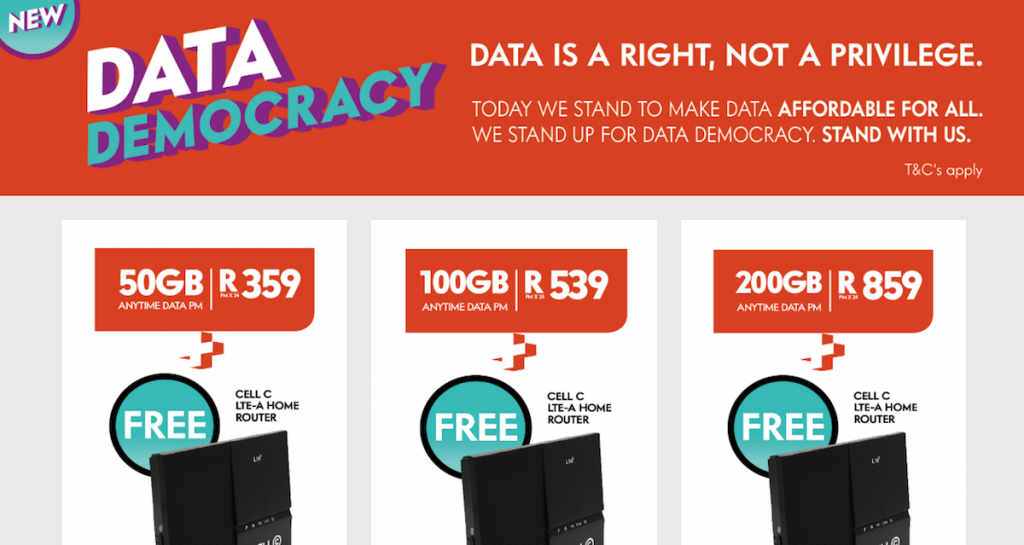 The 50GB per month contract will set users back R359 a month and hinges — like the rest of these contracts — on them signing up for a 24-month contract. If you do, you’re getting your data for R7/GB — which is pretty reasonable. If you opt for the 100GB/R539 per month contract, you’re shelling out R5.30 per GB and if you splash out on the 200GB/R859 per month offering, you’re paying the minor sum of just R4.30. If you remember right, it wasn’t that long ago that we were paying R2 per MB of data…

Cell C is also trying to sweeten the deal by adding an LTE-A router to the bundle — handy for those that don’t have the hardware to turn a data SIM into a home-blanketing quilt of internet. The company says the router is valued at R1,600 and it’ll support up to 32 simultaneous users.

If you’re keen on taking up Cell C’s new promo, hit the link here. If you’re concerned about where you fit in the company’s LTE-A coverage areas, drop by the coverage map first.