You probably never think about the Google Clock app on your Android phone. Unless you are one of those annoyingly-happy early riser types it’s not exactly an app that brings you joy, with its annoying chirps or other sounds that, over time, will create an instant, Pavlovian-like stress response. Seriously, just try playing your phones default alarm tone in the office and watch what happens to your colleagues’ faces.

But that doesn’t have to be the case. No more do you have to be a slave to the tyranny of repetitive default alarm tones. Today, Google launched an update to its Clock app that lets you choose any song or playlist from Spotify to use as your alarm tone.

It works for any Android phone running Android 5.0 (Lollipop) and upwards. If you’re rocking the Android hardware you don’t even need a premium Spotify account to use the Clock update — a free account will do just fine. Sorry iPhonelanders, you’ll just have to stick with the Radar (default) tone — or, you know change it. (But in our experience, few iPhone users change the default ringtone, let alone the alarm one.) 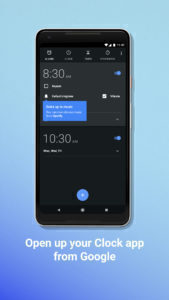 The new feature will roll out globally over the course of this week. At the time of writing, the Stuff team is still waiting eagerly to be able to personalise our waking soundtrack, but if everything goes to plan, we’ll all be able to exit slumber to the soothing sounds of our favourite metal band by next Monday. The hardest thing is going to be choosing which one. Though we are concerned the quickest way to make our favourite band our least favourite is to use it’s music as an alarm.

Usually we would expect Google to use their native music service, Google Play Music, for a feature like this, so we’re not quite sure why they opted for Spotify support. We’re definitely not fighting it though, since Spotify wins in the Stuff office.