If you’ve been missing the largely defunct Motorstorm, a PlayStation-exclusive racing title from the heady days of the PS2 and PS3, you’re probably going to be feeling pretty good about Onrush. Onrush is a vehicular combat title that isn’t what you’re expecting from this sort of game — at least at first glance.

A relic from the past Onrush‘s Motorstorm roots are on full display from the outset. A couple of bikes, vehicles of varying sizes and then some four-wheels tanks are your driving options, and they have a very Motorstorm feel when arrayed in a line, whether on the load-screen or the starting line. In motion the association is even stronger, though this isn’t your granddad’s Motorstorm.

It’s also not his Burnout, either, even if a couple of the game modes make it feel a bit like it is. A Deep Silver-published quad-racing game, Nail’d, also seems to have left its DNA all over the place. There’s a lot of the old days here on a visual and a gameplay level, but it’s how Onrush has arranged things that make the game different from what’s come before.

No rush to the finish For starters, there’s no finish line. You’re never going to want to be out too far in front and you’re certainly not going to want to be too far back. Onrush is built around the idea of bunching up, a great mechanic that keeps gameplay exciting. Most of this is laid at the door of the game modes.

There’s Countdown, where two teams start with the same amount of time and they have to keep that time up by sending as many team mates as possible though gates. When one team runs out of time, the round is awarded to the team that didn’t suck.

Lockdown tasks teams with keeping as many players inside a moving ‘zone’. If you have more team mates in the zone, a clock will tick down. Reach zero and you’ve captured the zone. Capture enough and you take the game. 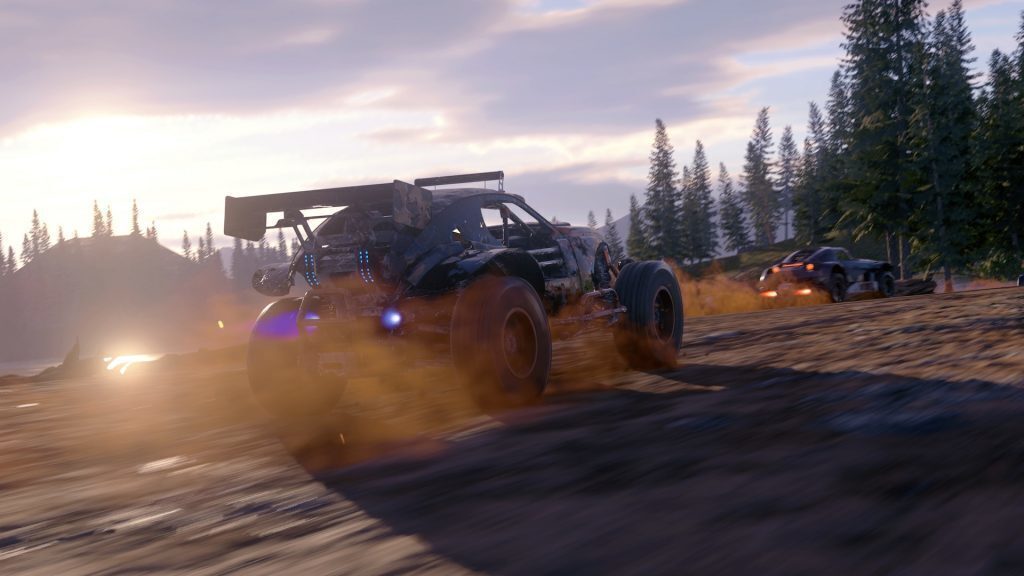 Then there’s Switch, which puts everyone on a motorcycle. Crash, or get taken out, and you switch to a larger car. Lose that one and you step up to the next tier. Lose that one and you’re out of Switches  — you’re not done though, you get a juggernaut and are tasked with making life hard for the opposing team (while protecting your own). When one team is completely out of Switches, they lose.

Finally we have Overdrive, which feels a whole lot like Burnout. Players earn boost during play and can use it at their discretion for a speed jolt. Here, you have to use it. Boosting earns your team points, and the first team to 10,000 wins the round. Cue aggressive driving, full of pushing and shoving — like all the other modes, really. You can also earn points for your team by Rushing.

Team player with a touch of class Rushing is where the Overwatch side of things appears — if you discount the entertaining objective-based game modes, the interface’s colour scheme and even the iconography of the game. Each vehicle, from the two-wheeled Outlaw to the mid-level Charger, the Interceptor, and the hulking Titan, has a special ability, a Rush ability, and a specific way to earn more Rush.

If you’re using the Blade, for example, you can earn Rush by performing back and front flips on jumps. If you crash, the tombstone you drop will temporarily blind anyone who rides though it, and your Rush ability is an insta-wreck trail of fire — perfect for triggering before crossing in front of enemy groups. If you’re in a Charger, you’ll be able to land on top of enemies more easily, you’ll earn Rush by driving closer to enemies, and your Rush attack will let you bulldoze through folks in front of you.

Each of the eight vehicle classes has its own unique set of traits, which allows each member of the four overclasses (bike, light, medium, and heavy) to handle very differently from its immediate neighbour as well as the other seven cars in the lineup.

And then there are the drivers, who are different only in their appearance, attitude, and the taunts that they throw out when seen at the end-of-game recap. The MVP is the coveted spot, and you can get there by taking out the most opponents, adding (or draining) Rush, and hitting the most gates in Countdown. Everyone’s a winner. Except the losers. Onrush wasn’t supposed to be the experience we had with it. The game was shipped with a lootbox mechanic which is still visible today but which isn’t really used aside from the automatically-awarded boxes. There’s no in-game currency you can use to buy them (though you can use it to buy items on ‘special’ that you’d normally have to grind boxes for). But we can tell that Onrush intended lootboxes to be a bigger deal than they are here, because of the random nature of what’s inside them. You don’t make loot random unless you’re setting up for some gambling-style mind games.

As it happens, they’re not being used here much. They’re present, but kinda ‘meh’. Star Wars: Battlefront II‘s user reaction to loot boxes last year has effectively killed their usefulness in any game in any capacity. Our guess is that they were embedded in Onrush before the bubble burst, which is why they’re still here — if largely dormant.

Onrush isn’t your typical racing game. There’s not really any point to being out in front, since you don’t ever actually get to cross a finish line. The comparisons to PlayStation stalwart Motorstorm are justified, in that there’s a specific range of vehicles on offer, but the game has more in common with Overwatch and other team-based objective titles — weirdly.

Still, the gameplay is fun, the cars have been well-tweaked to function with (and against) each other, and it’s something a little different from the genre. That said, Onrush is living between two worlds here and it might not be able to make fans of both racing and team-based combat happy. That’s a shame, because it’s a blast to play in short-to-mid-length sessions.