Technology doesn’t have to be lonely: encouraging dialogue over diatribe 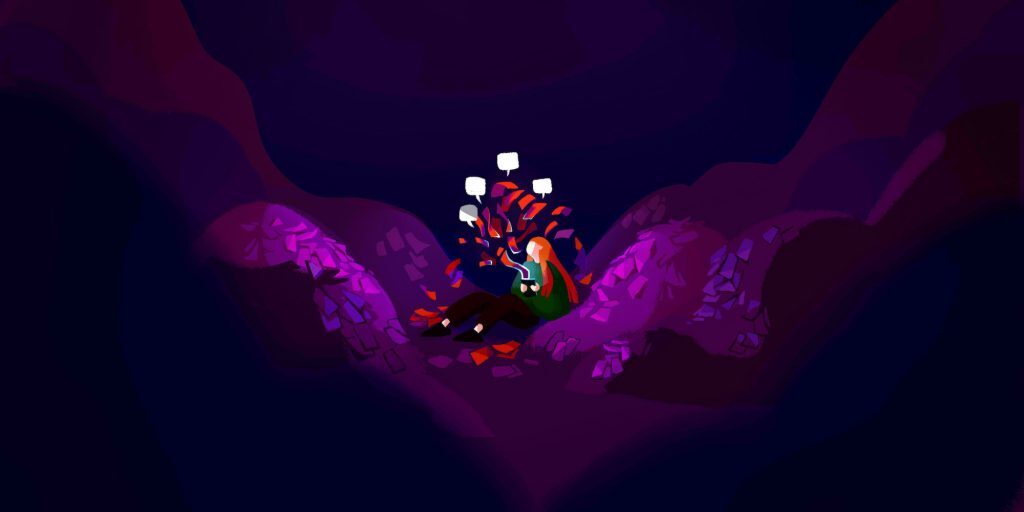 A recent study reported that people are lonelier and more depressed due to technology – and it’s making us feel isolated.

But, while technology is at the heart of it, we believe it’s not technology itself that’s the problem, rather it’s how we use it. Technology can make us feel lonely if we use it as a publishing tool for monologues, rather than to interact with others through dialogue.

And that seems to be what we’re doing.

According to a study from 2016, nearly four in ten millennials spend more time on their smartphones than they do engaging with people in real life. Millennials are defined here as the generation immediately following Generation X, with the first born in 1980.

Another report from 2014 concluded that millennials account for 41% of the total time Americans spend using smartphones, despite making up just 29% of the population.

Indeed, according to data released in 2015 by the Pew Research Center, a nonprofit and nonpartisan think tank in Washington, D.C., more than half of the millenials interviewed said they couldn’t live without their smartphones.

The problem with monologue

So, what’s the problem with this type of technology?

Social media tends to encourage users to publish, “like” and forget, rather than engage in conversation. This is analogous to a conversation that progresses in a single direction: a monologue.

A monologue has only one “logic”. That means there is only one mode of reasoning. A conversation with one logic does not present differing thoughts or arguments, rather it follows a single logical set of assertions that are assumed to be correct.

The word “monologue” is Greek, meaning to “speak alone.” An overabundance of monologue would necessarily lead to loneliness. Sites such as Snapchat, Twitter, Instagram and Facebook are designed to foster a one way conversation, a monologue over dialogue.

They may mimic a kind of conversation, but they are essentially still just a monologue with a chain reply.

Imagine for a moment a parent explaining something to a teenage son and getting “yeah”, “uhuh”, “ok” back in reply. What you’ve got there is a monologue with replies, but not a dialogue.

Much of social media is this type of monologue, even with comments, likes and thumbs ups in the mix. As we all become mini publishers, we are losing the interactivity that fosters meaningful and healthy social interaction.

The positive proliferation of dialogue

So, what’s the alternative to a monologue? A dialogue.

In contrast to the one-way conversation, a dialogue is an exchange of different thoughts, ideas and opinions to reach an agreement – or harmonious disagreement. It is two or more people sharing multiple logics in a conversational setting, just like in face-to-face communication. Dialogic conversations help people feel engaged with others.

While all dialogue is a conversation, not all conversation is a dialogue. Many of us have experienced conversing with an angry parent, where the parent is clearly in a monologue, speaking alone.

For a true dialogue, there needs to be two voices and two logics (hence “dia-logue”). On social media platforms, it’s easier to broadcast a single logic (your own) than it is to engage with a variety of different logics that might challenge your world view. And this hinders true dialogue.

The first step is to realise which technologies foster monologue and why.

Platforms such as Twitter, Instagram and Snapchat are designed for people to broadcast their opinions. Because we are simply publishing, we are losing the interactivity that makes for meaningful and healthy social interaction.

The second step is to realise which platforms are better designed to foster dialogue.

Texting, Skype, and Facebook groups and community pages foster dialogue, helping people develop human connections. For example, a group chat or Facebook community is designed for people to come together to discuss topics of shared interest.

Not everyone holds the same views – logics – but they discuss the topics with the goal of enhancing their knoweldge and ideas through the chat.

If you are feeling an unexplained increase in loneliness, it might be caused by an overuse of monologic platforms. You might consider reducing your use of these platforms in favour of platforms that foster dialogue.

How to leave monologues behind

For example, by constantly sending short, emoticon filled texts that don’t elicit a response. Or repetitively “liking” things posted on Facebook, rather than starting a Messenger conversation with the poster.

It might take time to adjust to a transition from monologic to dialogic interactions, but you will likely feel happier and more fulfilled if you make the change.

Of course, technology shouldn’t replace all human interaction. Whenever you get a chance, you should put the phone down and talk to someone in person. But in lieu of a face-to-face chat, a digital dialogue can make us feel more connected to those around us.