Collecting followers on Instagram has become a lot like collecting stickers in primary school in the 90’s, except now everyone can see your progress. The other big difference is that a high enough follower count could mean social acceptance, humanitarian reach, or even the possibility of being sponsored. Nobody ever offered a 90’s kid a sticker sponsorship.

Sometimes, though, you’d like to delete the creep who keeps leaving unnerving comments on your pictures, or the unruly amount of ‘plus9000followers’, ‘getfollowersquick, ‘buyfllwrsrightnowhere’ accounts who keep badgering you. You’re in luck, or you might be. Instagram is testing a feature that allows you to remove followers.

Until now, the only way to remove a user from your followers list was to block and then unblock them (something called ‘soft-blocking’), blocking them completely, or setting your account to private. Only one of these options really works, and it might seem too drastic a measure for most.

‘Soft-blocking’ is only effective to a certain point, because the blockee might figure out that they’ve been blocked and just follow you again. A blocked user can also easily stay up to date with your life if they search for you through a private or Incognito browser. The only way to truly escape a stalking ‘Grammer is to set your account to private, which in turn can limit your prospective followers. 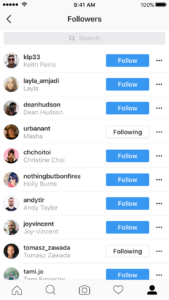 Instagram’s testing out another option — a straight-up follower removal tool. To prevent any awkward ‘why have you blocked me on Instagram?’ conversations, the new feature does not notify the removed user that they’ve been removed, making it a lot more difficult to spot.

The ‘remove follower’ feature is currently an experiment and is only available to a few selected public Instagram accounts on Android.

To check if you have this feature, head to your followers list, and if you’re one of the lucky ones, you’ll see an icon with three vertical dots to the right of a follower’s name. If you tap on this icon, it will bring up a prompt to remove the selected user from your followers pool. Use this new power wisely. Or widely, depending on your circumstances.