Sure it might sound like the world’s largest go-kart (which it is kinda, sorta, related to) but VW’s less-than-eight-minute Pikes Peak climb remains just as impressive as when we were only given the numbers surrounding it. Actually seeing the VW ID R Pikes Peak electric race car ramming its way around corners in a race for the top is something else entirely and gives us a lot of optimism about the future of electric vehicles. You don’t need to poke around in a slow EV if you don’t want to, something we’ve seen with our time spent with the BMW i8 but also confirmed by all the development going on around more high-performance electric vehicles.

Objects in Fortnite are being sucked through rifts… and into the real world? 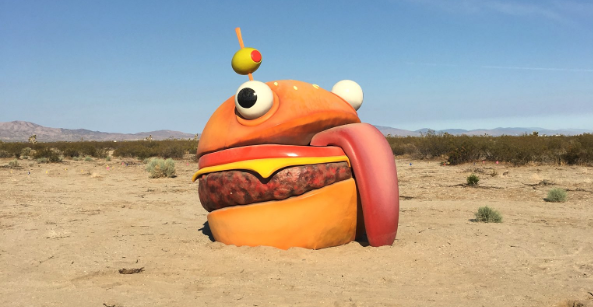 If you’re a Fortnite player then you’re probably aware of the recent in-game rocket launch, which cracked the sky and opened a continuing series of rifts. Some objects have been sucked into those rifts, disappearing from the game entirely. Website Fortnite Intel has been tracking the rifts, and the destruction they’re causing, but it seems the rifts have a taste for signs in particular. One of those signs, the mascot for the Durr Burger, was sucked into a rift over the weekend and wound up out in the real world. Images were snapped by photographer Sela Shiloni, who found the item just sitting out in the desert. It’s obviously some kind of marketing thing from Epic Games but it also makes us wonder… what’s happened to everything else that has vanished through the rifts?

Do not try this at home: This is what happens when you make a Nerf Bazooka

Nerf guns aren’t much of a thing here in South Africa but we’ve at least got an idea what they’re about. Cartoonish guns, with orange caps on everything and bullets made from foam. They’re largely harmless enough, with little risk that you’re going to put someone’s eye out. But when you custom-make a Nerf rocket launcher, load it up with ammo made from some kind of orange end-caps and blue pool noodles, you’re asking for trouble. Of the destructive kind. So let’s look at some of that. A styrofoam head wearing sunglasses, a watermelon, and an old Xbox 360 all meet their end in this video test of a homemade weapon that should probably never be fired at another human being, ever.

BioWare’s recent track record has left us a little nervous — after the tepid response to the most recent Dragon Age and the glitchy Mass Effect Andromeda, we were a little twitchy about their newest title, Anthem. The full presentation from E3, which was shown as part of a hands-on demonstration, has got us a little more optimistic though. The newly-released footage gives us an overview of the mission structure, gear, storyline (kinda), and how the world will function when the game launches next year. See what some four-player co-op gameplay looks like, with commentary provided by the game’s lead producer, Ben Irving. Anthem is set to launch in February 2019.