You are at:Home»News»Phone News»Light is prototyping a smartphone with 9 camera sensors

When one isn’t enough, we want two, and when that’s not enough — three should do the job, but after that we will only be satisfied by nine. Because nine camera sensors sounds exactly like something our overeager world is destined to have in the not-too distant future.

Light, the company behind the wild L16 camera that featured an array of seemingly randomly placed camera sensors, is now building a smartphone fitted with multiple cameras. It features a minimum of five sensors, or a maximum of nine sensors that collectively put out enough power to capture 64MP images (take that Huawei P20 Pro). It’s only in the prototype phase now, so it’ll be a while before we see these guys in stores.

The whole setup isn’t much thicker than an iPhone X, which sounds practical and portable enough for a device with 64MP capturing capabilities. All of the additional sensors are said to increase the phone’s low-light performance and the depth effects while using internal processing to patch the image together. 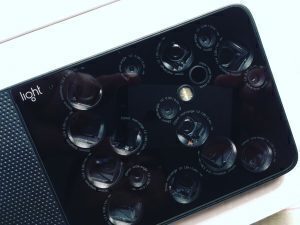 In 2015, Light launched the ridiculous L16 camera priced at $1,950 (approx. R26,700) although it was only available commercially in 2017. The L16 uses 16 lenses to capture 52MP pictures and it looks as portable as something bearing a massive amount of hardware could look — the device can apparently fit into a pocket with ease.

We don’t know much more about the new Light phone other than the camera specs (obvs) so at this stage it is unclear when it will be released, how much it will cost and whether we’ll ever hold one in our own hands. We would like to though — and we’re pretty sure any other camera junky out there wouldn’t mind a go with it either.