The streets of 1918 London are not a safe place to be, whether you’re a citizen, a gang member, a vampire, or a vampire hunter. As it happens, you’re Jonathan Reid, a doctor and newly-turned vampire who has to unravel how he came to be a blood-sucking monster. You’re also a major reason why the streets are unsafe, along with the outbreak of the Spanish Flu epidemic. Welcome to the wonderfully dark world of Vampyr.

First do no harm You wake up in a very unpleasant situation, one that we’ve seen in games before. Few manage to make it seem as claustrophobic and terrifying as Vampyr does, however, but the shock of awakening is quickly overshadowed by tragedy and then fear as armed men take after you. Coming back from the dead as a vampire affects some people that way, apparently.

Once an escape has been made, players will walk, run, teleport and bite their way through the events of Vampyr. The main game mechanic is unusual – you’re tasked with healing people in your role as a doctor, but keeping NPCs healthy can have a sinister motive. You want your prey to be as healthy as possible before you consume them, since you’ll be rewarded with more XP.

Or you can take the really tough way and slog through the game on the XP rewarded by completing quests, defeating enemies and completing other, non-deadly goals. Vampyr makes you as much of a monster as you desire but it doesn’t make it easy. Even a seemingly compassionate choice can be the wrong one, sending a region of London spiralling down into chaos. You can also choose to do this, by killing everyone you come across.

People are their stories But Vampyr doesn’t make that easy, either. The overall story, as well as the individual tales spun around NPCs, is compelling and is easily the best part of the game. You’ll be happiest when politely conversing with targets… um, people, about what’s ailing them. Narrative, one of developer DontNod’s strengths, is what will draw you in and keep you hooked.

The story isn’t alone. The gloomy nighttime atmosphere that is crafted around every one of these individual tales, is ripe for exploration. Walking into a new area gives off a sense of trepidation — you’re not always sure that you’re fully ready to take on what’s next, not something that we’ve seen effectively implemented in a vampire game in ages. Is it a great idea to enter the house you just heard screaming from? Did you bring enough healing items? How long as it been since you last saved? Are you going to go anyway? Yeah, probably. The setting is dark and suitably gothic, when it isn’t being scary — we kept on thinking we were going to encounter Jack the Ripper around every next corner.

Not a total apex predator 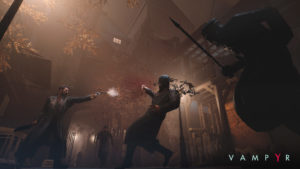 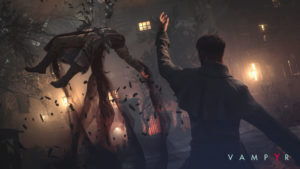 The narrative and setting being as good as they are is a positive thing, because you’ll find that the other systems in Vampyr aren’t as refined. Load times, when they happen, take far longer than you’d expect from a game of this sort. There are occasional lip sync issues, but you’ll have to be really looking for it to find them.

The biggest headache comes with combat and the camera. Combat can be janky, with control – especially in situations with multiple enemies – being very frustrating. The camera doesn’t co-operate and Vampyr isn’t really set up to allow you to take on groups of enemies. It’s all too easy to be stun-locked until you’re overwhelmed, ruining the illusion that you’re an all-powerful night-walker out for blood. Unless you’re playing that way on purpose by not killing any of your patients…

Players have various skills at their disposal, from healing to offensive capabilities, but it’s when using those that you’ll encounter their limitations. Using blood, a consumable resource, to heal or attack has a significant lag — it’s easy to die before your skills take the edge off. Using melee weapons, guns and shotguns, and medical vials in conjunction with your vampire abilities is almost a must. A combination of everything you have makes combat bearable but we remember how well DontNod did combat with Remember Me. This could have gone better. Make no mistake, Vampyr has its faults, though none are severe enough to make your experience a wasted one. The tale is enough to keep most coming back and over time (and with a little forethought) the control difficulty can be overcome as well. The story of Jonathan Reid and his time spend in the darkness, either helping all and sundry or consuming everyone you come across, is well worth playing. All that’s left to decide is: Who kills more — you or the flu?