Chinese smartphone manufacturer Oppo, which is one of Huawei’s largest competitors, has just announced its newest handset — the Oppo Find X. And we want one. The trouble is, we’re going to have to go to Europe to get one. But it might be worth the trip, especially if you a) have the cash to burn and b) are a Lamborghini fan. In addition to announcing the standard Find X (pictured), Oppo has also revealed that there’s a Lamborghini version of their newest flaghship smartphone on the way. You might recall that rival Huawei recently unveiled the Porsche Design Mate RS, complete with attendant mad price? This is Oppo’s answer to that.

The difference between the two handsets is considerable, though almost none of those differences are internal. They share the same massive screen, which crams in more pixels (and maintains clean lines on the rear of the device) by making the cameras a pop-up affair. Think a mini-slide phone, where the cameras slip back into the main body. and you’ve got the idea. 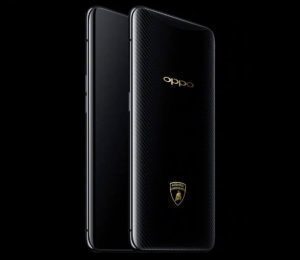 Both phones will come with Qualcomm’s Snapdragon 845 processor, 8GB of RAM (so much for subtlety), 802.11ac wireless support and Bluetooth 5.0. The Lambo device also has a carbon fibre body, the iconic badge, and 512GB of storage. The base phone only has up to 256GB.

And, like its namesake, the Oppo Find X Automobili Lamborghini Edition is fast. Very fast. With regards to charging, that is. The standard Find X uses VOOC wireless charging, which gets its 3,730mAh battery full in a little under two hours. The Lamborghini Edition is the first smartphone to pack in Super VOOC tech, which will crank a dead 3,400mAh battery to max in just 35 minutes.

As far as price goes, since you’ll have to travel to Europe to get one we’re going to go with ‘considerable’. The standard phone will cost the local equivalent of around R16,000, while the Oppo Find X Automobili Lamborghini Edition will set you back closer to R27,000. And that’s not including plane tickets to Paris and back.

Oppo’s Find X will be launching in August this year. The more expensive handset doesn’t have a release date just yet.