It was quite an experience arriving at the South African Sennheiser showroom only to see a gigantic screen welcoming us on our tour of the facility. Which made us feel rather VIP-like… and a little guilty that we originally wandered in the back door, where there’s a full-scale manufacturing operation. We were met by James Futter who, along with Mitech Direct’s Rodger Reeks, took us on a tour of the entire operation. It is… extensive. Sennheiser SA lives inside the Mitech Direct Experience Store in Midrand, Johannesburg. The large facility is a temple to sound in all its forms, with everything from Bluetooth speakers and musical instruments to DJ and concert equipment housed under a single roof. Sennheiser’s main listening room — which contains a demo Ambeo 3D audio system and the company’s absolutely bonkers HE 1 headphone setup (the updated Orpheus, which was sadly absent for our visit) — is a literal Sound Temple. 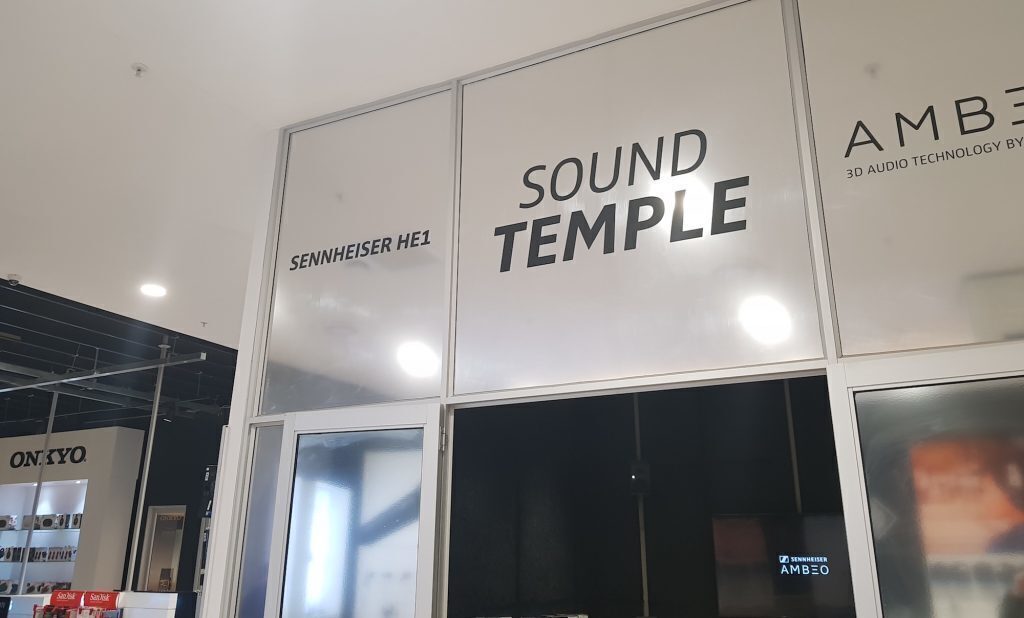 It’s the place where you go to test out a home speaker system that requires an $11,000 deposit before a consultant will call you to discuss installation options. It’s the place where you’ll test out a pair of R19,000 headphones before taking them home and adding them to your insurance immediately. That’s audiophile heaven, but if you’re just serious about sound, any of the immediate surrounds will keep you smiling. 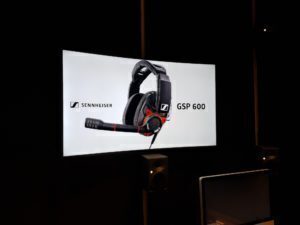 Drum lessons are available but we’re prefer to just annoy the neighbours. The main controller for the Ambeo 3D audio system

Sennheiser’s entry level to enthusiast kit is all available to play with, though some of their wireless workout ‘phones are unavailable. That’s fine, sharing those would be icky. The German company’s wired and wireless cans are on display everywhere. In some cases you can just connect a trailing audio jack to your mobile device, but the highlight is an interactive touchscreen table designed to show off the pricier of the sub-audiophile range. Sets of headphones are arranged around a long rectangle, giving you information about the hardware you’re fondling while letting you control the experience with your digits. All of your sound controls are operated by the multitouch surface, which supports several users at a time. There’s DJ kit everywhere you look — and the means to use it, too. Okay, at this point we may have gotten VERY distracted. Most of the stage components seen here, from the scaffolds to the stage surfaces, are made on-site.

Whatever your sound desires, though, Mitech’s Experience Store has you covered. We passed by the Bluetooth speakers section (but not before being snagged by a shelf full of shiny Sonos speakers) because of the bright and beckoning rows of guitars lining the walls. Violins, drums, trumpets and other instruments take up about half the available space in the main corridor. But then there’s the other room… Most of the stage components seen here, from the scaffolds to the stage surfaces, are made on-site.

A room which could double as a lovely little concert venue. Well, a rather large concert venue. What’s most impressive, aside from the millions of rand worth of audio kit just lying about the place, is that most of the stage has been made on-site. The stage scaffolds and surfaces, as well as the speaker casings, are constructed on the premises and, occasionally, shipped overseas for sale — provided locals haven’t ordered them.

If we’d gone with an unlimited credit card, Stuff‘s trip to Sennheiser and Mitech’s Experience Store could have proved expensive. A pair of Sennheiser HD 800 cans would have been just the start — a guitar or two, some amps, speakers, a TV and enough streaming gear to start our own DStv channel could have made it onto the shopping list as well. We wouldn’t have had to break the bank, though — there’s also plenty to be had for those on a budget. You don’t even need to go into the store, either. Everything on the premises is tracked in real-time on the online version of the store so you can bankrupt yourself from the comfort of you couch.