iOS 12 wasn’t the only thing that Apple showed off to the world last night — there was also a first look at the company’s newest desktop operating system: macOS Mojave. Or, if you want to be quite dry and specific, macOS 10.14.

But what does the new OS entail? We’ve got a rundown of the best incoming features here. 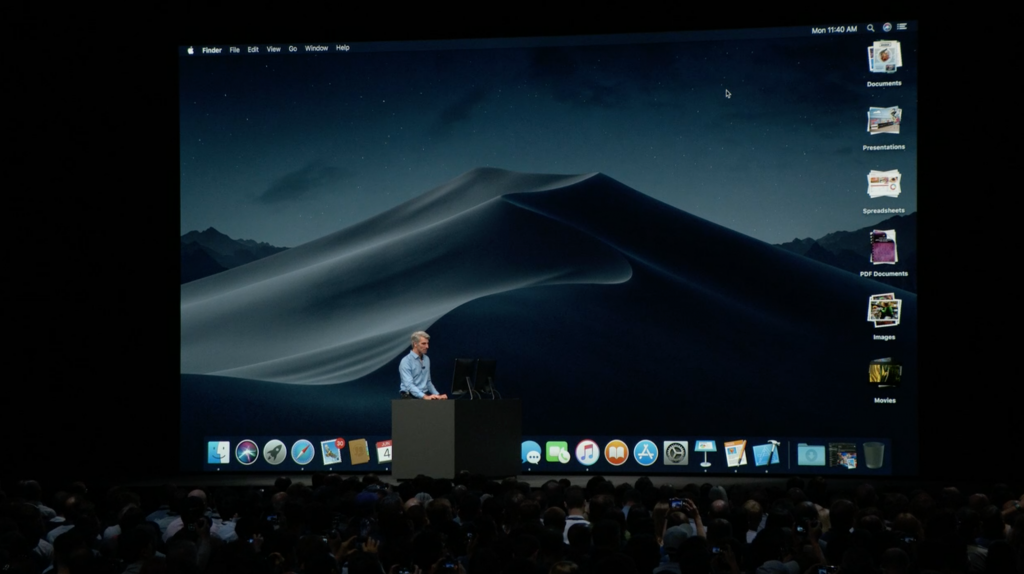 The first, most obvious, and perhaps most useless change is in the name. We’ve moved away from beaches with improbably large waves and mountainous features to something a little hotter. During the day, that is. 2018’s macOS has been given the moniker Mojave. It is going to be fun to see people who have only ever read the word ‘Mojave’ attempt to pronounce it. Maybe we can ask them to say “Would you like some jalapeños on your fajitas in the Mojave?”

On to an actually useful change, Apple is introducing a new Dark Mode which has already sold us on the new OS. Apple could have stopped here and we would be still been keen on macOS Mojave. It’s little more than a dark grey theme for Apple’s machines but it should prove easier on the eyes than staring at large amounts of white all day. If you’re coding for a living, you’ve probably already gone looking for a download for the Developer Beta that’s out already. Does Dark Mode do anything else? Nope. Does it have to? Also nope. Is it coming to iOS 12? Tragically, nope. Maybe next year. Stacking up: It’s not just for SWAT teams any more. Apple’s making those untidy desktops, the sort that give Stuff‘s art director massive facial tics, a thing of the past with a new stacking feature that will take the scattered mess that is your desktop and sort everything into neat little piles. All the JPGs in one pile, all the misnamed folders in another, perhaps another pile for Word or Excel docs as well. You’ll be able to scroll through each pile when you need something and anything new will just jump into the correct stack when you drop it on your desktop. Again.

If, like us, you’re more wary than ever about your digital security then macOS Mojave will be a welcome sight. Apple is bringing iOS-like controls to the new desktop system which will clue you in on what an app is using and what it wants to access. You’ve seen this a whole lot before, on mobile device when installing and starting a new app. Apple’s just bringing it to the desktop, because perhaps you should know that Evernote is looking for your GPS location this time around.

Privacy is also being baked into the Safari browser, meaning that we might actually open it this time around (for more than just downloading Chrome). The ability to stymie web tracking, even up to the likes of Facebook’s persistent efforts, is something that Safari wants to get right this time around and Apple will also be disguising your Mac so it looks a lot like all of the others online. The result? A less complete digital footprint left behind for advertisers to profit from. Several standard apps are getting updates as well. Finder is getting a new gallery view, which you might be familiar with if you’ve been a Windows user from… 1998 onwards. Still, Mac has it now, okay? You’ll also have greater control when editing files and especially screenshots, and Apple’s Books (formerly iBooks) and the App Store are getting an upgrade, too.. Apple’s News, Stocks, Voice Notes, and Home apps are making the jump over from iOS this year as well. Because reasons. Will we see Apple News in South Africa, sadly probably not. Maybe one day.

Want to know whether your Mac is going to be able to get a taste of that sweet Mojave  desert? Since the Developer Beta is out at the moment, that information has appeared online. Basically, if you’re rocking a mid-2012 Mac onwards, you should be covered. Mid-2012 MacBook Air and Pro models will be supported, late-2012 Mac minis and iMacs likewise. MacBooks from 2015 on and the iMac Pro will definitely be able to install Mojave. If you’re driving a mid-2010, mid-2012, or late-2013 Mac Pro with a Metal-supporting GPU, you should also crack the Mojave nod. If you’re not on this list though, it’s perhaps time for an upgraded machine.