Is it an iPhone X? Is it a Galaxy S9? No! It’s the new flagship in a series that you didn’t expect would make it this far. It’s the LG G7 ThinQ, set to come to South African shores in June.

For the last several years LG has produced some adequate smartphones, but its smartphone portfolio has flown under most consumers’ radars.They cannot compete in the big leagues with Apple and Samsung (and now Huawei) in terms of marketing and customer preference. This has meant the competition has overshadowed LG’s smart devices (excluding TVs, fridges and washing machines), resulting in unprofitable sales numbers which in turn forced LG to change its smartphone strategy.

The LG G7 ThinQ is the first product of that new strategy. Can it garner the attention LG requires or will it suffer the same fate as previous LG headliners?

Design & Display: Do A Double Take The G7 clocks in with a 19.5:9 aspect ratio screen, making it very narrow and long — think of the Samsung Galaxy S8/9 format. It also features a notch which can easily be hidden in a fake bezel in the ‘second screen’ settings. You’ll find the setting under New Second Screen in Display Settings. It’s not a second screen, LG.

The build quality feels superior to the V30, with glass panels on the front and back and an aluminium rim around it just to give it that sturdy feel. Although covered in glass and metal, it still has the necessary grip to assure it’ll stay in your hand snugly — probably thanks to the smaller and thinner size adaptation, which is what gives the G7 ThinQ a very S9-esque look.

Bezels around the display are minimal, but the bottom bezel is still quite large — it’s a ‘could’ve boasted a home button’-size. At the back there’s the expected double camera sensor and fingerprint reader, with the comfortable back fingerprint reader that we had on the V20 and V30 returning. It’s in the spot your index finger rests on naturally, so there is no blind searching for that damned sensor. The unlock button has shifted from a clickable fingerprint sensor to a right-hand side physical button — another feature that reminds us of the good old Galaxy S9. On the other side you’ll find the volume rocker, along with a dedicated Google Assistant button (which mildly reminds us of the dreaded Bixby button), which hasn’t caused any unnecessary headaches just yet.

LG’s phone displays are getting bigger and brighter with each new interation, and the G7 ThinQ is no different with its 6.1-inch IPS LCD that has a crisp 3,120 x 1,440 resolution. A trusty always-on display will keep you posted on the time and notifications while not draining much battery. LG has also incorporated a feature called Super Bright Display. The phone is capable of going up to 1,000 nits because LG has added a white subpixel to the standard RGB subpixel arrangement to boost brightness. This can be enabled by tapping the toggle next to the brightness slider, allowing the screen to go beyond the slider’s maximum luminosity. The feature is especially useful in direct sunlight, something we Saffers contend with often. Battery life on the 3,000mAh battery is good but not as impressive as the rest of the competing devices in its class. Even last year’s G6 had a bigger battery. Regardless, the G7 ThinQ can last a full day depending on use. It’s not going to get you into the late night hours without a recharge unless your usage is kept fairly light. If you’re a big mobile gamer or you stream a lot of content, expect to charge the G7 ThinQ at least once throughout the day. With the LG G7 ThinQ, LG has continued to put a big emphasis on audio. LG’s signature quad DAC is back again, providing higher quality sound, less distortion, less noise, and better dynamic range than the average smartphone. The DAC is a feature that owners of high impedance headphones will greatly appreciate.

The G7 ThinQ’s single bottom firing speaker might be one of the most interesting developments. Single speakers usually aren’t worth talking about, but this one uses the space inside of the phone as a resonance chamber. You can feel vibrations from the sound moving through the phone as you listen to music or watch a video and setting the phone in or on a hollow container or any ordinary hard surface will amplify the sound.

The phone also features a microSD slot for extra storage and IP68 dust and water resistance for that added peace of mind should your device get wet (or dusty). Selfies are hella important (because you can even open banks accounts with them now), so LG has finally upgraded its front-facing camera. We kind of miss the wide-angle selfie feature from the V-range, though.

The G7 ThinQ has an 8MP front-facing camera. The extra resolution makes a huge difference in detail, sharpness, and provides more room to crop your images. The colour reproduction is a bit on the over-saturated side, throwing out the natural tones that you would get on the Google Pixel 2 for example, for over-sharpened, over-saturated tones. Usage really depends on what effect you would like to achieve.

LG also added portrait mode into the G7 ThinQ — a first for LG phones. It’s a great addition if you want that artificial background blur for a more professional look, but it isn’t perfect. There were times where it bled into the foreground, blurring out parts of my hair, glasses, or my ears. In most situations, though, the blur was convincing. Portrait mode results on the rear camera felt more consistent, as it did a better job separating complex subjects from the background. This is likely due to two cameras being used to achieve the effect instead of relying on software, in the case of the front camera. On the rear, the LG G7 ThinQ utilizes LG’s signature standard and wide angle lens combo, which is awesome considering no other flagship offers this feature. Competitors rather focus on bokeh effects (iPhone X), and super night-mode (Huawei P20 Pro). Both of LG’s sensors are 16MP, which means that there’s no longer a loss in resolution when switching sensors. The main sensor is still the superior lens when it comes to quality.

The main benefit to the wide angle is, of course, fitting more into the frame — it’s great for landscapes or group selfies. The wide angle has been reduced to a 107-degree field-of-view from previous generations, but this has eliminated the trippy barrel distortion on the edges of photos. 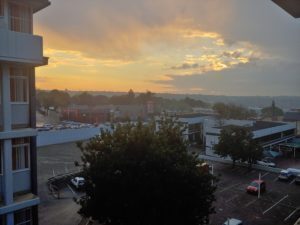 The camera will be the least of your concerns when opting for the G7 ThinQ, sporting some  DSLR-like manual controls for both photo and video, with Cine-log being the only notable feature missing. This looks to be reserved strictly for the V series for the time being, but LG has brought over the AI cam first introduced on the V30S ThinQ.

This is one of their main selling points — the AI built into the camera, which isn’t very ‘intelligent’ at first glance. The normal AI feature tries to sense what you are taking a picture of and calibrates the settings accordingly. It has suggested we’re taking pictures of swimwear while aiming the sensor at a table, which is strange. LG’s phone is also one of the first handsets to sport Google Lens, which is much more intelligent when sensing the environment.

You can’t argue that LG is pushing hard into the top flagship market, but this handset feels… not quite ready. We’ll argue that they are on the path at this point and we’re intrigued to see what they’ll bring to the table with the upcoming V40(?) handset. The V-range tends to be the handsets that new tech gets tested on, while the G’s are well-rounded phones featuring the best of what they have found works for consumers.

There isn’t really anything to hate on here, except the fact that the handset feels a tad gimmicky (cue the notch, S9-esque design and faulty AI cam). The camera is great, the software is smooth and the LCD screen is bright and beautiful. If you’re looking for a flagship phone and want to support the underdog, this is your handset.