Ah, dreaded notches — can’t live with them, and can’t squeeze front-facing cameras into almost edge-to-edge displays without them. Unless you’re Vivo, which used a pop-up camera in the edge of its concept Apex handset to get around this problem. Now Chinese hardware maker Lenovo, which owns Motorola, has teased its own take on a bezelless, notchless phone.

Every big-name smartphone maker is trying to maximise smartphone screen real estate, and until now the only ways out have been adding a notch like Apple, Huawei, LG and countless others have done, or settling for super-slim bezels like Samsung’s done. Perhaps there’s another way, though. Lenovo VP Chang Cheng recently shared a concept image on Weibo (or ‘Chinese Twitter’ as its known, though probably not in China). It features a design of what could be the next Lenovo handset.

Dubbed the Lenovo Z5 in Cheng’s post. With its rounded corners and nearly full-face display along with the wallpaper in the picture below, there’s no denying the similarities to the iPhone X… albeit without the much-maligned notch, and although this is only a concept, we can’t imagine someone so senior would share a concept if there was no chance of it becoming a reality, so we’re going to treat this as the hype it seems to be. 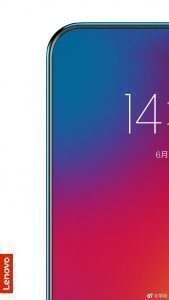 Cheng’s teaser post says (according to Google Translate) that the Lenovo Z5 is the company’s new flagship phone. Besides that, the post leaves things pretty vague. He previously shared a different teaser for the Lenovo Z5 featuring a photographic concept, and claimed that it had a 95 percent screen-to-body ratio. Even though we’ve only got a partial picture of the handset here, it’s enough to get us excited.

We don’t know if the Lenovo Z5 is in production now, or merely a twinkle in Chang Cheng’s eye. We are, however, pretty excited to see where Lenovo hides the front cameras and other sensors, all vital hardware for flagship devices. The best iteration of a notch on an android device so far has been the Huawei P20-range, that sports a notch that can actually be hidden with a black bar by the user, but has far fewer sensors and other bits than Apple’s star player.

One thing we can be sure of, the battle for bezelless beauties isn’t going anywhere. According to Cheng, in his now infamous post translated by Google, “four technological breakthroughs” and “18 patented technologies” will be used to create the the Z5. Hopefully we’ll see some breakthroughs that’ll bring us closer to glass-only hologram smartphones. Come on Lenovo, we believe in you! Alternatively, we’ll settled for notchlessness.