There was a time when getting a new phone meant wrapping it in a handkerchief and carrying it around like a newborn until you could get to a store to buy a case. These days Samsung pops a basic, translucent protective case in with its top-end handsets, which will suffice for some owners, but with so many excellent, official accessories on the market we’re inclined to think of the supplied option as more of a stopgap. These are some of the finest accessories for what we suspect is going to turn out to be one of the finest phones of 2018. 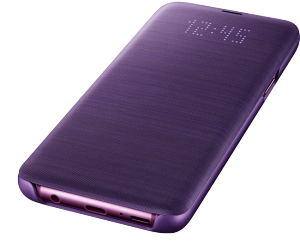 There are three main variants of cover in Samsung’s official accessories lineup. The first, and arguably fanciest, is the LED View Cover that harnesses the Galaxy S9’s always-on display to show you the time and — if you so wish — notification icons through its front flap. That flap is going to be controversial, though. Some people love a wrap-around cover, others loathe them, but there’s no disputing they go a long way to protecting the display and help keep your phone in pristine condition. If you’re a flap fan, you can expect to pay around R1,190 for the LED View Cover from Samsung stores or mobile operators’ stores.

The new S9 range of devices is ideally suited to media consumption on the go, from the curved edges and minimal bezels of the Infinity Display to the impressive resolution and support for HDR content. Of course, propping your phone against the sugar bowl while you make breakfast is also a surefire way to welcome calamity, which is where the Protective Standing Cover comes into its own. Priced at R800, it offers military-grade drop protection for your pocket movie theatre along with a kickstand for easy viewing.

More into svelte and tactile covers? There are two to choose from. The Alcantara cover looks and feels like the suede of a luxury car, while the HyperKnit cover looks a bit like you’ve wrapped your phone in a cutting-edge running shoe or cross trainer. Those will set you back around R640 a piece. With the Galaxy S8 Samsung introduced the DeX Station, a dock that lets you connect your phone to a monitor, keyboard and mouse and turn it into a portable desktop computer. The new DeX Pad is the updated version of that idea. Now you can use your phone’s display as a trackpad and lay it on its back for notifications at a glance that won’t interrupt your workflow. We haven’t had local pricing for the DeX Pad yet, but expect it to be in the R3,000 range, going on the pricing of its predecessor. Of course, the DeX Station remains a solid choice, too, and we might see the price of it fall in light of the Pad’s arrival. Of course, if you’ve already got a capable desktop computer the DeX Pad may be overkill for you, but you may still want to consider a Wireless Charging Stand for either your desk, your bedside table, or both. Simply pop your Galaxy handset on the stand and it starts charging immediately. Lay it flat or prop it up and simply pick up your phone when you need it. Now you can stay connected while also staying fully charged. But start with the box

One of the best and least-talked about accessories for the new Galaxy S9 handsets comes in the box: the supplied earphones. Generally, supplied earphones are uninspiring and offer middling performance, but Samsung’s earphones are tuned by AKG for crisp, immersive and detailed sound along with a comfortable fit thanks to an enormous amount of time, effort and research spent making sure they’ll fit any earholes snugly.