While everyone is busy flipping out over convertible laptops — Toshiba is busy building some high-spec business laptops that should have enough jump in their step to keep up with Dell and HP.

That’s what we expect from Toshiba, and the review unit we received runs an Intel Core i5-7200U processor and comes with 8GB RAM. Which should be enough to keep up with general day-to-day office-bound work and the odd bit of digital nomad cofficing.

With Dell, HP, Lenovo, Asus, Apple and others all looking to dominate this highly desirable sector, what makes the Toshiba Tecra X40-D-10G special?

Business in the front and… no, business all round

This laptop device looks classy and sleek — coming in at only 1.25kg, the magnesium casing is 16.9mm thick and comes in a deep blue black that has a slight tinge of the midnight sky.

The colour scheme is decidedly dark, except for the metal hinges at the back, which only allow the screen to bend over to around 45 degrees. This is no convertible, but then, it’s not meant to be.

Underneath the lid we find a traditional laptop layout which includes a centralised touchpad — a SecurePad design with an integrated fingerprint reader in the top left corner. The fingerprint reader is wonderfully speedy and responds to a touch — no swiping necessary. The keyboard is a good size, and benefits from a very positive action and very bright backlighting. The only issue we could find here is that the trackpad picks up a lot of fingerprints that are hard to remove. 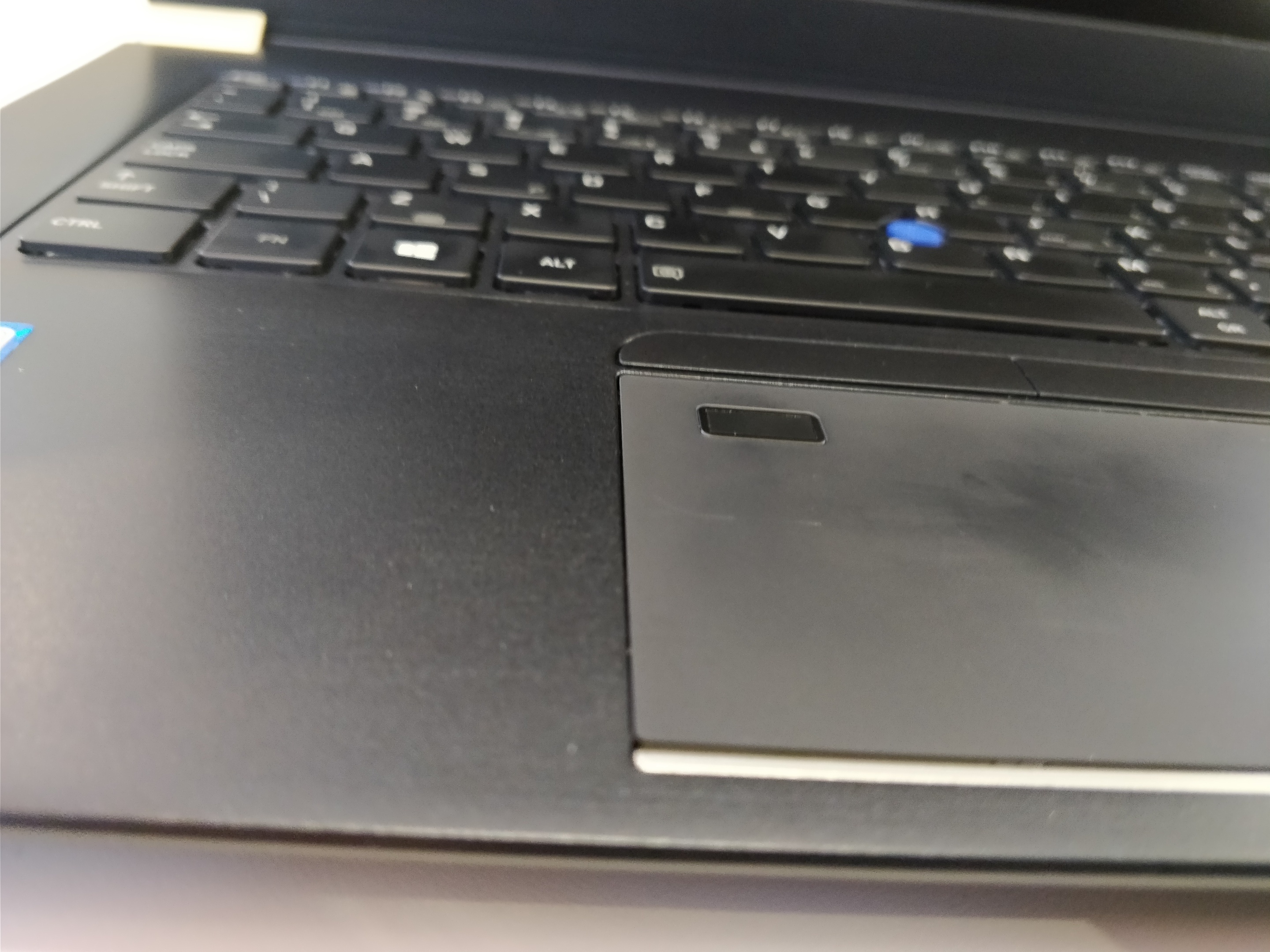 The 14in, 1080p non-reflective touch panel occupies most of the inner lid, with pretty large bezels all around — especially at the top, making space for an infrared camera for facial recognition along with a dual microphone for the nifty Windows Hello and Intel Authenticate, as well as a conventional webcam.

Along the sides you will find a total of three USB-ports — of which only one is the trusty type-A on the left side, the other two are USB 3.1 Type-C Gen 2, and are located on the right side. The setup also includes a microSD card slot, a full-size HDMI port, a Kensington lock point and a headphone jack (thank goodness the trend for ditching them hasn’t caught on for laptops yet).

But wait, no LAN port? This is definitely a very strange omission on their part — seeing that this machine is aimed at the business market. Obviously many offices run solely on WiFi, but many still swear by being wall-connected — is the timing off? Or is Toshiba leading the way for all-wireless all-the-time?

You can use the Toshiba Thunderbolt 3 Dock (get it for around R4,000) to expand your port arsenal so it includes a LAN port — a big price to pay for an extra port though. It feels like everyone has been rambling on about securing your data non-stop lately, but its an important topic. The Tecra X40 D 10G is outfitted with the latest security BIOS features from the folk at Microsoft and Toshiba.

The device’s two-factor authentication used the aforementioned IR-based Windows Hello and the fingerprint reader, so even if you have an identical twin they shouldn’t be able to unlock this laptop.

On first glance Windows Hello will scan your face for facial recognition, and if you do not pass this step, there is the option for a fingerprint scan, and if this doesn’t work, there is a password (like conventional laptops) to get through — if it still doesn’t work, this is not your laptop and you should return it to its owner.

To beef up the security, Toshiba has included slimline security lock slot and magnesium chassis that has a (bee)utiful honeycomb design for physical strength and security. So it won’t break down like your old Toyota Corolla did last week… The backlit keyboard is a pleasure to use — it’s bouncy and responsive with large, clearly marked keys. Then we have Toshiba’s characteristic AccuPoint stick that sits between the G, H, and B keys and can be used with the conveniently placed buttons at the top of the SecurePad. The keyboard configuration just feels comfortable, and we could definitely use it for long periods of time.

Toshiba uses a new hybrid air cooling system in the Tecra X40 line. This system has two inlets to pull air in, and when the fan activates, two vents located at the back edge of the base push out a fair amount of hot air. Their positioning is a bit awkward: they are somewhat blocked by the lid, and the area behind the keyboard becomes warm, as does the back of the base, but not so much we found it alarming. Just be prepared for things to heat up if you’re pushing the processing power.

The specifications sheet claims 11.5 hours of battery life, but we found it ran down quicker than we’d expect from a business-oriented device under regular use (browsing, word processing, not much else). We’d guess you can expect around six hours, depending what you’re doing with it of course, so if you’re out on the road a lot you’re going to need to have your charger close at hand. The Tecra X40-D is fitted with an Intel Core i5-7200U processor, which is acceptable for a notebook of this calibre. It’s in line with the Lenovo Ideapad 320-15fhd notebook and the Dell Inspiron 3567 — both of which retail at a fraction of the price of the R22k Tecra X40, and have larger displays, coming in at 15in and 15.6in respectively.

It also has Intel HD Graphics 620 under the hood, along with 8GB RAM, and runs Windows 10 Pro. The 256GB SSD is a pretty respectable offering in this class. It’s safe to say that this notebook is a great all-rounder, packing enough punch to get you through intensive processes, while keeping itself cool and collected. Just make sure that battery is filled up to the top before embarking on a journey to Felicia the chronic chatter in HR.

The recommended retail price is R21,999, which is pretty hefty despite the solid specifications. That’s a tough price point given the competition, but if you’re a Toshiba fan you won’t be disappointed.