Fitbit’s got a lot of competition in the wearables market these days, from Apple in particular but also from everyone else who’s decided to put a collection of microchips into a wristband. Their answer to the latest lot of challenges is the Versa, the company’s second shot at an honest-to-goodness smartwatch.

And the Versa does a lot of things right. It’s cheaper than its immediate predecessor (and the competition), it’s better looking, it contains a lot of the features you want (and need). Here’s what you need to know. 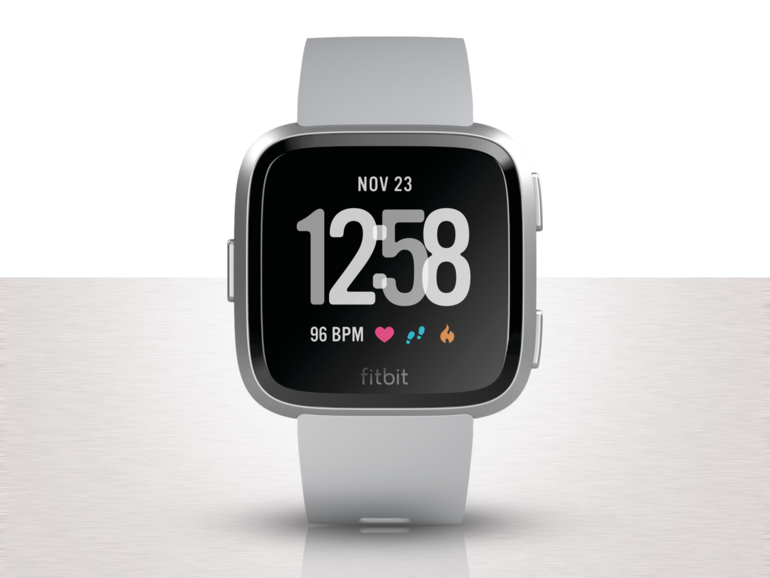 The Pebble Time Steel, if we’re being completely specific. Which, if you’re a certain kind of user, isn’t a bad thing. Fitbit’s first crack at this whole smartwatch thing, the Ionic, featured a design that might have seemed a little too… bold.

The Versa is a bit of a safer bet, in that it won’t jump off your wrist and assault onlookers with its tech cred every time an eyeball lingers on its shape. Rounded corners, a more sedate design which looks to be a stylish evolution of the blocky Blaze, and a selection of interchangeable bands means that the Versa will fade into the background a little more than its flashy, square-cornered predecessor. If you want a Fitbit Ionic right this very second you can have one for the princely sum of R5,000 — down from the R5,500 RRP the device launched at. If you can track down the Fitbit Blaze it’ll set you back anywhere from R3,500 to R4,500. Those are painful numbers for older wearables.

Or you could opt for the Fitbit Versa, which should be launching at the R3,200 mark (for the base version without the fancy leather straps). For a brand new Fitbit, that’s an impressive number. Too impressive, making us wonder what’s gone missing. The answer to that is: Not a whole lot.

It has all the features (besides baked-in GPS) We are almost as keen on built-in GPS in our smartwatches as we are in offline storage and Spotify support. Who wants to take a smartphone along on a run, after all? As it happens, the Versa doesn’t feature dedicated GPS, opting instead for something it called Connected GPS — which borrows your device’s GPS in order to facilitate tracking.

Which isn’t all that bad (see below). It’s got everything else, from continuous HR tracking to Fitbit’s sleep tracking tech to waterproofing (up to 50 metres) and built-in storage (with Deezer support, rather than Spotify). Not having an onboard GPS may mean that you need to bring your phone but it also means another thing. The Versa should have a decent battery life behind it, the claimed four-day battery should work out to two trips to the charger a week in practical terms. At most. The Fitbit Ionic manages around three days and that’s with a dedicated GPS chip in place. Remove it and the Versa should be able to manage at least four days on a charge.

Which should give you something to be a little snobby about when speaking to all those Apple Watch wearers whose devices can’t track their sleep because they need to be charged each night. Though we still wish that Fitbit had Apple’s app selection…

FitbitOS has been working out That’s not to say that Fitbit has been sitting and relaxing when it comes to their available apps and, more especially, the device’s interface. FitbitOS has been hitting the gym and has bulked up with a few new features.

Swipe upwards and you’ll find a new health dashboard, which gives you an overview of your major health stats — except for sleep. It’s here that the ‘female health tracking’ feature shows up as well.

If you’re using Android, you’ll be able to use the Versa to quickly reply to messages (before the iOS crowd gets the function). The offline storage on the device is reserved for Deezer, and there’s a three-month trial with the watch so you can get used to downloading and taking your tunes on the road before having to shell out any cash. Oh yeah, and Fitbit Coach is getting a fresh coat of paint as well.

There are a selection of band options on the way We’ve mentioned this before but Fitbit are going to be bringing out a whole mess of bands for the Versa. Exact availability isn’t known for SA yet, but in total the wristband is going to be getting five difference silicon bands, four leather straps, and a handful of mesh and stainless steel bands, letting you get your shape-shifter on if you’re heading directly from the gym to a business meeting.

We should know a lot more about which options are heading here when the Fitbit Versa and its smaller cousin, the Fitbit Ace, launch in mid-April. Stay tuned.