Fitbit’s got two new devices, the Ace and Versa, and is adding menstrual tracking to its software Wearables company Fitbit has announced two new devices, the Versa smartwatch and the Ace fitness tracker for children. The Versa is a pared-down version of the Ionic smartwatch while the Ace is a fitness tracking wristband that resembles the Alta, but is aimed at children. Fitbit has also announced a new version of its smartwatch operating system, Fitbit OS 2.0, that’ll bring new features like a health dashboard, the ability to reply to message notifications for Android users, and the ability to store music offline from streaming service Deezer on the Versa and Ionic. It’s also added new female health tracking features that’ll be added to the Fitbit App.

With the Ionic, Fitbit demonstrated its enthusiasm for the burgeoning smartwatch segment, currently dominated by Apple’s Watch. It’s not a bad start, and its four-day battery life and excellent fitness tracking make it a decent alternative for the fitness inclined. But as a smartwatch, the Ionic still lags far behind not just Apple, but Android Wear makers’ offerings and even Samsung’s Tizen-powered wristables. The problem is a limited selection of apps (around 550 now, compared to the thousands available for Android and Apple devices) combined with limited smart features. 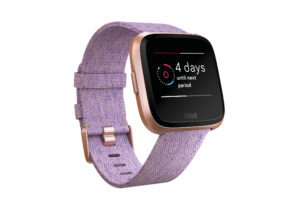 Fitbit’s evidently trying to address these shortcomings and it’s new OS (which will come to the Ionic, too) allows Android users to reply to message notifications and introduces new features like a health dashboard that gives the wearer key health info at a glance. The company is also taking the laudable step of including new female heath tracking features that will allow users to track their menstrual cycles and marry that data to other health data. There are plenty of apps out there for cycle tracking, but none that can tie the tracking to other health and fitness metrics like sleep patterns, resting heart rate and the like. Fitbit says the data could also help researchers, who’ve historically tended to neglect female health.

So, rounded edges aside, what are the differences between the Versa and the Ionic? The big one is that the Versa loses the GPS of the Ionic, which isn’t ideal as it means users will need to carry a phone to track walks, runs, bike rides and other outdoor activities. But the upshot is the other big difference: the price. While the Ionic retails for around R5,500, the Versa is expected to cost R3 200, which is substantially less than most other smartwatches.

In its release materials concerning the Versa, Fitbit also talks up a New Parent app that lets parents log their newborn’s schedule and compare it to their own mood, sleep and activity data. And there’s mention of Fitbit Pay, though given neither Samsung or Apple have managed to get local banks to rollout their respective mobile payment services we’re not expecting to see that one here anytime soon.

Like the Apple Watch, the Versa will be offered with a wide selection of bands, from the swim-friendly to the formal. Hopefully that means we can expect some new bands for the woefully under-served Ionic at the same time. While the Versa is chasing would-be smartwatch-owner adults, the Ace is after the youngsters. Aimed at children eight years and older, its a shower-proof, wristband with an LCD display that looks a whole lot like Fitbit’s Alta devices. It tracks steps, active minutes and sleep, should be good for up to five days between charges, and includes the same sort of hourly reminders to move that Fitbit’s included in most of its other devices.

Fitbit says it’ll soon be adding family challenges, too, so that children with an Ace can compete with family members in weekly step challenges. Parents will be able to control friend requests and other information on their child’s Ace from the Fitbit app.

The Fitbit Ace is expected to cost R1,500 when it goes on sale in South Africa in the middle of next month. The Versa is expected at the same time.